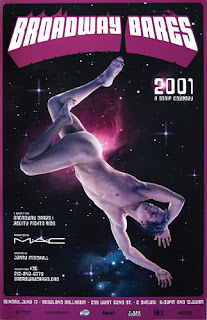 Broadway Bares XI: 2001: A Strip Odyssey
Directed by: Jerry Mitchell
When: June 17, 2001
Where: Roseland Ballromm
How much was raised: $338,000
Theme: Sci-Fi Movies
Opening Song: "Ride with Me"
Poster Model: Jonathan Sharp (Fiddler on the Roof, Dance of the Vampires, Carousel, The Rocky Horror Show)
Firsts: Michele Lee figured prominantly in the story line of the show, starring as Secret Agent 36-24-36, and Aerialists are featured high in the sky of the Roseland Ballroom. 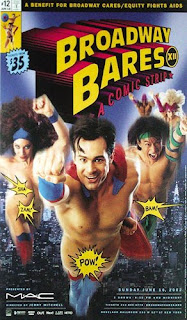 Broadway Bares XII: A Comic Strip
Directed by: Jerry Mitchell
When: June 16, 2002
Where: The Roseland Ballroom
How much was raised: $402,000
Theme: Comic book super heroes
Opening Number: "Comic Strip"
Firsts:  Jerry Mitchell collaborates with a team of choreographers.  There are over 180 dancers in the show.  Apost-9/11 NY finds the superheroes it needs at Broadway Bares. 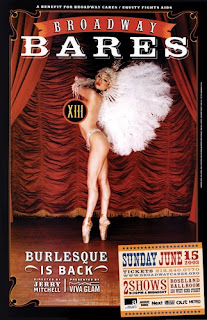 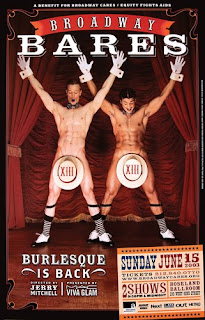 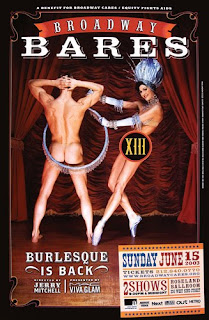 Broadway Bares XIII: Burlesque is Back!
Directed by: Jerry Mitchell
When: June 15, 2003
Where: The Roseland Ballroom
How much was raised: $455,000
Theme: Traditional burlesque
Opening Number: "Burlesque is Back"
Firsts: Multiple guest acts and hosts, including: Marrisa Jaret Winokur, Harvet Fierstein, Eartha Kitt and Jane Krakowski.  This is the last Broadway Bares that Jerry Mitchell will direct (to date). 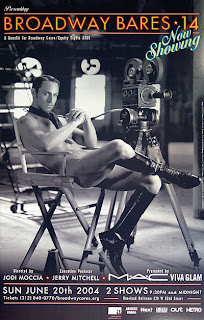 Broadway Bares XIV: Now Showing
Directed by: Jodi Moccia
When: June 20, 2004
Where: The Roseland Ballroom
How much was raised: $525,000
Theme: The Movies
Opening Number: "Coming Attraction"
Poster Model: Eric Otte (The Phantom of the Opera, La Cage aux Folles (2004))
Firsts: The first time Jerry Mitchell did not direct the show.  His long time assistant took over.  There are more than 200 dancers in the show for the first time.  And this is the first time the show made over a half million dollars! 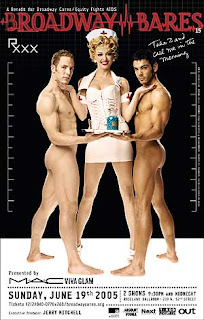 Comments? Leave on here or email me at jkstheatrescene@yahoo.com.
Jeff