The announcement today that the Roundabout Theatre Company will be producing a new revival of Anything Goes is exciting enough news, especially since they will be using the 1987 revival version.  But the icing on the cake is really that Sutton Foster will be starring as Reno Sweeney.  It will be interesting to see if she can pull off this crafty woman character.  Can she be edgy enough?  Does she have a mean streak?  For sure, Ms. Foster has shown that she knows her way around a strong woman character - her Jo in Little Women was a pillar of strength,  Millie certainly became stronger, and neither Janet nor Fiona were weak by any stretch.  But these were all inherently decent gals.  Reno is a whole different ballgame, and I, for one, want to be among the first to congratulate Ms. Foster for trying something a little out of the box that we are used to seeing her in.  For a great interview with Roundabout's Todd Haimes that addresses that very topic, among others, click here. 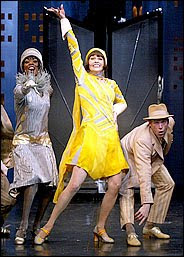 Thoroughly Modern Millie
And let me also be the first to jump on this bandwagon:  Before the press and the fans of the Rialto crucify her for trying something different, lets be thankful that she is making the stretch.  Let's not have another Chenoweth/Promises, Promises situation.  Let her get up there and prove she can do it, be happy for the attempt if she isn't to your liking, and thrill in her victory if she exceeds your wildest dreams. 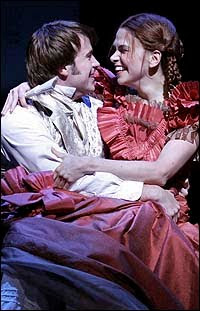 With Danny Gurwin in Little Women
In this day and age of professional actors complaining that Broadway actors are missing out on accolades to come and go Hollywood actors, we, as a community, need to support those actors who consistently stay around the theater instead of tearing them down.  How I feel about this current brouhaha following the Tonys is another blog entirely (coming soon), but I do know that we, as fans, aren't helping things when we don't suuport the artists we love.  If you are a real fan of someone, you support them win or lose.  And Sutton Foster (and folks like Marc Kudisch, Hunter Foster, and Kristin Chenoweth) deserves our support and thanks.  And, so, Sutton, congratulations on your newest starring role on Broadway! 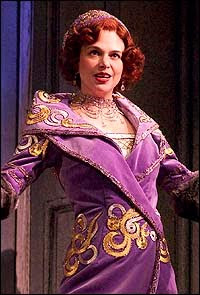 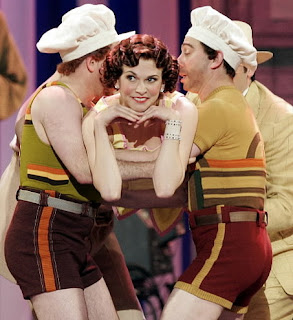 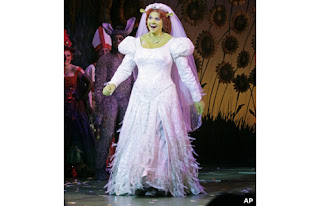 Sutton goes green in Shrek: The Musical
Just think, this time a decade ago, no one knew who Sutton Foster was.  Sure, she was an ensemble member in the '94 Grease, did some time in Les Miz, and savored the guillotine in The Scarlet Pimpernel.  But it wasn't until 2001-2002 that Ms. Foster began her certain-to-become legendary Broadway career, when she pulled a Shirley MacLaine and jumped from chorus cutie to the leading role in Thoroughly Modern Millie.  Roles in some underrated shows, star turns in others have kept her in the Broadway limelight ever since.  And I don't know about you, but every time she hits the stage I am scared some Hollywood producer with deep pockets will snatch her away from us.  But I think her track record speaks for itself.  Even if she did the movie/TV thing, she, like all the really greats ones - LuPone, Lansbury and even her contemporary, Chenoweth - would eventually be back sharing her gifts and her art with the live Broadway audience.

Welcome back, Sutton.  And bon voyage!