It is great to know that amidst all the ugly in the world - both the theatre world and the world world - these days, that there is still that little oasis of fun out there? For some it is a few hours in a movie theatre, for others it is a new book by a favorite author. For me, it is a Broadway show that I don’t have to do anything for but let it happen in front of me. I can get as emotionally invested as I want to, and I know that when it is over I’ll leave energized, happy and humming. Over the years there have been a few of those in my life, but over the last decade, that ray of sunshine has been Mamma Mia! 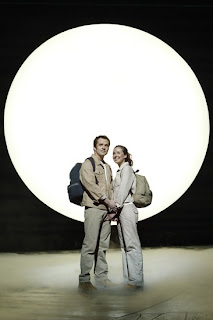 Corey Greenan and Liana Hunt
And, after a couple of years away from it, I am thrilled to report that the Broadway Company is as giving a performance with as much energy and commitment as the original cast. Sure there are differences in certain performances, and I’ve enjoyed some individual actors more other times, but as a whole the show is in pristine shape with a cast eager to please without relying on shtick or more campiness than already required by director Phyllida Lloyd or the book by Catherine Johnson. Anthony Van Laast’s exciting contemporary and very sexy dancing remains a highlight, especially given that the cast seems to literally be “having the time of their lives.” Given the relatively small and decidedly dull audience I attended with, I have to give them all credit for going on with it as if the audience was a mass of screaming fans reacting to every line. 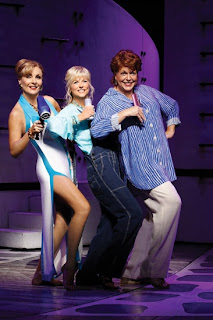 "Dancing Queens": McLane,
Brescia and Ferrall
One of the things I’ve always enjoyed about the show is its simplicity in every aspect. A couple of walls, easily moved beds, chairs and tables and few props adorn Mark Thompson’s setting allowing the focus to be on the action, not the idyllic Mediterranean setting. The cool blues and light brown stone pattern that dominate the set suggest warm breezes and the smell of sea air, the earth tone costumes suggest a communal, easy going life style, with the brighter corals, reds and oranges of the final scene bring an easy style and grace to a more formal occasion. Howard Harrison’s unobtrusive lighting design creates mood, gives focus and creates interesting shadows throughout, and his rock concert style lighting for the terrific finale are perfection. 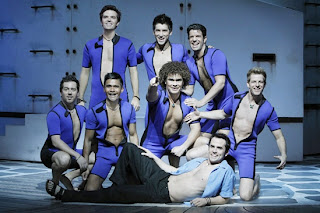 The Men of Mamma Mia!
So how’s the cast? Like I said, as a whole, they are spot on full of zing, broad smiles and what appears to be true joy. (If they are not really loving every minute of it, they are among the best actors on any stage today.) There are a couple of qualms I have with the current cast, but nothing that really detracts from the overall experience. Corey Greenan as Sky, is a handsome enough guy, but he looks a tad old to be Sophie’s contemporary. True, he is buff, and has a decent voice, so you can believe the attraction, but there’s just something a little off putting about him. Newcomer Liana Hunt as Sophie has all the requisite charm and sweetness, and goodness does she do the bubbly thing very well. Her voice, thought, is a tad thin for the rigors of “The Name of the Game” and she seemed to have to push to get the upper notes of “Honey Honey.” Still, she’s a cutie and is especially good in scenes where she has to deal with pre-wedding jitters and a mother that she butts heads with. Finally, John Dossett, perhaps the most experienced actor in the cast, attacks the role of Sam Carmichael with Shakespearean level gusto. It is particularly noticeable when he over does both “SOS” and “Knowing Me, Knowing You.” It isn’t Lear, Mr. Dossett. Take it down a notch or three. 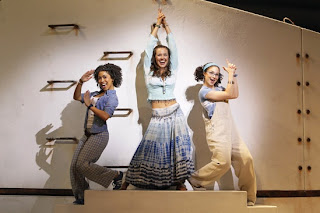 Halle Morse, Liana Hunt and Traci Victoria
The rest of the company is uniformly terrific. As Sophie’s best friends, Halle Morse and Monette McKay (in for Traci Victoria), provide a real shot of youthful adrenaline and really sell their scenes, particularly as the glue that holds the whole bachelorette party sequence. Their guy counterparts, Pepper and Eddie, are also terrific, nailing their jokes and dancing their feet off in both “Does Your Mother Know” and “Lay All Your Love on Me.” Andrew Chappelle, as Eddie, does a nice job with minimal lines, but more stage time in conveying a great friendship with Sky and as a decent worker for Donna’a tavern. The real find of the entire supporting cast, though, is Mark Dancewicz who, as Pepper, is the perfect combination of macho bravado, impish trouble maker, and lusty pursuer of cougar supreme-o, Tanya. Mr. Dancewicz’s charm and charisma fairly jump off the stage, and you find yourself following him in the large group scenes. He is a superb dancer and really shows it off in “Voulez-vous” and the kick ass finale. 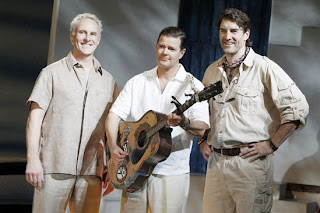 Three possible dads: Dossett, Thorell and Boll
As the other two of the three potential dads, both actors do a great job. Clarke Thorell, as Harry, is funny and charming. It is fun to watch him light up as he recalls his summer of youthful abandon, and his sincerity in trying to do right by Sophie is charming. Patrick Boll as Bill Austin (played as an American Cowboy/Indian Jones type rather than an Aussie) is all macho bravado with a heart of gold and a humorous take on some unmanly insecurity. You can’t help but like and root for the guy from the minute his lanky frame lopes into view. 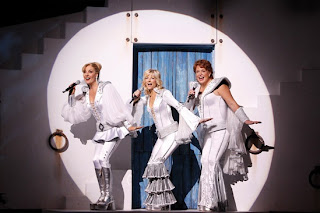 Sup-pa-pa Troup-pa-pa!
Mamma Mia! would be nothing, though, without a dynamite Donna and the Dynamos. The current production has a terrific trio. Perhaps most of note, for sheer longevity, if nothing else, is long time Tanya, Judy McLane, who has been playing the role for years. You would never know it. She looks as spontaneous and sharp as if it were her debut. Her ease with the role, her impeccable timing and her clear connection with her co-stars betray both a familiarity with the part, making it easy and fluid, and an attention to detail that makes it fresh. She is also particularly good at handling the young firecracker Mr. Dancewicz brings to the table. She matches him move for move, flirt for flirt, which is really saying something as she must do so in impossibly high stilettos and wedge sandals. Anne Edgerton (subbing for Gina Ferrall) as Rosie was as smooth and in the zone as her cast mates. One has to assume she’s done the role several times, she is so adept at it, all while finding her own moments and line readings. Her connection to Mr. Boll is terrific, fun, flirty and more than sexually suggestive without being too naughty. 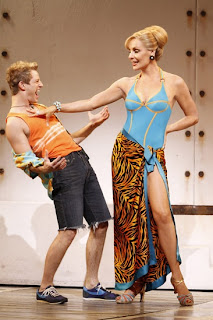 Dancewicz and McLane:
A boy and his cougar!
But the other big find of this trip to the show is the absolutely wonderful Lisa Brescia as Donna. Her electric blond hair, a wispy mess of windblown strands and curls one moment and perfectly coiffed for the wedding the next is a perfect metaphor for her electric performance. She takes us on a rollercoaster ride of emotions, equally interesting when enraged, letting her hair down, or being a solid mom. Best of all, you can easily see why Sophie turned out so well, and yet totally believe Donna’s decidedly more wild youth. You can tell she loves throwing on the spandex for both “Super Trouper” and the finale. And she does a nice belty “Mamma Mia,” But what, for me, anyway, makes or breaks any Donna is how well she does “The Winner Takes It All.” Ms. Brescia does an all out diva rendition, earning an extended hand from the conservative audience, bringing a tear or two to my eyes. It was a powerful and honest rendition. Brava! 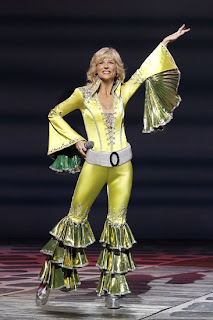 Lisa Brescia,
a Dynamo of a Donna!
In these tough times and in the weeks of dismal Broadway news lately, Mamma Mia! is sure welcome. If you haven’t been in awhile, this is a great cast to try and catch. And if you’ve only seen the movie version, get your dancing shoes on and get to the Winter Garden Theatre!

Comments? Leave one here, email me at jkstheatrescene@yahoo.com or Tweet me!
Jeff
2.98
Posted by JK at 6:31 PM