NOTE: Thanks to my guest blogger, Mike, who, during a recent business trip took in the National Tour of Rock of Ages, starring Constantine Maroulis.

Rock of Ages, which recently played a short engagement at Baltimore’s Hippodrome Theater, is saddled with the most predictable of boy-meets-girl plots, dialog full of bathroom humor, and a plethora of songs that barely fit the story and which are often cut frustratingly short when I would prefer to hear them in full. But the show itself also boasts a winning, if goofy, sincerity, conveyed effectively by a talented national tour cast. Given the title and branding of this show, potential audience members definitely know what they’re in for – a loud evening of 80s rock, big hair, and Constantine Maroulis – and, while it’s unlikely that anyone’s life was changed by this show, it’s also unlikely that many people left unsatisfied.

The plot of Rock of Ages is all about people recognizing who they are and embracing their destinies. Lonny, the show’s best character (played by this production's best performer, Patrick Lewallen), is both a club employee and a wry, fourth-wall-breaking narrator; the character gradually realizes that his fate lies with his club owner, Dennis (Nick Cordero), while the narrator acknowledges that being in a low-brow show can be a worthy experience. The flighty young German Franz (European, not gay, played by Travis Walker) overcomes outside pressures to open up his long-dreamt-of candy shop, and his imperious father Hertz (Bret Tuomi) comes to understand what it means to be a successful father. And of course Drew (Constantine Maroulis) and Sherrie (Rebecca Faulkenberry) come to know that the pleasures of a simple and honest life together far outweigh a dishonest life of semi-celebrity and shallow success. All of this is interesting enough, and at times touching, if not particularly original. 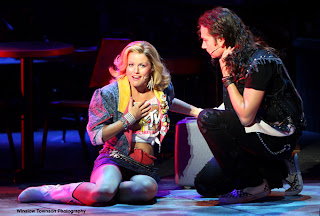 A few additional points regarding the book are in order. First, I’ve never seen a show where the second act so thoroughly outshone the first act (though I’ve seen several where the opposite was the case). Usually I enjoy the introductions and character development that happen in the first act of a two-act show, but in this case the first act seemed a little bit too mechanical in setting up situations to be resolved in the second act. Second, while I sometimes roll my eyes at the de rigeur inclusion of a gay plot line in almost every new show, I really appreciated the subversion of expectations when we find out that it’s the head-bangers rather than the swishy German who fill this slot in Rock of Ages. Finally, I’m of two minds about the very extensive use of Lonny as a knowing narrator, a character in a show who simultaneously recognizes that he’s an actor playing that character. Generally, I think breaking that fourth wall can be a pretty lazy device (as it is in The Language Archive, for instance), unless it is used sparingly and with great sensitivity. It’s certainly not used sparingly here, but there does seem to be a purpose to it, as when Lonny instructs Drew to forget about the book writer and follow his own path – a nice metaphor for those times when we feel stuck in a situation we can’t control, as if our fate is already sealed, when of course that’s never the case.

The score of Rock of Ages requires little introduction, cobbled together as it is from big hits of the 1980s. There’s “We’re Not Gonna Take It,” “Hit Me With Your Best Shot,” and, inevitably, “Oh Sherrie,” among many others; but did I mention that too many of them are left in mid-air to make room for another toilet joke? Unfortunately, this happened with two of my favorites, “More Than Words” and “Keep On Loving You”; indeed, few of the songs are allowed to be sung all the way through without interruption. Since I would hazard the guess that more people are coming to hear the songs than the dialog, I’m not sure this is the best choice. Still, the songs are, without exception, well sung and well-played, and a couple of them – “Every Rose Has Its Thorn” and the finale “Don’t Stop Believin’” – build up into exciting and energetic musical scenes. 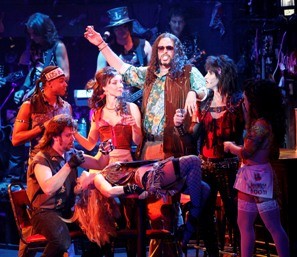 As Jeff will tell you, I’ve always been more interested in the score material than in performers. I notice fleeting details about a show’s score, but don’t always have as much to say about the performers unless they were shockingly bad or surprisingly good. I’m happy to report that there was no one in the cast to single out for the former reason, and two people who deserve special mention for the latter one. Patrick Lewallen’s performance as Lonny was the highlight of the show for me. I can see this being a confusing and perhaps annoying character if not handled with significant grace and charm, but there are no worries here: from the first moments of the show, Lewallen succeeds in bringing the audience into the show with him. Another standout is Rebecca Faulkenberry as Sherrie, blessed with easily the best voice in the show. Her character requires the greatest range, both dramatically (from simple Kansas girl to sleazy pole dancer) and vocally (from the gentle “More Than Words” to the muscular “High Enough”), and she certainly delivers. Her performance easily surpasses that of the other romantic lead.

Which brings me, of course, to Constantine. The character of Drew is a marginally talented vanilla-flavored wanna-be rocker. I see Constantine Maroulis as a seriously talented vanilla-flavored wanna-be rocker, so he’s more than up to the demands of the part. It’s hard to see how he got a Tony nomination for this show, but in truth that’s at least as much about the part as it is about the performer. No matter how high Constantine’s name appears on the marquee, Drew is simply too passive and boring to be the heart of the show.

Regarding the creative and technical elements of the production, there’s nothing too splashy, but it’s all pretty appropriate for the show. Beowulf Boritt’s unit set evokes various sleazy Los Angeles locales, including the interior of the music club, a strip bar, and a dilapidated urban neighborhood; Jason Lyons’ lighting design helps it achieve this flexibility, and allows it to fade into the background when it’s not needed, as during the driving scenes. Costumes (Gregory Gale) and hair design (Tom Watson) are pretty much dictated by the setting of the show, and are effective enough. I did enjoy the choreography by Kelly Devine, in a latter-day Broadway style that will be familiar to anyone who’s seen Legally Blonde or American Idiot. And director Kristin Hanggi’s keeps things running smoothly.

While Rock of Ages is not for everyone, if it’s something you think you might like, you’re probably right. Go and see it, because this national touring cast does the show full justice. If you’re looking for deep emotional and intellectual inspiration, you won’t get it here, but you will certainly leave with a smile on your face.

The touring company will resume performances after Christmas in Fort Lauderdale, Florida.