25 Years Ago: The Mystery of Edwin Drood

Long time followers of my blog will know this already, but The Mystery of Edwin Drood (later, just Drood) is one of my all-time all-time favorite musicals.  Top three easily.  In fact, it was the subject of a series of blogs that I did earlier this year and last.  (Links below.)

It was 25 years ago today that the show opened at the Imperial Theatre on Broadway.  It starred George Rose, Cleo Laine, Patti Cohenour, Howard McGillin and Betty Buckley in the title role.  Though it ran over a year and won 5 Tony Awards, including Best Musical, it was not really considered a hit, as it was soon dwarfed by the next wave of British mega-musicals, namely Les Miserables and The Phantom of the Opera.  Song and dance comedies were out, sweeping and epically produced operas were the new vogue for Broadway. 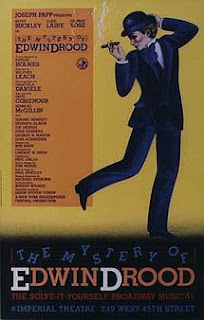 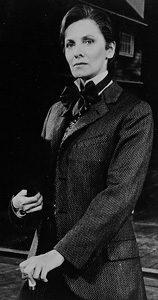 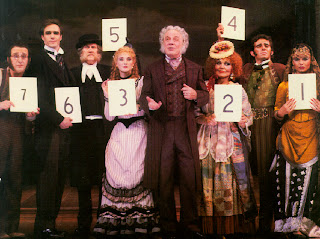 Betty Buckley as Edwin Drood, top, and the Suspects
I suggest, now, though, that maybe audiences weren't ready for a show like Drood.  Afterall, you had to watch an unfamiliar mystery to look for clues, keep track of actors playing actors playing characters, AND then decide who you think killed Edwin Drood, who the mystery detective, Dick Datchery, was, and then find out that Drood lives after all!  Today's audiences, who crave the minutia of complex stories like Lost and 24, and love to follow complete strangers and pick apart the details of their lives (The Real Housewives..., etc.), are really ready for the whole vote for your favorite ending (Dancing with the Stars, American Idol).  Yes, 25 years later, maybe Drood's time has come!  Let's hear it for a revival!  (I vote Angela Lansbury for Princess Puffer!)

But, until that time has come, and eventually it will... here are some video clips to remember the original by:


And footage from the actual production - including the most incredible held notes in any show ever - "The Writing on the Wall" (For my buddy, T.)