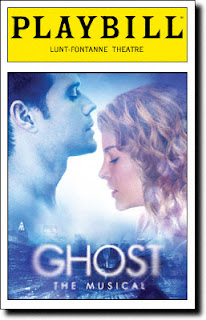 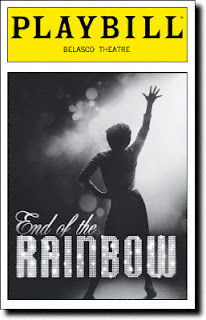 The two shows that closed this week had two different endings: the Judy Garland bio-play, End of the Rainbow finished where it started - at the bottom of the pile; Ghost: The Musical showed a decent, but not overwhelming bump at the BO and in attendance.  The big dropper of the week was Mary Poppins, showing its usual long-run merry-go-round summer box office, while the biggest gainer, up 10 on the chart, was Evita, which came with the return of Ricky Martin to the Marquis Theatre.  Porgy and Bess was up slightly, as was The Best Man, but they, like other shows getting ready to close, are showing a slow run down at the BO.  This coming week will have the departure of Sister Act on August 26, September 2 will have the closing of One Man, Two Guvnors and Tony-winner Clybourne Park, and September 9 is the closing date of The Best Man.  On the upside, a new musical, Chaplin, begins previews tomorrow.  Meanwhile, The Book of Mormon set a 39th house record at the Eugene O'Neill Theatre, with an average ticket price over $188 per.