If you've read any of my logo blogs, you know that I gravitate toward color, iconography and lettering style. The right combination will catch my eye, make me pause to look more closely, and make me interested enough to look into the show further.  A producer's dream, right?  Ah, but a lackluster, dull or overly busy icon with ill-fitting font styles always makes me wonder, "If the producers settled for THAT, what else have they 'settled' for in the production?"  Every once in awhile, a logo makes me do both - I'm interested enough to look closer, but oddly repulsed at the same time.

Such is the case with the logo for Chaplin.

As the logo has evolved, I've liked it more and more.  Two elements, though, have remained constant, and they annoy me to no end - I don't like to look at it too long because of them.  First and foremost, the bright yellow is not a comfortable shade to look at for long.  True, it catches your eye and no other current show logo features it so prominently, except the hideous Nice Work If You Can Get It.  Both are reasons to choose a bold color.  But not when viewers look away from it.  I read an article where the designer talked about it being "the natural choice" because it was reminiscent of Chaplin's sepia toned films.  Hmm... I've never seen anything in sepia tone in that shade.  Have you?  Black, white and gray shades or a brownish tint, but never bright yellow.  To see effective sepia see the logo for The Mystery of Edwin Drood revival. (And the bright blue of the lettering is not much better...I don't care how the yellow and blue fit on the color wheel.)

The other thing I can not stand about the logo as it stands today is the font style chosen for the title itself.  It is not evocative of the Chaplin era, Chaplin films or even Chaplin himself.  Instead, the designer has forced us to know that it is a musical being advertised by manipulating the letters into pseudo-musical notes.  They aren't exactly musical notes, but what else could they be, right?

I do like the lettering for the tagline, "The Big Musical About the Little Tramp" (they wisely seem to have moved away from the laughably lackluster "Look who's coming to Broadway!") and the subtitle, "The Musical."  The lettering is reminiscent of the 20's, and the tagline is a (somewhat) clever way to remind us of Chaplin's most famous character.


I also really like how they've gone from a cartoon-ish icon-style portrait of Charlie, and instead created an interesting visual that tells us what aspects of his life will be celebrated in the show, all of it springing from Chaplin's mind/bowler hat.  Weaving in and out of the image are things associated with the Chaplin we know: film star, motion picture icon, by integrating rolls of film and camera reels.  Top to bottom, we see a boy and his mother - it looks like he's leaving her; a young Chaplin kissing a beautiful young woman; and a mini portrait of another Hollywood icon, gossip columnist, Hedda Hopper.

Now I haven't seen the show yet, but I can guess that the show will incorporate Chaplin as a boy, Chaplin as a lover and Chaplin as a star -including the glamour of success and the dangers of the gossip columnists, who could make or break you with the single stroke of their pens.  Romance, glamour and intrigue sounds like a great combination to me!  Maybe the show will run long enough that they can re-do that image with pictures from the show!? 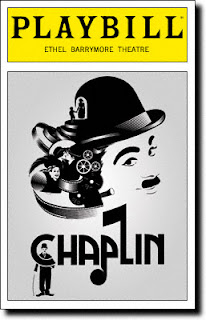 Normally, I don't like the black and white Playbill cover, but in this case, I think it not only fits the show, but it improves the logo immensely.

3.365
Comments? Questions? @jkstheatrescene (Twitter); jkstheatrescene@yahoo.com (Email); or leave a comment below and check a box!
Posted by JK at 12:01 PM