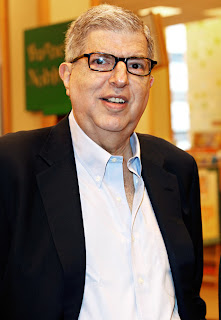 I remember getting my first copy of the Original Broadway Cast Recording of A Chorus Line.  I was in 9th grade and had just seen a touring production of the show, and I was in love with everything to do with ACL. I played that album so much that I had to buy a second copy.  Everyone in my family ended up humming, whether they wanted to or not, various songs from the show.  My mom's favorite was "Nothing," while my sister particularly enjoyed the crescendo of "One - Finale," and my dad got a lot of mileage out of the repetitive riff in "I Hope I Get It."  My favorite was "The Music and the Mirror," and I can still "hum" every note of the dance break from memory.  It is still the only Broadway score that everyone in my family can hear and recognize immediately.

That score, by the late Marvin Hamlisch, changed my life forever.  The show was the first one where I saw people like me talking about their lives openly and without apology.  But the score was the first that I actually learned from.  It taught me about themes and motifs being associated with characters and plot, variations on a theme, and just how catchy a Broadway show tune could be.  Then there is his way with a soaring ballad - starting out simply and building layer by layer.  The ones I loved the best, though, are the bouncy, catchy songs that are as fun to sing as they are to hum.


It was also the first in a love affair with a composer for me.  Oh, I've since become a fanatic about Sondheim, and long for the next works from LaChuisa, Guettel, and Pasek and Paul.  And I adore Kander and Ebb. But if it weren't for Mr. Hamlisch, I never would have started down this path/obsession.  His They're Playing Our Song was the first time I bought a recording based on who wrote it and not because I saw it.  I saw how the same composer could write something completely different, but still have a distinctive "sound."  Over the years, I managed to see two of his "flops" multiple times: Smile and The Goodbye Girl. To me, they weren't flops.  They were fun, with terrifically exciting scores.  The post-Broadway demo of Smile was my first "bootleg" and I treasure it still.  And I LOVE The Goodbye Girl.  I saw each three times.  And so, my love of "flops" began.  Sure, I loved the performances, saw through the glaring plot issues, and could argue that both shows deserve a second look for several reasons each.  But it is the score of each that I come back to again and again.

A lot has already been written about Mr. Hamlisch's accomplishments - Emmys, Grammys, Oscars, Tonys and the Pulitzer Prize; his associations with Barbra, Judy and Liza; his world-renowned reputation as a first rate conductor.  And it seems both appropriate and so sad that his most recent effort, The Nutty Professor, had its world premiere just last week, and that he was working on film scores and at least one other Broadway show.  It makes me smile to think he was busy right up until his untimely death on Monday.

But for me, and I bet for many other theatre fans, his greatest accomplishment is that he instilled in me a love for an art form that is often maligned and said to be dying.  By today's standards, his works may be considered old fashioned, typifying that "Broadway sound."  That's not a bad thing at all.

Thank you for everything, Mr. Hamlisch.  I owe you so much.  I'll be playing your songs for the rest of my life.

Jeff
3.344
Comments? Questions? @jkstheatrescene (Twitter); jkstheatrescene@yahoo.com (Email); or leave a comment below and check a box!
Posted by JK at 4:50 AM