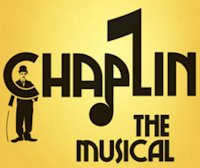 It is only mid-August, and this week will see the SECOND new musical of the season begin previews.  I'm talking about Chaplin, the increasingly buzz-worthy show about film icon and comedy genius, Charlie Chaplin.  The ball finally got rolling about a week ago when Michael Reidel decided to unleash his ugliness  on the show, commenting on a low advance (which is in dispute with producers) and the fact that the principal backers own a frozen food empire.  (Why her highness gives a damn about where the money came from is beyond me...)  You'd think he'd know that there is no such thing as bad publicity... ever since he tried to poop on the Chaplin parade, people are Tweeting, Facebooking, and every other social network-ing about it.  Since then, they've stepped up their visibility with features on Playbill online, and a very respectable showing at Broadway at Bryant Park.

But there are many reasons to give this show more than a passing thought.  First, its creative team could just be a perfect storm new voices and seasoned veterans.  Newbie Christopher Curtis provides the music and lyrics, while the book is by Mr. Curtis and 3 time Tony-winner, Thomas Meehan. Direction and choreography are by Follies, Finian's Rainbow and Hugh Jackman Back on Broadway vet Warren Carlyle. Tony nominee Beowulf Borritt will provide scenic design, while Broadway debutante Amy Clark  will supplement the costume designs already completed by the late legendary designer Martin Pakledinaz. And talk about seasoned: Ken Billington will, with Chaplin, be designing his 98th Broadway production. Jon Driscoll (Ghost, Brief Encounter) will be creating the projection designs.

The cast itself also presents a nice balance veterans and newcomers.  I, for one, am really REALLY excited to see Rob McClure as Chaplin.  I've had the pleasure of seeing is super performance as Princeton/Rod in Avenue Q, and can tell you the man has some serious musical comedy gifts.  The supporting cast includes four of my favorite performers, each constantly working and each on the cusp of stardom: Jim Bortlesman (a great song and dance man from Chicago, The Producers, and most recently, The Adams Family.  Christiane Noll seems to find work regularly - Ragtime, Urinetown, and Jekyll and Hyde are among her prolific appearances on Broadway. Wayne Alan Wilcox was terrific in both Carrie and The Normal Heart, and the always wonderful Jenn Colella (Urban Cowboy, High Fidelity, Lucky Guy) will play Hedda Hopper.  The principals also include  Erin Mackey (Wicked, Sondheim on Sondheim) as Oona O'Neill, Michael McCormick (Curtains, Kiss of the Spider Woman) as Sennett/ McGranery/Emcee, (Encores' Merrily We Roll Along) and Zachary Unger as Young Charlie/Jackie.

See?  There are plenty of reasons to be looking forward to Chaplin!