It was early summer 1988. The Tonys were over, and The Phantom of the Opera and Into the Woods were all the rage. I, like many theater fans, got my glimpse of Broadway shows from the Tony Awards, and that year, the show that really surprised me was the one I hadn't seen or really heard much about: Romance Romance.

To be completely honest, I was really interested because I saw Alison Fraser listed as being in it during the opening credits, and I was a fan of hers since she was a replacement in The Mystery of Edwin Drood, one of my (still) all-time favorite shows. When the number from R/R came on, though, I was immediately smitten with the guy in the tux and then in the jeans and purple shirt.  Man, was he hot!  And what a great singer!  I HAD to see this show.

Of course, I'm talking about Scott Bakula, a largely unknown actor, whose major stage credit at that point was an off-Broadway show called 3 Guys Naked From the Waist Down.  This was still a couple years away from Quantum Leap and just under a quarter century before his current hit, NCIS:New Orleans. 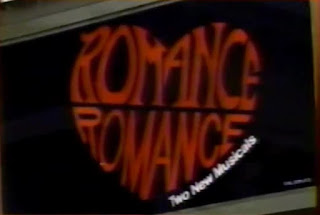 So, I booked my tickets, and my grandmother - a spry, sharp lady - and I went to see a matinee. We both loved the show, and exited the Helen Hayes Theatre on a musical high.  We stopped just outside the door and noticed that one of her favorite comedians, Joan Rivers, was playing in Broadway Bound, right across the street. She wanted to wait and see if we could see her coming out the stage door. So we stood there across the street, just waiting.  Mind you, we didn't want autographs, we just wanted to see her.

Now, in those days, the cast exited the Helen Hayes just like the audience did - through the house and out the front doors.  That little side alley they use today was not in use then. As we are standing there, my grandmother drops her Playbill.  I bend over to get it, and there's a shoe gently holding it down. I look up, and there's Scott Bakula, looking down at me. "Don't want that to blow away, right?" He smiled that crooked smile of his, and my heart was pounding. I was speechless. 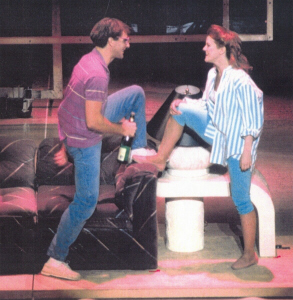 Grandma wasn't. "You are that nice young man in that show we just saw!" "Yes, ma'am." "Well, you were wonderful. This is my grandson. He's a big fan of yours." I was beat red, but loving it still.  "Well," he said, "it's always nice to meet fans.  Thanks for coming." I thought that was the end of it. Nope. He stood there and talked to us for a good ten minutes about other shows, where to eat for dinner, and that he was looking forward to an audition for a TV show.  We shook hands; he hugged my grandmother (her turn to blush). And we parted ways.

No crowd amassed, no police barricade. No pressure.  Just theater lovers and an actor sharing a few minutes of  commonality and kindness.  It never occurred to me to ask for an autograph. But I will never forget that wonderful memory. Neither did my grandmother. She was a huge fan of his until the day she died, and frequently recalled that warm afternoon.