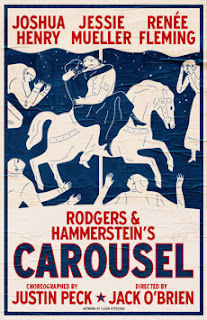 If there were a higher grade, I'd give it to the stunning logo for the current revival of Carousel. It is my favorite show logo in many years. I literally like everything about it, and I know I'm not alone.  It has been the talk of the chat boards for months, and even created a bit of a controversy when producers decided not to feature it in the Playbill for the show.

This design passes my "does this logo have enough oomph to make a passerby/potential ticket-buyer stop and consider the show" test.  In fact, the first time I saw it - at the back of the Imperial Theatre no less - I actually did stop dead in my tracks to look at it! (Much to the confusion of the people on the sidewalk while taking selfies mimicking the Hamilton silhouettes....) And the logo is just as breathtaking at the front of the theater.

The predominantly white design is easily noticeable, with the darker red and blue offering a sharp and powerful contrast.  The use red for the names, as well as around the blue letters of the title make all of the words pop.  One could make the argument that the colors also trumpet a distinctly American show.  Would that all such designs had basic common sense - if you can't easily read the words, you've lost more than half the battle.

The logo is also made to look textured, like an old-fashioned carnival poster hastily hung around towns at the turn of the 20th century, and looking like it has come unglued in places and showing some wear. Notice, too that the edges of the blue segment are cut in a wavy pattern, suggestive of both the ups and downs of a merry-go-round and the waves at the New England seashore. The blue segment also serves as a background for the logo's crowning glory.


By itself, the artwork by Cleon Peterson is stunning and thought-provoking. At first glance, you notice the riders Grecian urn-like on the carousel horses, which sells it right off.  But it is the closer inspection of the figures on and around the horses that is most revealing. Except for the couple in a passionate embrace on one horse, everyone else is in crisis. Despair can be seen in in figures laying prostrate on the ground or holding their heads. There is anger in the figures pointing fingers, desperation in the figure running with the knife, and the policeman handcuffing a man on the ground. In short, these are not people having fun on a ride.


Of course, this mirrors the plot of this dark musical very closely, no matter the given production. But the inclusion of figures not "on" the carousel, speaks to the fact that (especially in this production) the carousel itself is secondary to the cycle of life portrayed in the musical. Then again, given my "30-45 second impact of logo test," none of the detail, beyond it resembling the title carnival attraction, is as important as the easy, quick recognition factor.  And so this is a real winner: eye-catching, attractive, high, easy recognition draws you in; it is so engrossing that it makes you want to look closer at it, and there is even more payoff.  Bravo!

P.S.: I highly recommend that you visit the show website to see the logo in motion!
Posted by JK at 11:17 AM