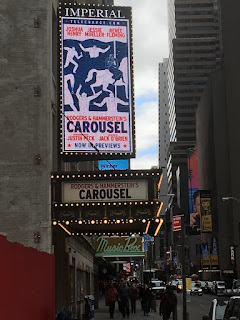 I honestly can't remember the last time I felt as inexplicably overwhelmed after a Broadway musical as I did following Carousel, which opened last night at the Imperial Theatre.  Perhaps it is because Rodgers and Hammerstein created a complex, thought-provoking masterpiece.  Or maybe it's because I had never seen any version of the show previously; a blank slate can be freeing when experiencing such a heavy piece. Whatever the reason(s), all these weeks later, this beautiful revival has been on my mind frequently.

One advantage of never having seen Carousel before (not even the film) is that I went in with no preconceived ideas of what should or shouldn't be and no beloved  previous production with which to compare this version. (I do understand coming to a revival with such baggage, however.) Because of this, I had far fewer qualms with this revival than those I've read about in the chat rooms. I had no trouble with the pacing of the show, and I didn't find a lack of character development (save for one minor character).

I saw a relatively early preview, so maybe a few things have been tightened up.  One thing that I think needed some re-thinking was the device of The Starkeeper (John Douglas Thompson), a mysterious figure who randomly appears and wanders wordlessly around the set. Having seen the whole show, I finally got what was going on with this figure, but the impression he gave from the start wasn't strong enough to care about and succeeded only in being an annoyance. That said, now that I know the whole arc of his story, maybe it'll be more interesting should I see it again. But the device may have worked better had the character made a more forceful impact at the beginning, then used more meaningfully at key moments in the story.  Similarly, a little more effort in balancing the sound (designed by Scott Lehrer) would have rendered some of the lyrics a bit clearer, particularly the verbally dense "June Is Bustin' Out All Over," our first brush with opera diva/superstar Renee Fleming, whose initial appearance as Nettie was somewhat diminished by muddled sound at the performance I attended. I'm happy to say that Ms. Fleming was a marvelously warm presence throughout the rest of the show. Her "You'll Never Walk Alone" was a tearful highlight of the entire afternoon.

I didn't miss a physical carousel. The actual carousel has stage time only twice, once at its peak, and later at its lowest point. (You have to love the literal up and down of this merry-go-round.) Most importantly, the carousel of the title isn't really about a carnival ride, but more so the carousel of life - yes, the ups and downs in the circle of human existence, life-death/heaven/hell.  To that point, everything about this production (take a close look at the figures on the logo even) from the design to the staging to the choreography supports this theme. And so it makes sense that the people themselves become the carousel, circling as rider and horse in various iterations of working, loving and joy, and later, despair and loneliness. 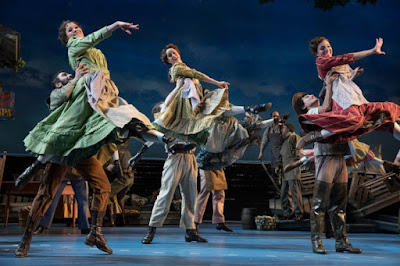 Even as early as I saw the show, director Jack O'Brien's staging was clear: balance the realism in the story with the fantastical Heaven framing device and extended ballets. One need go no further to see this balance than the opening "Carousel Waltz," where, during the aforementioned "dancer carousel" twirls, the lone physical horse of the carousel comes on stage and introduces the ill-fated Billy and Julie sharing a palpably steamy lifting embrace and smouldering stare. It is touches like these, along with well-paced stretches of dialogue and the virtually through-composed "bench scene," that keep things grounded. This serves the story well, as it not only balances the two narrative forces, but it also serves to lift up the fantasy as much as it brings it back to Earth.

Of course, all of that carefully presented realism would be for nought if the fantasy wasn't as stunning as it is.  And for that, nearly all of the credit goes to choreographer Justin Peck, who makes a thrilling Broadway debut.  Each of his pieces are raise-the-roof caliber - the traditional musical theater numbers like "June" and "Blow High, Blow Low" soar, and the extended ballet sequences (both the act one "Waltz" and the act two ballet) are mesmerizing and filled with emotion.  Not since West Side Story, has the dancing been so dense with meaningful storytelling. 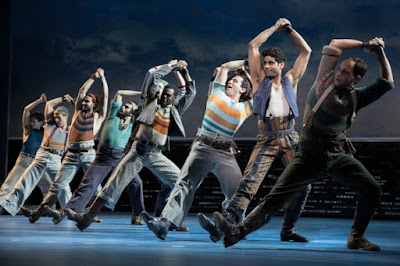 Both O'Brien and Peck are aided greatly in presenting both realms by stellar efforts from their design team.  Santo Loquasto's set is wonderfully old-school in the appropriately opposite ways from the rainbow-hued hyper reality of his work in last season's Hello, Dolly! Here, what needs to be bright is, what is supposed to feel dark and dangerous is. (I loved his tip of the hat to designs favored when Carousel debuted with the clever seaside back drop featuring models of boats moving slowly across wave shaped slits in the blue material.) Similarly, Brian MacDevitt's moody, colorful lighting is carefully balanced with his use of shadows.  The real technical star here, though is Ann Roth's consistently gorgeous costume designs. You can see every penny of the multimillion dollar budget.

Peck's corps of dancers is filled with some of Broadway and ballet's finest young talents, with Ryan Steele, Jess LeProtto and Andrei Chagas as standouts.  Both Amar Ramasar (as Jigger) and Brittany Pollack (as Louise) are superb dancers, nailing the required emotion, but are slightly less adept at the challenges presented by small, but pivotal speaking roles. A final note on the large ensemble: this week, it was announced that Actor's Equity is pushing for Ensemble categories at the Tony Awards. While it won't happen this season, the Carousel ensemble is exactly the type that shows the need for this award. To a person, they embody the very notion of a triple-threat.

The supporting cast is just as terrific. Margaret Colin manages in a few brief scenes to be a villain, a near-violent maniac and, ultimately, a broken, heart-wrenching pitiable creature; she does every facet with astonishing economy which pays off handsomely.  I've always enjoyed Alexander Gemignani in everything I've seen him in, and his well-sung turn as Mr. Snow is no exception. But the one featured performance of the show that threatens to steal the whole thing belongs to the exceptional Lindsay Mendez, who cements her place as a standout in the current crop of young Broadway talents. Her Carrie Pipperidge is a bright light every time she's on stage; her comic timing is razor sharp, and her empathy could be felt way up on the mezzanine. And, boy can she sing. (I'm kicking myself repeatedly for missing her in Wicked.) I won't be surprised to hear her named called come Tony nominations time.


Though considered a leading role, the part of Julie Jordan is rather small, and so whoever takes the complex character on has a lot of work to do in a small amount of time.  Jessie Mueller is up to the task. Julie's torment at facing the consequences for her actions, and importantly, her inaction comes across crystal clear, as does a full spectrum of conflicting emotions.  What little singing she gets to do, she does well, of course. And her chemistry with both Ms. Fleming and Ms. Mendez is natural and honest feeling. It is her chemistry with her co-star that has been the subject of heated debate ever since the first preview.  For my money, it is just what is called for - sexy, passionate, turbulent.

The real star of the show is the magnetic tour-de-force performance of Joshua Henry. He is a force of nature from start to finish, with a terrifying physical presence; his anger is blistering.  That consistent ferocity makes those brief moments of conscience, and later, fear, sadness and mortal panic have all the more impact. That his singing is amazing comes as no surprise - his "If I Loved You" duet with Ms. Mueller alone will make the cast recording a must-have. But nothing really prepared me for his breathtaking "Soliloquy." It was nothing short of miraculous. The man has the goods and then some.
Finally, for the elephant in the room: I had no real problem with what I understand is a revision of a key plot point. Julie Jordan's reaction to her daughter's questions about abuse worked for me. She could never bring herself to talk about it throughout her life, whether it was out of fear, shame, or even if she felt she somehow deserved it.  So it isn't that surprising, then, that she couldn't face her daughter; it makes sense that a woman who couldn't come to terms with loving a man who hurt her couldn't deal with it later in life. It is easy in today's #MeToo environment to be incredulous at this staging, and to be an observer with 21st century awareness and be appalled. Unfortunately, despite current strides, it remains a problem for victims who are unable to speak up. It isn't as if the recent shift in awareness has suddenly set everyone free, and it certainly isn't retroactive.  The fact that the show takes place at the turn of 20th century makes it only slightly easier to understand; a modern sensibility wouldn't exactly ring true with this show, no matter how much we want to tell Julie to own her pain and tell the world.

Sometimes the pat, "correct" solution isn't the best route. This ending for Julie should give you pause. It should make you sit up and say, "What!!??" And it should provoke meaningful post-curtain discussion. One of the best things this show does is provoke emotional responses. I got that and then some.