I decided instead of a considered, thought out review of the broadcast of Jesus Christ Superstar LIVE on NBC, I'd jot down my thoughts as the show is happening.  I mean, if they have guts to do the show live, I can have the guts to do this, too. 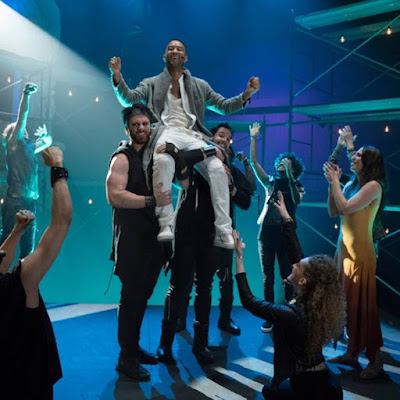 8:00 - Love the back wall. Already feels like a concert and a full show.  Are the Celtic Women in this? Live from the Winter Olympics...the lighting of the torch! Running around to give us something to watch during the overture... okay....  A chilling, theatrical entrance for John Legend... am oddly creeped out by the screaming audience...

8:05 - The audience is too loud...  Brandon Victor Dixon is good. Low key... not liking the costumes...looks they invited the cast of American Idiot and the Hair tribe to be the ensemble... by following the soloists so much, we can't see everything that is going on... choreography, adulation of Jesus, etc.

8:09 - "What's the Buzz?" John Legend has a great voice.  Ensemble guy with man bub: no one should look directly into the camera... give Sara Bareilles a pie! She immediately makes an impression.  A great one.

FIRST BREAK:  The leads, so far, are terrific.  The camera work is getting in the way.  The idea of adoring masses screaming and woo-hooing Jesus really works - points up the "Superstar" aspect of the show as written.  However, the audience really gets in the way most of the rest of the time.  Seeing them smiling in the background is completely at odds with what is happening in the foreground.

8:22 - "This Jesus Must Die" -  Norm Lewis and Jin Ha... intense! Some good acting going on here among the priests. The sound balance needs work.  If I didn't know the words, I'd have no idea what's going on.

SECOND BREAK: So far so good.  Mostly loving it.  Interesting how the staging/camera work has made Judas less of a focus. Not used to that.

THIRD BREAK: Catching my breath. I'm pretty sure we'll be hearing a lot more from Erik Gronwell. I hope so.

8:45 - "The Temple" - Love the cross and all the large glitter.coins implies.  Superb vocals all around... not sure cheering is appropriate when Jesus clears the temple... the masses writhing on Jesus at the center of the crucifix... amazing image.

FOURTH BREAK: I wish we didn't have to stop...

8:58 - Love the guitar intros after each break.

9:00 - "Damned For All Time/ Blood Money" Love the staging.  Can't put my finger on it exactly, but Brandon Victor Dixon isn't coming across... sings great, and I know he's a great actor... Actually, I get it. The camera direction every single time he's the focus is all over the map...movement, wide shots, focused elsewhere... until the end of "Blood Money." Nice. Finally.

FIFTH BREAK: End of Act One.  Fourth Break shouldn't have happened... these frequent breaks are a continued problem for live musicals on broadcast television 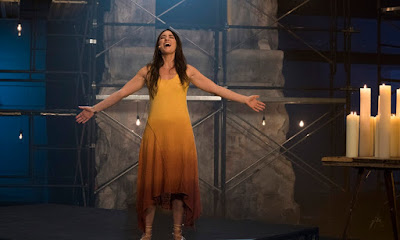 9:16 - "Gethsemane" - Holding my breath... mostly well-acted... give the man some water... not the best I've heard that sung, but certainly not the worst... fits the show and John Legend's performance... is he losing his voice?

SIXTH BREAK: We all need to take a minute after that...

9:26 - "The Arrest" Bless the silence during the Judas kiss...  best camera work of the evening with the reporters sequence. Eerie, given the current climate surrounding the media.

9:37 - "Pilate and Christ" Ben Daniels gives me the willies. Perfect, and he rocks the maroon leather pants.

9:39 - "King Herod's Song"  Alice Cooper. What else can you really say?  His charisma is more historic/legendary than his current presence. Mic drop.  Again, good use of crowd. Herod would lap up the crowd for sure...

EIGHTH BREAK: After Alice scrub down...

9:48 - "Could We Start Again, Please?" Sara Bareilles is sublime. The harmony... you go, Jason Tam - decent recovery from a few bad notes.

9:51 - "Judas' Death"  Does the director hate Brandon Victor Dixon? His performance here is what I've been waiting for from him all night and the camera seems to go out of its way to be crappy around him. Bizarre staging at end... and yet another terrible camera shot. I suppose there's something to be said for consistency.

NINTH BREAK: Glad to not have to watch more poor camera work.

10:01 - "Trial By Pilate" Chilling. See my above comment about Ben Daniels.

10:07 - "Superstar"  The orchestra is amazing.  Vocals are thrilling. Choreography is mostly hip hop aerobics and boring. Jon Rua should have done it. 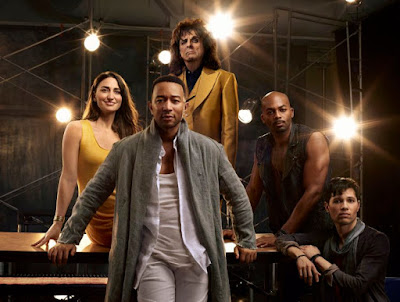 Uniformly excellent performances - Especially the three principals.  The orchestra was superb. This is a concert they say.

The camera direction was either excellent (the finale, a few other scenes) or an embarrassment (any time Judas was involved). The costumes were serviceable, but I've seen it all before. The choreography was simply not good and all of the dancing was all poorly filmed.