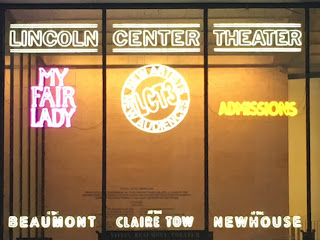 In the intervening weeks since I saw an early preview of My Fair Lady, my regards for it have somewhat diminished.  The things that stood out to me then, still do, and that's a good thing.  But the things that sort of tickled the back of my mind as slightly bothersome then, have grown to full blown nagging issues. I'm hopeful that master director Bartlett Sher has made some needed improvements during the near-month since I saw it.  Regardless, the show is in many ways a triumph, despite my qualms. 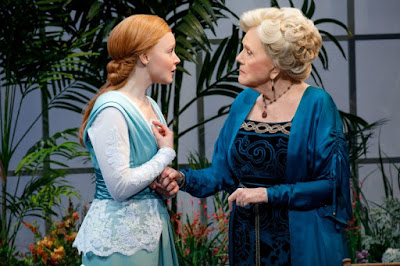 Sher's revival hits all the right buttons for most theatergoers. First, the costumes are fabulous in every single scene - Catherine Zuber should probably get her Tony speech ready (Sher is her good luck charm; she's won 4 times with his shows).  The "Ascot Gavotte" costumes alone make this worth seeing again.  The sets are fabulous in every single scene, from the frequently moving forced perspective to the jaw-dropping Higgins manse - Michael Yeargan should probably get his Tony speech ready, too (the man knows how to fill the cavernous stage at the Beaumont, and has won two Tonys with Sher).  Donald Holder's lighting is equally magnificent - the kind that even someone who doesn't understand lighting can recognize as excellent.  And one would be remiss not to mention that the glorious score is being played by twenty-nine wonderful musicians under the talented baton of Ted Sperling.  In short, this Sher show is technically top notch. 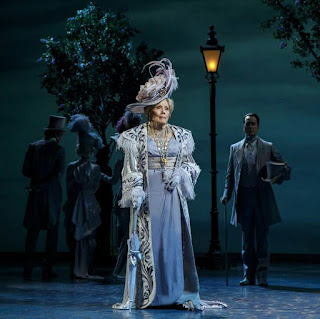 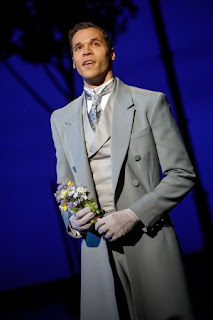 Performance-wise, the ensemble is excellent, moving easily between roles of both classes - key to the themes of the show - and to a person, each creates individualized background characters. Two of the supporting players also really stand out, especially notable because they are small roles.  Linda  Mugleston is a riot as the stern head housekeeper, Mrs. Pearce. And there aren't adequate words for the absolutely delightful force of nature that is Diana Rigg, who, as Henry's mother, held court in every scene she was in like a queen. She was beyond wonderful.

On the less successful end of the spectrum is Manu Narayan, who plays Karpathy as an unfortunately hyper-stereotype, which is particularly puzzling, considering how other aspects of this production go out of its way to be "woke." Then there is Jordan Donica who makes for a handsome Freddy, but, at least at the performance I attended, struggled to keep on pitch during the crowd-favorite, "On the Street Where You Live." But even more troubling, I'm not sure why his Freddy would be anything more than a pity date for the Eliza he's in love with. Allan Corduner barely registers as Col. Pickering; he is uniformly stodgy, and speaks lines that are meant to show a certain affection toward Eliza with almost zero warmth, and the age difference between he and Higgins, which shouldn't matter, somehow feels...awkward.  Even the one time he cuts loose, during "The Rain in Spain," he gets lost in the shuffle.

Then there's Norbert Leo Butz, a performer I generally love, who (and I'm pretty sure this will be an unpopular opinion) is not right for this role.  His performance is an odd mix of underplaying and scenery chewing.  "With a Little Bit of Luck" is mildly charming, but not the uplift one expects (and needs) at that point in the story. Conversely, his act two "Get Me to the Church On Time" is a master class in excess, and not just his performance of it.  But more about that later. It is only in his confrontation scene with Higgins late in the play that Butz gets to show off his acting skills.  All of a sudden, it becomes crystal clear what the real point of Alfred P. Doolittle is in the show, and it isn't funny. It is important.

Any production of this show hinges on the actors who play the My and the Fair Lady. Much has been made of the relative youth of  Harry Hadden-Paton as Henry Higgins, and frankly, it doesn't really matter, other than it makes him seem like more of a spoiled brat, which isn't necessarily a bad thing.  But by and large, no real insights are gained by this casting or by the actor's performance.  He's continually appropriate in the role, with no real missteps, but no real excitement, either. He sings the role slightly more than other Higgins I have seen, but even that doesn't do much to separate him from his predecessors. He's good, not great.

This production will probably be remembered for Sher's making the show more relevant by really making Eliza Doolittle the focus of the show with hardly a change to the script.  And his nod to #MeToo and feminism at the end is entirely appropriate. (And more easily successful than the troubling ending of Carousel.) Bravo to him for that, but the real kudos go to Lauren Ambrose, making her Broadway musical debut in this prime role.  She can do no wrong here.  Her voice is spectacular, and this may be the first time I've ever seen this show (and I've seen it many times) where I didn't hold my breath during "I Could Have Danced All Night" for fear that the high notes wouldn't be there. Her comedic timing is spot on, with not even a smidge of over-playing. If you find yourself not paying attention to others when she's also onstage (like I did towards the end), you will be handsomely rewarded: she is even spectacular off to the side.  I find myself already hoping she's here to stay for more musicals.  If the whole nearly three hour experience was just her, Ms. Rigg and the scenery, this would be one hell of a revival.

While I'm pretty sure this show will get tons of Tony love, it isn't without its shortcomings.  As spectacular as it is, the enormous Higgins house set begins to lose its charms once you've seen it all and begin to realize that there are lots of scenes there.  And, particularly in act two where it goes on and off what feels like every five minutes, and you watch it roll all the way from the back of the stage to the front. Over the course of the evening it probably adds ten minutes.  And the pacing of act two was generally sluggish to the point of near boredom.

But for me, the biggest misstep of the evening was "Get Me to the Church On Time," a crowd-pleaser to be sure, even if it stuck out like a sore thumb as the sole "big Broadway dance number" in the show.   Christopher Gattelli certainly puts his ensemble through a lot.  It is impossibly busy - think "Master of the House" on steroids, oddly athletic - think every number in Newsies, and very loud - I'm not talking volume entirely here.  While I appreciated the attention to detail with the Edwin Drood-ish ingenue-as-man character in the music hall setting, I found the totally unnecessary (and I'm not sure entirely accurate) full-on drag queens to be boorish. Gattelli doesn't have that much to do as this is not a dance show: even the ball is more about the dialogue than the waltz, and to dance during "Ascot Gavotte" would likely cause a riot.  So I can see why he tried to pack a ton in this one number. But the lack of restraint here only points up the rather staid, ultimately dull pace of the rest.

The gorgeous score, played and sung so well, plus large scale sets and hundreds of lovely costumes will please the masses, and Ms. Ambrose alone makes this a must-see show.  In fact, I left the show very happy.  But the more I think about it, the more wilted this classic flower feels.