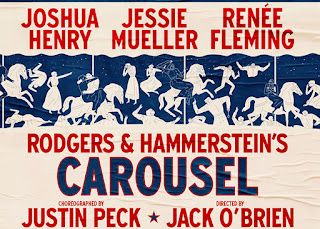 Love it (I did!) or hate it, the new Broadway revival of Rodgers and Hammerstein's Carousel is the talk of the Rialto these days.  Better to have people talking than ignoring it, right?  This week, we are looking to talk about the show in a much more carefree (if superficial) way.  Let's talk about how HOT the cast is - looks, certainly, but also talent, career trajectory, and overall charisma, too!  All season, your votes have qualified leading, featured and ensemble cast members for The Broadway Olympics, and you've awarded gold, silver and bronze medals to the casts of the seven musicals to open this season.  (Check them out HERE.) All of this is leading up to the BIG VOTE to see who makes the 2017-2018 Broadway Team!

Your task this week is to vote for Team Carousel in the Leading Actor, Leading Actress, Featured Actor, Featured Actress, and Male and Female Ensemble/Stand-by/Swing categories. The top three vote-getters win the medals; categories with fewer than three nominees will earn medals based on the percentage of votes received.

A few things to remember:
****MOST IMPORTANT! YOUR VOTES WILL NOT COUNT UNLESS YOU CLICK "FINISH SURVEY" ALL THE WAY AT THE BOTTOM OF THE POLL.  Since there are 39 cast members, you'll have to scroll pretty far down to hit that button!****

The poll will close on Monday, April 23!