I've been a fan of David Yazbek since his first Broadway score for The Full Monty.  I've loved every one of his subsequent scores, even the love-it-or-hate it Women on the Verge of a Nervous Breakdown. I've always admired his sense of humor and the way he gets at your heart, too.  His music always seems to fit the show he's writing for like a glove - a skill not a few Broadway composers could work on. He's three for three in Tony nominations for his full scores, and it's all but certain he'll soon be four for four.  And he could very well win his first with his beautiful masterpiece, The Band's Visit.  I've made no secret of my love for the entire production currently at the Ethel Barrymore Theatre, and the Original Cast Recording only makes me love it more. 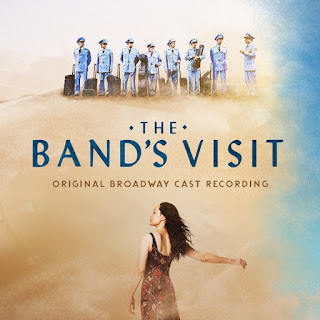 Where to start?  The music. It is so firmly entrenched in its setting and its characters, that to just listen to it gives you the feeling of being in the middle of nowhere in Israel. The complex orchestration of strings, percussion and such instruments as the oud, riq and darbouka is stunning on first listen, and becomes richer with each repeat listen. Bravo to Jamshied Sharifi's orchestrations.  Then there are the character-driven songs - the young Israeli vibe of "Papi Hears the Ocean" back-to-back with the American jazz styling of "Haled's Song About Love" is a particular highlight of both the score and the show.


Then there are the lyrics, which are clever, emotional and spot-on character wise.  There's something so evocative about "Omar Sharif"'s  "...on a jasmine wind...honey in my ears/spice in my mouth."  The motif comes up again in "Something Different."  And there is the signature Yazbek humor in the opening pair of songs, "Waiting" and "Welcome to Nowhere."  ("And blah...blah...blah" has weaseled its way into my every day speech!) And "Papi Hears the Ocean" is laugh out loud funny - "I smell like falafel/and my ears get hot/and I feel awful." And how about the hilarious resignation of "dead in a magical sea full of suck"?

I honestly play the whole CD pretty much constantly, but I do have a few favorites:

1. "Papi Hears the Ocean"/"Haled's Song About Love": How could you listen to one without the other? You laugh, you smile, you sigh.  And I love the performances by Etai Benson and Ari'el Stachel.

2. "Waiting"/"Welcome to Nowhere": Again another pair of songs that work so well together, as they establish the characters, situation and setting.  I just love John Cariani's tribute to laziness and his sofa, and how the whole company sings as one in the former - a real sense of community not heard again until the end of the show. And the masterful delivery of sarcastic boredom in the latter by Katrina Lenk gets me to smiling every single time.


3. "Omar Sharif"/"Something Different": Speaking of Ms. Lenk, she takes command of this recording just as she does the stage during a performance.  These songs are so filled with a swirling range of emotions: wistfulness, longing, desire, loneliness... and her delivery is impeccable. A star-turn on disc, just as it is on stage.


4. "Answer Me": Led by Adam Kantor's plaintive and gorgeous vocals, this song just stuns as much here as when you see the show live. I get a lump in my throat every time I hear it (and tears aren't that rare, either). And how can you not thrill to the sound of the entire company singing all together as the music swells?


5. Everything The Band plays: onstage and off...brilliant from start-to-finish.
Posted by JK at 7:30 AM