Logos: Harry Potter and the Cursed Child, Parts One and Two 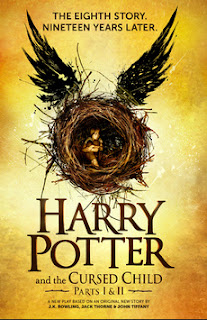 As someone who has read all of the books and seen all of the films, I am very excited about Harry Potter and the Cursed Child, Parts One and Two.  As a fan of the whole Potter-verse, I love the show's logo in all its iterations.  But I have to wonder if the logo will appeal to anyone who isn't a fan of J.K. Rowling's epic saga, and in this rare case, I can honestly say it probably won't matter.  I mean, outside of those folks who will go simply because it's the hot ticket, and a few see-every-play completists, this production really is for the fans. Let me say this from the outset, this logo - and especially its physical manifestation on 43rd Street - fits all my criteria for a successful logo.

First, black and gold will stand out - just ask Hamilton (and I'll bet not a few tourists will think they are somehow connected).  Second, the title will make people pause..."What is this new Harry Potter thing?  Do my kids know about this? I don't have kids, but I loved the books when I was young...this could be fun! My whole family loved The Wizarding World of Harry Potter, I bet they'll love this..." The brand sells itself. 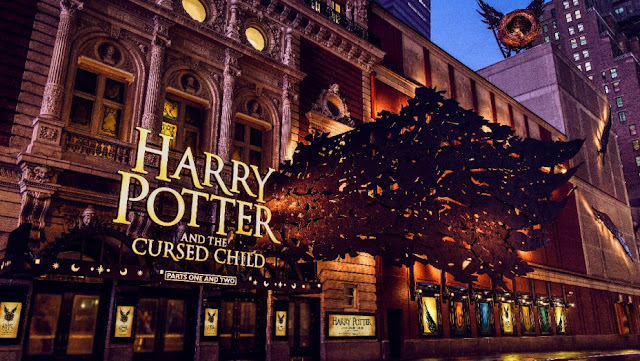 As far as the logo images go, the creepy black wings and that small child crouching in a nest of the logo certainly adds to the mystery and intrigue.  Of course, fans will recognize the nest/wing combination as a form of golden snitch. But the huge black wings are also reminiscent of any number elements from the series.  That sense of foreboding, that mysterious changing of the familiar, the over all sense of danger are all draws.  Audiences need to be intrigued to be willing to commit a large chunk of time and a large chunk of money. 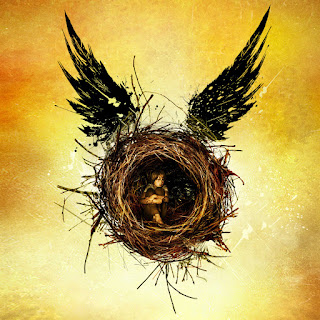 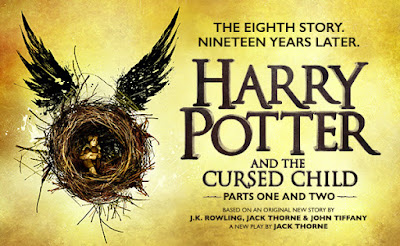 Finally, I think it is smart that the title is in the standard format of the beloved series - Harry Potter and the...- and it is also wise that they don't use the same font for the play as for the books and films.  It signals a maturity of our hero. Harry, Ron, Hermione and the gang are adults now. And just maybe this play is really for older Potter fans after all.
Posted by JK at 7:30 AM