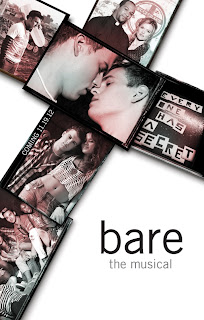 The tag line for the revival of Bare is "Everyone Has a Secret."  But being gay doesn't have to be.

October 11 is National Coming Out Day, and the theatre community is out in full force (no pun intended). They've been Tweeting, taking pictures, and, perhaps most importantly, sharing their own stories of coming out.  I wish that when I came out such support was available.  Not that it is ever easy, no matter how much support there is.  It is not something to take lightly.  If any of you took the opportunity to come out today, congratulations!  If you still aren't sure about how or when - or if you know someone who is struggling - take your time and give it lots of thought.  Just remember... you are not alone.

To commemorate the occasion, the cast and creative team of the upcoming revival of Bare spoke about their own "coming out," including director Stafford Arima, choreographer Travis Wall, book writer and lyricist Jon Hartmere, and cast member Taylor Trensch (Peter).  Another cast member, Casey Garvin (Zack) tells a poignant story of how Bare was a part of his own coming out.

Missi Pyle, who plays the nun in the show, calls herself a "straight ally," a growing and very important movement of people who identify themselves as straight, but decidedly pro-equality and there to support the LGBT community.  Members of the Broadway community who are straight allies include Steve Kazee, Audra McDonald, Will Swensen, Celia Keenan-Bolger, and John Ellison Conlee among many others.  Like I said, no one is alone.

Here's that video from Bare, followed by another video from the same event (courtesy of Playbill) in which Jason Hite (Jason) sings "Role of a Lifetime" from the show.  Impressive and heartfelt.

If you are struggling and need someone to talk to, click HERE.
For more information on Bare, click HERE.

Thank you to all of my friends, straight and gay, who support me and love me for everything I am.  Right back atcha!

Jeff
4.043
Comments? Questions? @jkstheatrescene (Twitter); jkstheatrescene@yahoo.com (Email); or leave a comment below and check a box!
Posted by JK at 9:15 PM