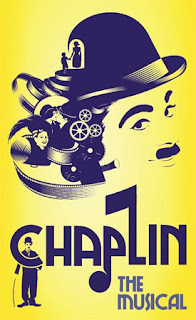 The man, even today, is an icon of the film industry.  And now he's a part Broadway history.

“ENCHANTING! When Rob McClure transforms himself into Chaplin's Little Tramp, it's a dizzying, multilevel metamorphosis." – Brantley, The New York Times

“A THOUGHTFUL and TOUCHING musical that WINS OUR HEARTS!”– NY1

Chaplin, the man who changed the way America went to the movies, is now the musical Broadway can't stop talking about!

This big musical about the little tramp marks the remarkable Broadway turn of Rob McClure as the legendary silent film star, and is choreographed and directed by Warren Carlyle (Follies, Hugh Jackman - Back on Broadway). Join us as America falls in love with Chaplin all over again.

Since Chaplin is about one of America's first media superstars, it makes perfect sense that the show is EVERYWHERE on the social network scene!  Find out all about the woman herself on this YOUTUBE video:

And now JK's TheatreScene has your chance to win a pair of tickets to the big Broadway musical Chaplin!

Answer the following 3 questions.  Put the answers (Letter AND Answer, Ex. B. Angela Lansbury) in an email with CHAPLIN CONTEST in the subject heading and send it to jkstheatrescene@yahoo.com.  Include your name and location.  Entries will be accepted until 6PM, on Sunday, October 14.  One entry per email address.  Duplicates will be disqualified.

BROADWAY AT THE MOVIES!

1.  This movie star was the subject of the 1991 Tony-winning Best Musical:
a.  Marilyn Monroe
b.  Jerome Robbins
c.  Will Rogers
d.  Gypsy Rose Lee

2.  All of the following films were made into Broadway musicals EXCEPT (this one is TRICKY!):
a.  Grand Hotel
b.  City of Angels
c.  La Cage aux Folles
d.  All About Eve

3.  Filmmaker Mack Sennett has appeared as a character in just one Broadway musical, Mack and Mabel.
a.  True
b.  False
THE DETAILS:
FIND OUT MORE ABOUT CHAPLIN VIA


Don't want to take your chances?  Click the discount tickets logo to your left and see it cheaper!


1.  The number of "n"s in next to normal PLUS the number of times La Cage aux Folles has been on Broadway MINUS The number of Tonys the revival of Evita won EQUALS 5    2+3-0=5

Jeff
4.040
Comments? Questions? @jkstheatrescene (Twitter); jkstheatrescene@yahoo.com (Email); or leave a comment below and check a box!
Posted by JK at 3:30 PM