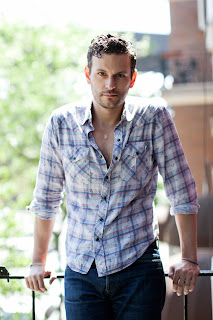 Over the past six years or so, Broadway and off- Broadway fans have had several chances to see the talents of  Wayne Alan Wilcox, who currently stars in Chaplin as Sydney Chaplin, brother of Charlie.  Maybe you caught him off-Broadway with Blythe Danner in Suddenly Last Summer or most recently in Carrie. If you haven't seen Chaplin, perhaps you saw him in The Normal Heart or Priscilla Queen of the Desert or in his Broadway debut in Coram Boy.

Fortunately, you 'll get the chance to get to know him even better, whether you've seen him perform or not!  Recently, I had the opportunity to interview Mr. Wilcox and ask him all about his career so far.  As you'll see, he's funny, thoughtful and open.  And it's one of the best interviews I've ever had to pleasure to do!  Here is the first half of that conversation - including a few of the questions some of you submitted.


JEFF KYLER (JK): What great two years or so you’ve had, huh?  It sounds to me like an actor’s dream!
WAYNE ALAN WILCOX (WW): Thanks, man!  That’s quite a compliment.

JK: How has it been to go from the all-star revival of The Normal Heart to the highly-anticipated revival/revised and notorious Carrie, and now a major supporting role in Chaplin?
WW: This is the easiest thing to answer.  Ready?  All I’ve ever wanted to do as an actor is have a career that allows me to play as many different, varied, opposite roles as I can think up.  I thought I was lucky when I first graduated from Boston University and I got a play.  Then it was a musical, and then a few more plays and musicals.  Then I got a television show, and I thought, “Yes! Yes! Yes! I want to do this, too!”  I mean, when I discovered that I COULD do more than just one thing, that I wanted to be more than just one character type or genre type… Is that even a thing, a “genre type”?  I guess it is.  There are models that do runway, and other models that do beauty ads, right?  Why not?  I digress. Then I got hungry to see how many different things I could do.

JK: Considering how vastly different the shows and your roles in them are, how do you adjust?
WW: Adjusting is the fun part.  Getting excited about all the new challenges and study (and, with a couple of parts, new diets and workouts), from one project to the next is why I decided I wanted to make acting and art my life.  Change is good; adjusting is always eye-opening.  As an actor, and as a person, we need it. How I adjust is by taking on the new role, new medium, new project by diving in from the start.  I’m not really afraid of doing something new.  I want to do it.  I want to learn it.  That’s how I adjust.

JK: Unfortunately, I missed your Broadway debut in Coram Boy. From what I’ve read, despite its short Broadway run, everything about it was epic.  Was your debut everything you dreamed it would be?
WW: You know, when I found out I got Coram Boy, I was already in and off-Broadway production of Suddenly Last Summer at the Roundabout, and I thought I was lucky but that it wouldn’t last.  Before that, I had been bar tending for awhile, and I was beginning to think that was gonna be my life.  I thought, “Yeah, I’m going to own and run my own bar.”  I was in a relationship that was not the best thing for my heart and my spirit, and I was trying to make that work.  It didn’t.  When we got to rehearsal for Coram Boy, there was a giant turntable in the rehearsal studio, and our director, Melly Still, started getting us into the world of that play.  It was this giant theatrical event, and I felt like a little boy again, like I got to play in this giant sandbox.  All of a sudden, I knew I wasn’t just lucky, that I had worked hard for this moment, and that I wasn’t going to run a bar. (I’d be terrible at it, I know.  I’d just want to give too many free drinks away.  I think everyone needs a free drink once in awhile.)  So, yeah, Coram Boy was a dream come true.  I knew that I was home.

JK: What did you take away from that production that stays with you to this day?
WW: From that show, I learned to trust my instincts.  Like I said, I understood completely that I wanted to do this for a living, and that I had earned that role.  I continued to trust myself, and it led me to a much more fulfilling and honest and thoughtful performance.  I call Coram Boy my little growth spurt because I felt like I came into my own a bit there.

JK: I remember the energy and raw emotion in the house throughout The Normal Heart.  Could you feel that from the stage?
WW: The Normal Heart was the most engaging play I had done up to then.  I mean, as soon as we came out on stage, from the first preview, you could feel everyone in the audience lean forward in their seat.  By the time we got to the end of Act 2, we all felt like we were carried through on the waves coming from the audience, and then they got to cry it out.  We heard sobs every night – not just whimpers, but big, grown man I-don’t-cry sobs.

JK: Considering the constant intensity of the piece, how did the audience help (or hinder) the company in getting through it so many times each week?
WW: The audience didn’t hinder anything.  (Except the ones trying to take pictures and bootleg videos.  Shame on you!  It’s live for a reason.) They were with us the whole time and their energy was electrifying.  They carried us through.

JK: The Normal Heart had a pretty swift birth on Broadway.  How was it having to get the show on its feet so quickly?
WW: Well, everyone showed up pretty much off book on the first day, to say the least.  George Wolfe is incredibly talented, and all of his energy was focused on getting the play up well and right.  He wanted us to do it well and right, too.  The short time that we had to do it in wasn’t really a factor once we all adopted his focus.  I mean, I’m sure the designers were tearing their hair out.  But the cast just knew we could do it, because George told us we could.  So, we did it.

JK: How was it to be a part of Priscilla Queen of the Desert?
WW: Oh, Priscilla.  Never in a million years did I think I would do that.  I always wanted to, but never thought I would.  Again, I wanted to stretch myself and play that different role.  And I got it.  And I did it.  And I loved it.

JK: The show looked like a TON of fun to do.  Was it as fun as it looks?
WW: Yes, it’s a TON of fun.  Everyone had a good time in that show.  And Tony Sheldon gave me a great gift for Chaplin.  He’s a gentleman and a scholar, and I hope we get to work together again.

JK: How does a guy from Tennessee find his inner-Aussie, and in drag no less?
WW: You can take the kid out of Tennessee, but you can’t take the Aussie drag queen out of the boy from Tennessee… [That was a] lame joke that should be saying I always had an inner Aussie drag diva in me.  I’m glad she came out and said, “hello.”  I hope everyone gets to let their drag diva out. 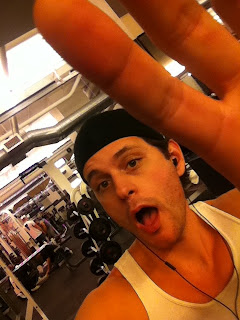 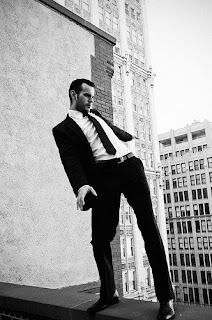 Talk about versatile!  He works out AND walks on high-rise ledges!

SHORT ANSWERS FOR READER QUESTIONS
Before I interviewed Mr. Wilcox, I Tweeted my followers asking for some short answer questions, and here are a few of them, from silly fun to pressing fan questions!

Mounds or Almond Joy?  Plain or Peanut MandMs? Fruit or vegetable?
Almond Joy.  Peanut.  BOTH! At least 3 servings every day.

The make-up in Chaplin: is it creepy to see backstage or is it as cool as it looks from the house?
It’s cool.  We all get a kick out of it.

If you could play any role in Chaplin besides your own, what would it be and why?
Charlie.  He gets to do so much cool stuff. 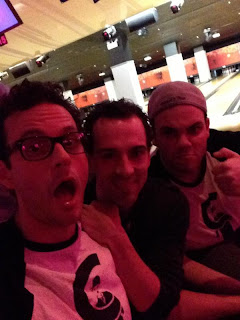 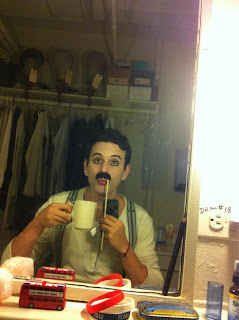 If your cast mates had to describe you in 5 words or less, what do you think they’d say?
Tall.  Eats.  Bowls.  Teacup.  Saucer.

(If you want to ask questions to Broadway folks in the future, be sure to “follow” me on Twitter and watch for the question request!)

Click the Chaplin logo in the left column to get a discount on tickets to see the show!

Look for Part 2 of this interview, including Chaplin dish and more of your questions, next week!

Before you go...
...have you voted in this week's HOT or NOT: THE MYSTERY OF EDWIN DROOD ENSEMBLE EDITION?  CLICK the show logo on the upper left column of the page!
...have you ENTERED to WIN tickets to GOLDEN BOY?  CLICK that show's logo in the left column to enter by Friday, November 2!
...have you met this week's FACE OF THE FUTURE?  She's a real headline-maker!  CLICK her picture in the right hand column to find out more about this Newsies gal!