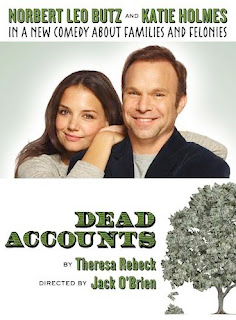 THE CONTEST IS OVER.  THE CORRECT ANSWERS ARE HIGHLIGHTED BELOW.  THANKS FOR PLAYING!

It's Monday, so it must be time for another contest at JK's TheatreScene!  This week is a very special opportunity!

The producers of  Dead Accounts want to invite you to one of the very first previews of this brand new Broadway play!

Written by Pulitzer Prize finalist Theresa Rebeck (Seminar) and directed by three-time Tony Award winner Jack O’Brien, tells the hilarious story of a brother, a sister, and a surprise reunion that turns their family upside down. A $27 million secret proves that the truth can be complicated. The show stars two-time Tony Award winner Norbert Leo Butz (Catch Me If You Can, Dirty Rotten Scoundrels) and Katie Holmes (All My Sons).  The cast also features Judy Greer (in her Broadway debut!), Jayne Houdyshell (Tony Award winner, last seen in the 2011 revival of Follies), and Josh Hamilton (Proof, Coast of Utopia).

MORE ABOUT THE SHOW

Answer the following 3 questions.  Put the answers (Letter AND Answer, Ex. B. Angela Lansbury) in an email with DEAD ACCOUNTS CONTEST in the subject heading and send it to jkstheatrescene@yahoo.com.  Include your name and location.  Entries will be accepted until 6PM, on Friday, October 26.  One entry per email address.  Duplicates will be disqualified.

1.  Jack O'Brien won Tonys for directing all of the following EXCEPT:
a.  The Coast of Utopia
b.  Dirty Rotten Scoundrels
c.  Hairspray
d.  Henry IV

2.  Theresa Rebeck is famous as a Broadway playwright and for working on this popular TV show:
a.  Glee
b.  The New Normal
c.  American Horror Story
d.  Smash

3.  The last BROADWAY PLAY Norbert Leo Butz appeared in was Enron.
a.  True
b.  False
A FEW MORE DETAILS:

... DROOD fans!  Check out the running results of the voting!  Scroll over the colors in the pie charts to see the statistics!


... have you checked out the NEW Ms. Broadway, BETSY WOLFE?  CLICK her pic in the right hand column!
... have you voted in the 2nd HOT or NOT poll for SCANDALOUS? CLICK the pic of Carolee Carmello in the left column!