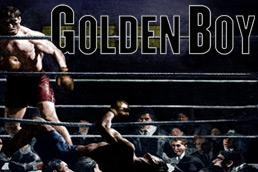 THE WINNER HAS BEEN SELECTED!  THANKS FOR PLAYING.  THE CORRECT ANSWERS ARE HIGHLIGHTED BELOW.

Another Monday (Sandy be damned!), another ticket giveaway from JK's TheatreScene!  This week, I've got two tickets to the star-studded revival of Golden Boy, set to begin previews on Broadway on November 8th.

Set in the vivid world of prizefighting’s past, Golden Boy, Clifford Odets’ most popular play, is the story of Joe Bonaparte, a promising young violinist who forsakes his family and artistic dreams for the lure of fame and fortune in the ring.  Bartlett Sher directs this 75th Anniversary production in the very same theater in which it premiered!

Answer the following 3 questions.  Put the answers (Letter AND Answer, Ex. B. Angela Lansbury) in an email with GOLDEN BOY CONTEST in the subject heading and send it to jkstheatrescene@yahoo.com.  Include your name and location.  Entries will be accepted until 6PM on Friday, November 2.  One entry per email address. Duplicates will be disqualified.

1.  Which of these Golden Boy stars has won a Tony Award?
a.  Danny Burstein
b.  Tony Shalhoub
c.  Seth Numrich
d.  Anthony Crivello

2.  This revival will be playing at the same theatre where the original production had its Broadway debut.  That theatre is:
a.  the Belasco
b.  the Lyceum
c.  the Cort
d.  the Longacre

3.  Golden Boy director Bartlett Sher helmed all of the following Lincoln Center Theater productions EXCEPT:
a.  Awake and Sing!
b.  South Pacific
c.  War Horse
d.  Women on the Verge of a Nervous Breakdown
A FEW MORE DETAILS:

... DROOD fans!  Check out the running results of the voting!  Scroll over the colors in the pie charts to see the statistics!
... have you checked out the NEW Ms. Broadway, BETSY WOLFE?  CLICK her pic in the right hand column!
... have you voted in the 1st HOT or NOT poll for THE MYSTERY OF EDWIN DROOD? CLICK the Drood logo in the left column!