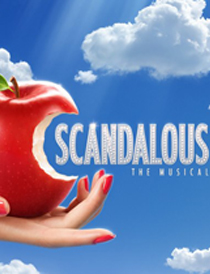 GREAT NEWS, SINNERS!  YOU HAVE AN EXTRA DAY TO ENTER!  BE SURE TO SEND IN YOUR ENTRY BY 6PM ON SUNDAY, OCTOBER 7!

Has an apple and a fabulous manicure ever looked so tempting and sinful?

Set in 1920s Los Angeles, holiness collides with Hollywood in the extraordinary tale of one woman's charismatic rise to fame. But as her popularity grows, so do her enemies, until her sermons, her celebrity and her past combine to put everything she believes in on trial. Two-time Tony Award® winner George Hearn leads a remarkable cast of 20 in this new musical about one woman's incredible rise to glory…and fall from grace.

Since Scandalous is about one of America's first media superstars, it makes perfect sense that the show is EVERYWHERE on the social network scene!  Find out all about the woman herself on this YOUTUBE video:


And now JK's TheatreScene has your chance to win a pair of tickets to the big Broadway musical Scandalous!


The voucher is good from October 16 through November 29, 2012, for the following performances ONLY:

Answer the following 3 questions.  Put the answers (Letter AND Answer, Ex. B. Angela Lansbury) in an email with SCANDALOUS CONTEST in the subject heading and send it to jkstheatrescene@yahoo.com.  Include your name and location.  Entries will be accepted until 6PM, on Sunday, October 7.  One entry per email address.  Duplicates will be disqualified.

1.  Broadway's most current scandal involves never seen investors, a possibly faked death, and a threatening e-mail.  And that's not the show's plot - it is the offstage drama!  What show?:
a.  The Mystery of Edwin Drood
b.  Kinky Boots
c.  The Performers
d.  Rebecca

2.  Near death experiences for cast members, months of previews, a fired director and several lawsuits.  The show is about to enter its 3rd year on Broadway!  Of course, I'm talking about:
a.  Catch Me If You Can
b.  Spider-Man: Turn Off the Dark
c.  Jesus Christ Superstar
d.  Love Never Dies

3.  Because she got fired during her turn at the role in Sunset Boulevard in London, all of the following actresses played Norma Desmond on Broadway EXCEPT:
a.  Betty Buckley
b.  Glenn Close
c.  Patti LuPone
d.  Elaine Paige

Jeff
4.035
Comments? Questions? @jkstheatrescene (Twitter); jkstheatrescene@yahoo.com (Email); or leave a comment below and check a box!
Posted by JK at 12:00 AM