TheatreScene Chat with Teddy and Alex: Alex Bares All!

Last week, one of this blog's best friends, Teddy Toye shared with us his experience as a swing in Bring It On: The Musical (Click HERE to read that!)  Today, I'm just as excited to share with you another "fast interview" with another of this blog's besties, Alex Wyse, who is currently in rehearsal for the upcoming off-Broadway revival of Bare.  In just 5 short questions, he brings up Patti Murin's waist, the genius of Stafford Arima, and how the OBCR of Follies changed his life.  And that's just a little of what's ahead!  So, without further ado... 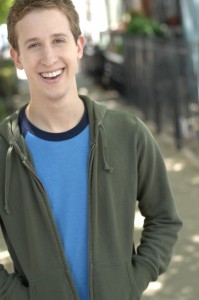 Question 1.  When we last chatted, you were mysterious about your next project.  Now, of course, we know that was the hit limited run of TRIASSIC PARQ.  I'm so sorry I missed it!  How was it playing a non-human AND female role?

Alex Wyse: Triassic Parq was such a special experience. Our director and co-writer Marshall Pailet led us on the most joyous journey. We never left the stage, we sang and acted our balls off, and that subsequent lack of balls helped us since we all played female dinosaurs. In the process of becoming these creatures, we adopted a universal dinosaur physicality to help unify our movements and give the show that prehistoric flavor. We developed our walks, the way we held our hands, and sometimes even our thought and speech patterns that might best befit a dinosaur living in our given world. But beneath that external mumbo jumbo, it was a very human story. It was a coming of age, a loss of innocence, a discussion of science vs faith, etc. This show was a lot more than a parody, and while we had a raucously good time doing it, it also felt like a meaningful story to tell. 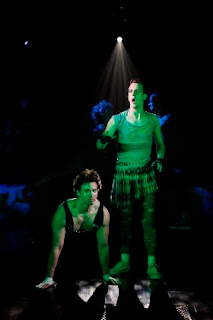 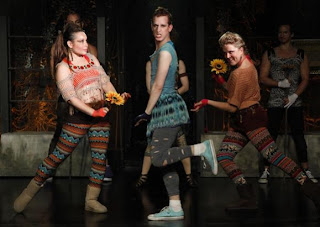 Question 2.  Such amped up, over-the-top comedy can be difficult to play.  How did that show both fit you AND stretch you as a performer?

AW: First and foremost, it tested my endurance. I don’t know that I’ve ever sung so much in a show - it was pretty non-stop for me. I was like the new Patti Murin. Except she has this waist that just won’t quit. It was great, though, to carry the majority of the vocal demands of the show. As a character actor, that isn’t a responsibility I’m often given. But I took full advantage of it, even giving up my Afternoon Martini Time, a serious blow to maintaining my esteemed place in high society. In terms of the comedy, we always approached it from the most honest place we could. Even when the jokes were coming at a mile a minute, we did our best to ground them in as much reality as possible (I guess as any good actor would do). Though sometimes it was difficult to keep a straight face when I was being raped by a T-Rex. But it all added to the challenge: Staying focused in the world while trying to have Patti Murin’s waist.

Question 3.  Now you are a part of the much-anticipated return of BARE.  You told me you weren't that familiar with the piece before getting the role, but that the reaction of people familiar with it has you excited.  What kinds of things have people said to you about it?  Why do you think the show means so much to people?

AW: A lot of people I’ve spoken with have said that Bare is what got them into theatre, or it even helped them come to terms with their sexuality. So it means a lot to be a part of a show that holds such a special place in people’s hearts. And now being a part of telling this story, I understand why it resonates so deeply with people. It’s a timely story about finding yourself, owning yourself, and moving forward. I wish I’d spent more time listening to it as a teenager, but I guess what really helped me understand myself as a fourteen-year-old was the original LP of Follies. 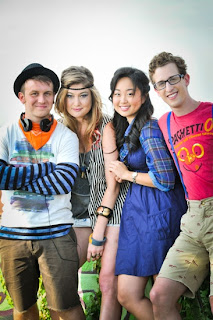 Question 4.  So, that photo shoot for BARE...the savvy promotions people keep letting a little more out of it as the weeks pass.  Knowing the show as I do, I can tell you that that unspoken bond between a "together" cast really makes the difference in getting the show's message across.  It looks like the cast is a lot of fun to be around, and all of you seem to have a great chemistry together.  Is that how it really is for all of you?  Has that carried over into rehearsals - especially considering the emotional difficulty of the piece?

AW: It was interesting doing those photo shoots. We hadn’t begun our process yet, we just showed up on a Brooklyn rooftop to snap some sassy pics. And those pics are fun, but the show will have a different look and feel to it. That was more of a “meet the sexy cast, and here’s Alex Wyse on the side.” But now that we’re actually into the process, I can say that we are creating a rich and realized world, and having a wonderful time doing it. The cast is a great group, full of energy and excitement. Some are just starting out, some have a bunch of credits under their belts, but all of us are banding together in a great way to tell this emotionally resonant story. Everyone so far has been positive, open, available, which is a testament to Stafford Arima, who helps to create that atmosphere. Granted, we’ve only just begun, so there’s still time for everyone to discover what a venomous vixen I can be.

Question 5.  I understand that the show itself has evolved and deepened since it was last in New York, and in regional productions over the years.  Though I'm not asking you to compare versions, what are some of the elements of this production that you think will resonate with today's audiences?

AW:  I know a lot of people are raising questions about the changes being made for this production. What is interesting is that so many people feel married to the original, or to the specific version they know best. Every version of Bare, from the original to the demo to LA to the licensed version has been different. Theatre is evolving. And the show had its issues back in the day. Why rehash the same old stuff? This has been a great opportunity for the team to make a new Bare for a new generation. There are lots of different songs, some different plot elements, new scenes, and new takes on characters. But what matters most – what people connected to in the first place – is the heart and soul. The heart and soul of Bare is going to be amplified even more by these changes, and that’s what the authors want the audience to take away.

And last but not least...  Please provide a caption for the picture below!  :-) 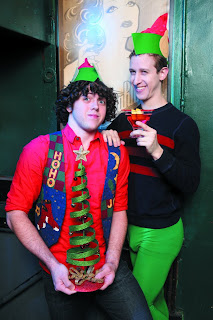 ALEX: My penis is screaming at Teddy Toye.

Thanks to both Teddy and Alex!  We'll hear from both of them soon, I hope!