She came back with a vengeance, that's for sure.  From a blood-drenched and campy oddball to a triumphant and transcendent Prom Queen, Carrie White returned to the New York stage like a pent up storm finally allowed to unleash her full fury and, yes, beauty.  Re-imagined from an overwrought unintentionally funny opera into an intimate examination of the ever treacherous American teenage landscape, Carrie is really about Anywhere, U.S.A., where "fitting in" trumps religion, personal growth and social responsibility.  The effects of bullying are in full view here, and despite the Stephen King-sized plot machinations, the message remains clear: there are only victims when people attack each other.

That Carrie was even revived is a thrill for this (and a lot of others) musical theatre fan, but that the score was finally recorded is the icing on a pretty terrific cake.  (Scroll down for the review!) 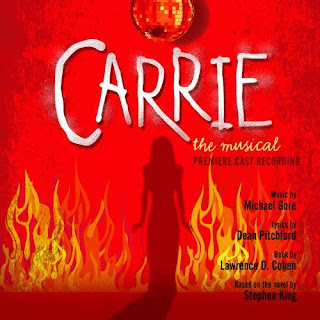 
THE TOP 5 REASONS WHY YOU NEED THIS CAST RECORDING

5.  We must support the continued preservation of musical theatre.  Long a cult favorite, and one of the most openly "bootlegged" scores in Broadway history, Carrie has fascinated audiences and enthusiasts alike.  Now, the score (and portions of the book that are included) as the authors really intended it to be has been preserved.  We, as a small but loyal group, must support this kind of endeavor every time we have the opportunity.  Not only does the creation of a cast recording of such a non-mainstream work preserve the work for fans, it also aids in creating interest in future productions.  Considering the ethereal nature of live theatre, these kinds of recordings keep alive that which is essential only here in the moment.

4.  Ghostlight Records has given it a first-class recording and presentation.  Fans of the show, not to mention collectors, will love this recording for the booklet as much as the recording itself.  It includes over a dozen production photos, some seen here for the first time, and the complete lyrics are here as well.  The essay by book writer Lawrence D. Cohen offers a telling, honest and unique first-hand account of the genesis of this troubled show - from the catastrophe in its London debut to the rare opportunity to re-examine and re-work a piece that the author feels so passionately about.  It goes without saying that the sound quality is superb - anything else these days would make headlines - even if it does expose the limits of the somewhat lean off-Broadway orchestrations.  Not that it is ever bad, one wonders how glorious some of the more ambitious sections would sound with actual strings and other instruments instead of synthesizers.  That small quibble aside, I have to share that since I got the CD, it has rarely left the rotation in my car and at work.  The more I listen to it, the more I find.

3.  Carrie has a rich, and at times, deceptively complex score.  The critics have often scoffed at the score, championing its operatic arias and duets in the mother-daughter scenes, while blatantly disregarding the more pop-driven numbers given to Carrie's classmates.  The music, by Michael Gore, and the lyrics by Dean Pitchford continue to have that dichotomy.  After all, Carrie White does live in two worlds at once - at home, under the harsh glare of mother whose love is blinded by a misguided religious fervor, and at school, under the equally unforgiving and even more judgmental stares of her peers at school.  The two contrasting styles of music remain from the original, but the balance between the two is much more complimentary while still striking.  Those amazing exchanges between Margaret and Carrie are as powerful as ever - "And Eve Was Weak," "I Remember How Those Boys Could Dance," and "When There's No One" are emotional powerhouses and epic even in their simplicity.  Now, though, the high school-centered numbers have been given more interesting and meaningful arrangements that place the characters rather than the emotions center stage.  The chilling re-do of the opening number, "In," with the student body as an eerie Chorus in this tragedy, in counterpoint to the individual lines of specific characters serve notice that the authors are taking all aspects of this world they've created seriously.  "Dreamer in Disguise," "You Shine," and the popular "Unsuspecting Hearts" offer not only sharp insights into the kids and their relationships, but all three are smoothly integrated throughout the score, meaningful motifs all.  "The World According to Chris," which does, ultimately, reveal the pain that drives the bad girl who ruins the prom and brings Carrie's wrath to bear, is the one real misstep in the score.  It is too poppy and bouncy for its own good; in this instance, the contrast between sound and content ends up being a campy reminder of what Carrie one was. The rest of the score almost makes you forget the past.

2.  The supporting cast is full of up-and-coming musical stars, all of whom add to the intensity of the piece with sharp characterizations and excellent vocals.  This is one of those productions people will talk about if for nothing else than the phenomenal company.  Even in the few months since Carrie closed, several of the cast members have gone on to bigger productions.  Good girl Sue, Christy Altomare, is currently Sophie in Mamma Mia!, good guy Tommy, Derek Klena, went on to star in Dogfight, while bad girl Chris, Jeanna de Waal is touring the country as Glinda in Wicked.  Wayne Alan Wilcox, who played Carrie's English teacher is now playing Sydney Chaplin, Charlie's brother in Chaplin, and ensemble members F. Michael Haynie and Andy Mientus are currently appearing in Broadway's Wicked and TV's Smash, respectively.  Klena and Altomare's duet, "You Shine" is a welcome addition to the score.  Carmen Cusack is a real gem here, both in her short book scenes and the terrific "Unsuspecting Hearts." On this recording, they all, to a person, offer full characterizations and well-sung performances. 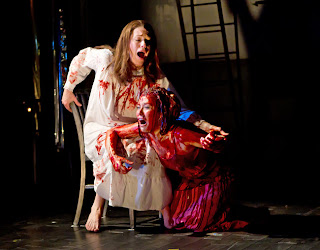 1.  The performances by Marin Mazzie and Molly Ranson are reason enough to buy this recording.  As much as I truly love Betty Buckley and enjoyed the work of Linzi Hately in the original, Marin Mazzie and Molly Ranson really deliver the goods here.  Every time they are on, the hair on the back of my neck stands straight up and I am riveted.  Mazzie's powerful performance is as chilling and dramatic here as it was live - "And Eve Was Weak" sets a new standard for theatre arias.  Ranson breaks your heart every time she opens her mouth - her take on the title number is a thrilling tour de force, and her entire performance during the prom sequence is a carefully constructed emotional rollercoaster.  That said, some of the best moments on the entire recording are the moments the two speak and sing together.

Finally, Carrie is what it should have been in the first place: the story of a singular, special and misunderstood girl, and the bigger story of the effects of judging others just because they are different.  It still isn't quite perfect, but this recording should go a long way in helping Carrie take its rightful place in the American musical theater canon.

... DROOD fans!  Check out the running results of the voting!  Scroll over the colors in the pie charts to see the statistics!
... have you checked out the NEW Ms. Broadway, BETSY WOLFE?  CLICK her pic in the right hand column!
... have you voted in the 1st HOT or NOT poll for THE MYSTERY OF EDWIN DROOD? CLICK the show logo in the left column!

Jeff
4.055
Comments? Questions? @jkstheatrescene (Twitter); jkstheatrescene@yahoo.com (Email); or leave a comment below and check a box!
Posted by JK at 12:01 PM