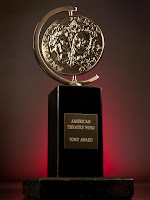 I can't believe it's Tony time already! As has been tradition over the years, my theater buddy, Mike, and I offer our thoughts on who we think SHOULD win the coveted spinning medallion, and who WILL win.

This year, we didn't get to see as many shows as we'd like.  We did make it to: Angels in America, The Band's Visit, Carousel, Frozen, Mean Girls, My Fair Lady, Once On This Island, Prince of Broadway and Three Tall Women. As far as musicals go, the only "big" one we missed was SpomgeBob SquarePants (at least so far), and, as far as plays go, we have plans to see Harry Potter and the Cursed Child in February. As such, we only made predictions ("should win") for categories where we saw the majority of the nominees.

Will this finally be the year that I get more right than Mike?

So, without further ado...

We both feel confident that we saw all of the acting in a play award winners (Andrew Garfield, Glenda Jackson, Nathan Lane and Denise Gough), and both of the winning revivals (Angels in America and, since we saw all three nominees, the eventual musical revival winner).

We both also agree that we'd love nothing more than a complete sweep by The Band's Visit, and for Once On This Island to win best revival of a musical. Finally, we also agree that SpongeBob SquarePants  could be a spoiler (and we are concerned that we have really missed out on something).

Perhaps a trip to Bikini Bottom is in the future, after all,

Best of luck and congratulations to all of this year's nominees!