At the Stage Door: Pippin 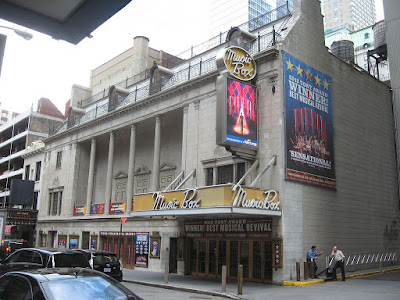 A few weeks ago, I shared my stage door story of meeting Scott Bakula outside the Helen Hayes Theatre after Romance/Romance. Today, I thought I'd share a pair of experiences Mike and I shared one late spring weekend a few years ago.

The scene: the sidewalk in front of the Music Box Theatre on W.45th Street.  Pippin was all the rage, and we were seeing it for a second time that weekend.  The matinee had just ended, and we were just standing around, trying to decide where to eat. (I don't know about you, but we frequently plan New York trips, but never seem prepared with meal plans...)

Anyway, we were milling about, and some of the cast re-emerged, free of the autograph and selfie crowd.  Among them was one of my all-time favorite actresses, Charlotte d'Amboise. We smiled at each other, and she offered, "Andrea [Martin] doesn't come out between shows." I told her we weren't waiting for anyone in particular, but that I was thrilled to get the chance to speak with her. Our brief chat included talking about seeing her in A Chorus Line, Cats, and Damn Yankees. She seemed both surprised and pleased that I saw her in Jerome Robbins' Broadway. She laughed, "That was quite an experience!" She was particularly pleased that I remembered her playing Anita in the West Side Story suite.

Not wanting to take any more of her time, we turned to go, and we literally bumped into the original Pippin, John Rubinstein. I was so surprised I kinda mumbled something like, "You're the original Pippin!" He chuckled and said, "I sure was! Did you love this show?" He pointed to the poster on the wall.  We nodded. "That was really something.  I loved it, too!" We shook hands. I stumbled away, very excited and thrown.  Weeks later, he joined the revival, this time as Charlemagne. 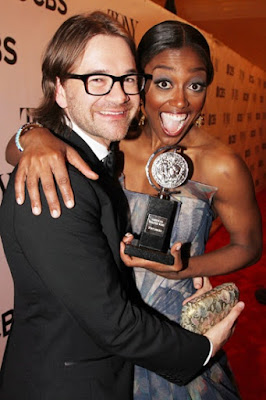 As we headed toward Times Square, talking excitedly about how nice and unexpected that was - and still not decided on where to eat - we had another surprise encounter. Patina Miller was walking toward us, holding hands with a guy. We sort of paused in our tracks and smiled at her. "Did y'all like the show?" We both exclaimed, "Yes, we did!" And we all laughed. We congratulated her on her Tony Award, and she introduced us to the man she was with, David Mars. Turns out, it was the man she'd end up marrying and having a family with. To be honest, I'm not sure who enjoyed that chance meeting more - me and Mike, Patina Miller, or David Mars. She seemed genuinely pleased to talk to us, we clearly adored her, and he looked so proud to have her be recognized. She is one of the nicest people I've ever met.

Meeting these people was the icing on the cake - that revival of Pippin is one of my all-time favorite productions.  And just as with Mr. Bakula years before, it was the way it casually happened (and probably because I didn't ask for anything from them) that made it special and way more personal than standing against a barricade waving a Playbill in their faces.

As great as that was, though, my all-time most thrilling stage door encounter also happened at the Music Box Theatre. But that is a story for another time...
Posted by JK at 7:30 AM