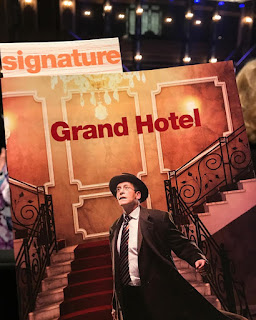 I'm sure that many of you have been in this predicament: you have a favorite Broadway show that you love so much that you saw it many times during its original run and national tour. That version is seared into your mind. Then the years pass, and you finally get the chance to see it again in a new, professional production. And you are excited. But also scared, fearful that it couldn't possibly live up to your memory. 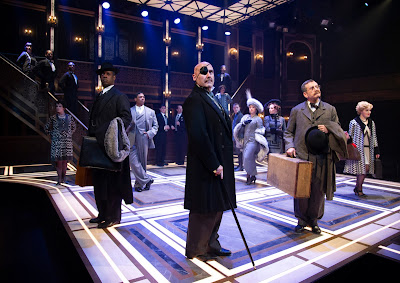 Such was the case when I entered Signature Theatre's Max space to see their Grand Hotel: The Musical. Was it as thrilling as the Tommy Tune classic? No. But it was nearly as wonderful, proving that different doesn't have to be bad  or "less than." The fact is, this Eric Schaeffer-led revival goes a long way towards showing that this musical stands up to time, and can more than stand on its own sans Tune.

As the lyrics go, "round and round, music constantly playing..." and the show does just that, between the vibrant, constant motion of Kelly Crandall d'Amboise's jazzy, snazzy and really sexy choreography, and the truly exceptional orchestrations of Paul McKibbons (he made seven instruments sound so full!) and superb musical direction of Jon Kalbfleisch. Add in solid, varied staging by Schaeffer, and this seamless production sizzles and flies by. Just as exciting is the visual feast the physical production provides. Colin K. Bills' moody, often sensual lighting signals mood, while Paul Tate Depoo III's immersive, luxurious set surrounds and draws you in (the floor is practically a character in and of itself). There is an elegance about the whole thing - lovely, crystal sconces line the walls, gorgeous wallpaper soars from floor to ceiling, and tall staircases reach to high, arched alcoves, while scenes change with subtle shifts of bronzed panels. And that floor! In an ingenious take on the original film and in stunning contrast to scenery, Robert Perdziola's opulent costumes are all in shades of black, white, grey, and, occasionally, silver. The characters are in black and white. Brilliant. 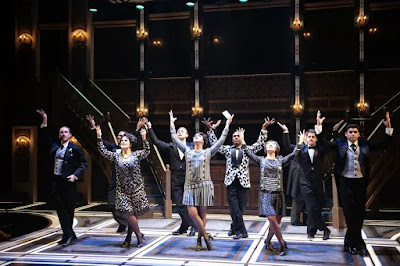 Grand Hotel is a truly ensemble piece, and its success hinges on that. As for the ensemble-within-the-ensemble, the eight cast members who play multiple roles - scullery, hotel staff, guests - sing and dance their way through life with a cool intensity bordering on desperation. They are compelling. The main core of ten characters, of course, each get their moment to propel the story, and each are successful. As all of them say (several times each), "time is running out," and each gives a performance tinged with varying levels of the aforementioned desperation. It thrills, motivates and gives the whole thing an edge of your seat excitement.

As the naive, scared to breathe bell hop, Erik, Nicholas McDonough is sweet, and the two baristas, Jimmy 1 and 2 are played with panache and haughty flair by Ian Anthony Coleman and Solomon Parker III. Their "Maybe My Baby Loves Me" sizzles.

As the above board turned morally compromised American business man, Christopher Bloch is by turns fatherly and predatory, and made the hair on the back of my neck go up as he sexually assaults his secretary. A tough assignment well played. The devoted companion to an aging ballerina is another difficult role - balancing duty with forbidden love is tricky - and Crystal Mosser really delivers, particularly in the final moments, and her "How Can I Tell Her?" is a highlight that stands out like never before. The narrator of the piece has always been an enigma, and, as played by Lawrence Redmond, that mystery is a sharp as ever, making his final compromise, "I'll stay...one more day" gives the whole show an air of frightening inevitability that has uncomfortable echos in today's political climate. 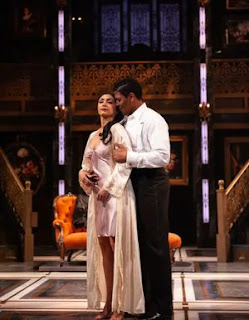 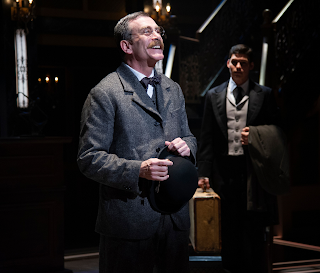 The central four characters really propel the action are in great hands. Nicki Elledge is a compelling, frustrating and sympathetic mix of worldly-wise and woefully naive as Flaemmchen, the near poverty typist with Hollywood dreams, and her chemistry with every man she deals with is palpable.  Meanwhile, the always reliable Natascia Diaz is alternately pathetic, warm and sensual as the past her prime ballerina. The last we see of her - face full of hope as she rushes to meet a lover that won't be there - is heartbreaking. With the suave, debonair moves of a young Denzel Washington, Nkruhma Gatling captivates as the Baron, carefully navigating the tricky role of a thief who wants to do the right thing - and his vocals are wonderful, especially "Love Can't Happen." The star of the evening, though, is the utterly charming Bobby Smith as the dying bookkeeper. He had us eating out of the frail palm of his hand from start to finish. The hopeful optimism he exudes filled my heart and brought tears to my eyes.

Unfortunately, you only have this week to check-in and check out this splendid Grand Hotel. The show closes Sunday, but if you can get to the D.C. area by then, I highly recommend this one!