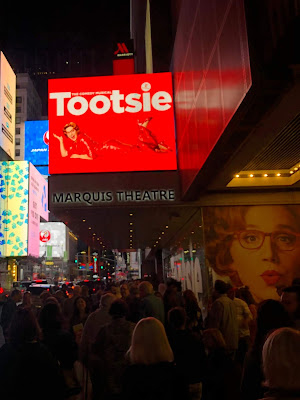 I've been excited about Tootsie since it was announced, and that excitement was amped up by the rapturous reviews. I mean, it features a score by one of my all-time favorite composer/lyricists today, it is based on a film I love, and stars one of my favorite working actors. Sometimes though, really looking forward to a show can backfire on you.

For me, Tootsie commits a pair of sins that are almost insurmountable: the book and score are not balanced, and the acting is all over the place - was the cast directed at the same time or separately then thrown together? Is it fair for the star to do all of the heavy lifting? And, honestly, it was boring for long stretches. It felt longer than it was. 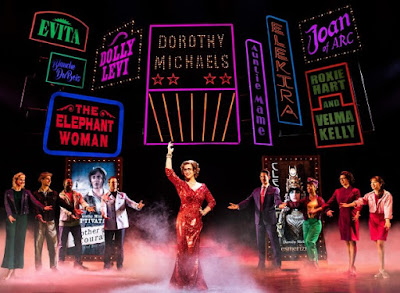 It is true that Robert Horn's book is funny. Equally true is that his book addresses the #MeToo of it all. But, the "funny" is intermittent at best, and it ranges from cringe-y sexism and vulgarity to actually hilarious. It is not the two and a half hour laugh riot some of the reviews would lead you to believe. And it tries too hard to be "woke" and timely - didactic platitudes are not necessarily a bad thing in and of themselves, but when they are pretty much the only way of making the point, it almost becomes pandering. On the other hand, David Yazbek's score features what must be the highest percentage of testicular references ever heard on the Broadway stage. I mean we get it - men are pigs no matter what in 2019. That point is made abundantly clear. "Generic" is not a term I throw around lightly, but this score is exactly that. It struck me more than once while watching this unfold that as they are happening, the songs fit and toe-tapping ensues. And then, I'd completely forget the tune. Writers of future shows take note: matter how many times a song is reprised, if the tune and the lyrics aren't catchy enough, we still aren't going to remember it.

The generic feel of the whole thing - an utter lack of emotional peaks and valleys - is further exacerbated by bland direction and laughably amateurish choreography. The guilty parties are Scott Ellis and Denis Jones, respectively. Ellis has enough experience to do more than center stage, full frontal delivery, and certainly knows some more creative scene changes than are on display here. (The apartment set goes up and down stage as often as Higgins' study does in My Fair Lady a few blocks uptown, and isn't nearly as impressive.) Meanwhile, although we are supposed to believe that the show-within-the-show is in need of an overhaul, the dancing is so bad it is laughable - as in laugh "at" not laugh "with." And I don't buy for when second that it is part of some grand satiric plan on the part of the creative team. It is simply not that clever. Worse yet, the "big" number is shoved back in our faces at the curtain call. Embarrassingly, at the performance I attended, the audience gave the number polite laughs and applause the first time around, and it wasn't much better the last time. Please understand, this isn't a knock to the ensemble at all. They can only do so much with what they are given; having seen most of these great triple threats in many other shows, I know they can do much more. 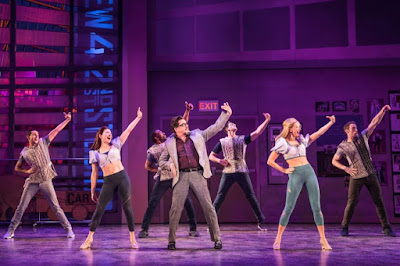 Of the technical elements, only lighting designer Donald Holder seems to have stepped up his game and he has delivered a bright, colorful musical comedy world. David Rockwell's settings are an odd mix of bright colored outlines and suggestive shapes and extremely detailed interior sets. Pick one and stick with it. Only when we see the show-within-the-show do we catch a glimpse of what might have been. Ditto William Ivey Long's costumes. Only when he's dressing that show and Dorothy Michaels throughout do we see real creative possibility. All three designers are among my favorites in their respective fields; even the great ones can phone it in on occasion, I suppose. 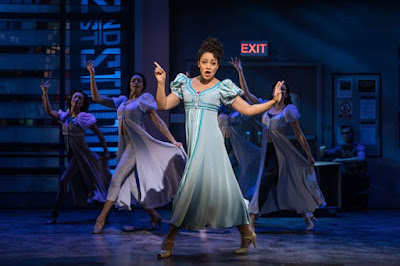 The principal cast is all good (some much better than good), but all are victims of weak direction and uneven treatment. Lilli Cooper has really gotten short shrift. Her part has been considerably pared down and an actress with her talents deserves better material. Speaking of which, when your role is written as a tired, trope-filled cliche, you have only a couple of choices: way overplay it for cheap laughs, or dig a little deeper and twist the familiar into something genuinely funny. On the overplaying side, we have Reg Rogers as the sexist, egomaniac director, and Sarah Stiles as the scorned wannabe girlfriend of the main character. Neither actor has met a piece of scenery they didn't love chewing on. Part of good comedy is knowing when to ease up, and not push for forced laughs. Trying to pull apart a dress unsuccessfully is funny the first two or three times, after that, no matter how much mugging and pausing you do, you just aren't that funny. 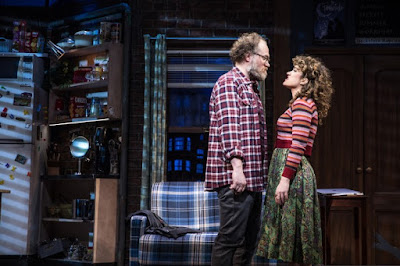 Thank Heaven for Julie Halston and Michael McGrath who have elevated their stereotype roles (rich theatrical producer and talent agent, respectively). Both have created characters you actually look forward to seeing again, and best of all, they trust their material and work with it to excellent effect. Then there is the dumb as a stone, sexy reality star, played by John Behlmann, who is a little bit of both. When he holds back, he's hilarious, when he over does it, he gets a chuckle. He's good, but the fit isn't natural feeling. The great find of the show has to be Andy Grotelueschen, who is wonderfully well-rounded as the best friend/truth bomb character, mastering a fine balance between physical comedy and gut-busting line readings. I can't wait to see what he does next. 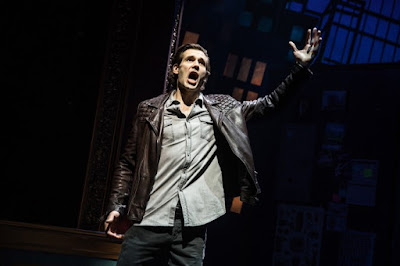 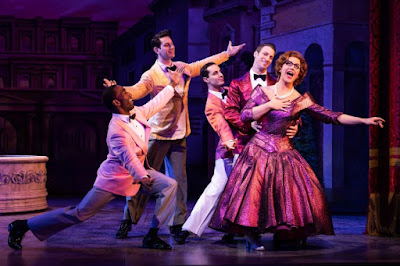 Nearly the entire reason this show works at all is because of Santino Fontana, who has the part of a lifetime here and knows it. Big and bold when he needs to be, quiet and subtle when that works best. This is no small accomplishment, considering how very unlikable his (male) character is. When he is Dorothy, the whole theater lights up (at one point, literally). His gifts are all-encompassing - song, dance, broad comedy, physical comedy, leading man and leading lady. He has earned his Tony nomination (and likely win).

You know, changing the setting to a Broadway musical (from a soap opera) seems a natural fit for the stage, and it works - until you realize that this big epiphany about women's rights and equality has played out for 1,000 people, not a national audience that a soap opera does. It gives Tootsie quite a bit less of a bite.

This season especially, I've been asked over and over how I grade a show as a "C" when I clearly don't like a show overall. Well, it's an average of many elements. In this case, the leading man/lady, a couple of supporting characters, and a few (very few) funny book scenes elevate an otherwise failure of a piece.