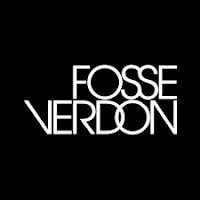 Sure, it was soapy, but the musical theater nerd and Bob Fosse fanatic in me loved every single minute of the miniseries Fosse/Verdon. And I am sad to see it go. I'll especially going to miss watching the marvel that is Michelle Williams, who better get an Emmy for her efforts. Hers a performance far beyond a mimicry of the beloved Tony winner, but rather a fully realized character. Also - it is time for her to return to Broadway, in a musical, please.

And so, here are a few thoughts on the last two episodes. 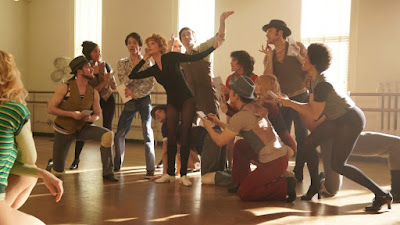 EPISODE 7: "Nowadays"
The episode every fan of Chicago has been waiting for! Interesting to watch (however compressed events were for dramatic effect) how Gwen got her way in finally getting the show on, and how Fosse punished her for "forcing" him to do it after years of badgering him about it. That cycle of satisfaction for one/pain for the other - a common theme in their relationship, apparently - is perfectly encapsulated, as he takes away dance steps in "We Both Reached For the Gun," (featuring a terrific Tyler Hanes as Jerry Orbach.  And later how he kicks her when she's down - hiring Liza Minnelli to replace her while she was out of the show. The wordless scene of Williams returning to her dressing room, tearing a note from Liza off her mirror and just staring at herself was beautifully understated. 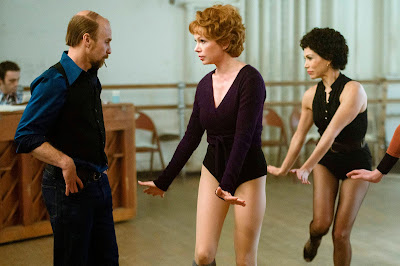 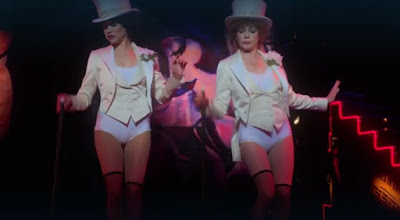 Best sequence of the episode: Kander, Ebb, Rivera (an exquisite Bianca Marroquin), Fosse and Verdon gathered around the piano in the 46th Street Theatre lobby, with Gwen singing a wonderful solo version of "Nowadays." After an argument, Fosse tells her it will be a duet, and she really lets him have it. You go, Gwen!

Also, I love, love, loved the recreation of the original Chicago sets by Tony Walton and Jules Fisher's lighting design. I never realized how much I missed color in that show! 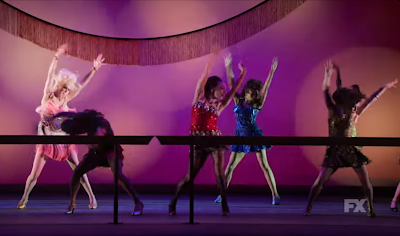 EPISODE 8: "Providence"
Just as it began, so did it end, with Sweet Charity. This time, it's the '86 revival/'87 national tour, but the roles are the same. Bob is a taskmaster perfectionist, and only Gwen can get it right. But before that, we saw the making of All That Jazz, hurtfully copying a cherished memory for his daughter, and humiliating his ex-lover. As the show guided us toward its inevitable conclusion, we see lives in turmoil and lots of unhappiness. Friends die, lovers leave and start families far away. And a daughter descends into the abyss of addiction, unchecked, it would seem, by either parent.

Best sequences of the final episode: When Nicole joins her dad in choreographing "Mr. Bojangles," and that same sequence played out with a young actress and Roy Scheider  (cameo by Lin-Manuel Miranda, of course...). Then there's the recreation  of the "Bye Bye Love" scene from All That Jazz, where Bob does a take at the urging of his cast. 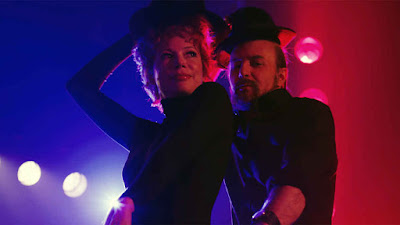 The final moment, when Bob dies in Gwen's arms is as poignant as it is touching. Michelle Williams and Sam Rockwell do wonderful work here. A great ending to a wonderful miniseries.