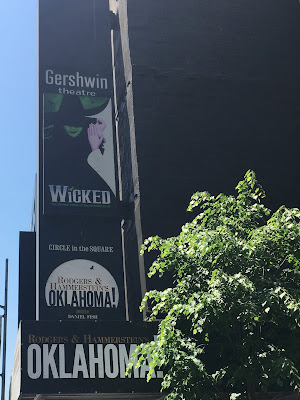 Somehow, seeing a milestone musical on a milestone of my theater-going career (my 300th Broadway show) seems entirely appropriate. That that production is a groundbreaking, highly unusual (for that show, anyway) mounting is even more appropriate. That's because Daniel Fish's stunning, often disturbing take on the Rodgers and Hammerstein's classic Oklahoma! is just the kind of show I love. All by itself, this work has been groundbreaking - the original is oft credited as being the first modern musical. But this very modern, highly sexualized and violent version - without changing a word of the original - resonates in a very modern, current way, while making it clear why its first audiences in the early 40's were taken aback. It isn't quaint and charming. Far from it. It is a scathing indictment of both the American West and our country's gun obsessed culture.


Everything about the physical production is designed to put the audience off kilter, from scenic designer Laura Jellinek's immersive set design, made almost entirely of bleached plywood (I'm a little surprised, and relieved, that we weren't made to sit on folding wooden chairs like the cast does). By eliminating nearly all scenery - there is a back wall with a muted prairie scene painted on it, and of course the other walls lined with the much-discussed full gun racks - we have no choice but to focus on the actors. Similarly, dressing the company mostly in modern clothing adds to the no-frills storytelling, while making these pioneers "everyAmericans." (Costumes designed by Terese Wadden.) The unorthodox lighting design - full theater lighting, full theater blackouts, full theater monotone lighting - by Scott Zielinsky, is simply ingenious, causing discomfort and creating a subliminal sense that everyone in the room - player and observer - is complicit in what happens. The lack of a full orchestra wasn't missed, either. Rather, the seven piece band, orchestrated by Daniel Kluger, is as much a part of the proceedings as the small company of actors. That is not to say it doesn't sound great. It does. Best of all, it fits the piece as presented perfectly.

The twelve member cast looks an feels like a microcosm of America, not a gorgeous, picture perfect creation of central casting. And each makes a solid, important contribution. The entire group is on stage for most of the show, providing as much commentary wordlessly as when they open their mouths. As the supporting townsfolk, Mallory Portnoy, Mitch Tebo and Will Mann are splendid and ultimately very sobering. And the "Dream Ballet" soloist, Gabrielle Hamilton is left breathless and sweating after leaving it all on the floor (choreography by John Heginbotham). I will admit that while I appreciated her efforts and recognize her skill, the dance itself left me a little cold. Too much of a good thing, I guess. It was the only moment in the nearly three hours that didn't feel genuine.

What a relief to know that an old classic show can be brought into the modern age without grandstanding or hitting us over the head with their less than sincere "wokeness." Indeed, without changing a word, but instead working on delivery and character interaction, this Oklahoma! is all about woman power and a frank look at what it means to be an American. Make no mistake, Mary Testa's snappy delivery and physicality shows us an Aunt Eller to be reckoned with. Surely, I was not the only one in the room holding my breath during the auction scene; it was so intense, I was afraid to move. Then there's the usually flirty Ado Annie, who is a woman aware and in charge of her sexuality. Ali Stroker 's version is still a ball of fire, and is plenty funny, but here, all of the choices are hers where men are concerned. She may be free to admit she "cain't say 'no'," but there is no doubt she will if necessary. And there's Rebecca Naomi Jones' sullen, focused Laurey, who is no wilting ingenue this time around. She's fully in charge of her life, and doesn't need a man to save her or make her whole.

The men are no shy violets, either, but in true man fashion, strut about the stage full of testosterone and thinking with their dicks. Will Brill offers some nice laughs as Ali Hakim, the traveling salesman who has met his match in Ado Annie. With zero trace of ethnic stereotyping (very refreshing) he's a guy used to using a different lady in every town, but now he's terrified.  James Davis is great fun and a pleasant warm fuzzy as the somewhat dim Will Parker. The two central males are a study in contrast - the country yodeling style of Curly gives off, at first, the gleaming cowboy stereotype, while the brooding hang dog manner of town outcast of Jud Fry seems to imply a one-note evil. But as each circles the other in a dance for dominance, and fits of dangerous male ego, it is easy to see that the confident cowboy and the porn-loving outcast have more in common than they don't. The success of this clash of the titans is due chiefly to the amazing chemistry between Damon Daunno (Curly) and Patrick Vaill (Jud). Plunged into complete darkness, we can only hear these rivals confront each other in the smokehouse. I'll be blunt: it may be the sexiest 10 minutes currently on the Broadway stage. There is no doubting the homoerotic bent of the scene. And it is second only to their final scene together for the most disturbing 10 minutes currently on the Broadway stage. Their second confrontation, in full light, is terrifying and graphic not only for its graphic violence, but for its shocking honesty. Both actors are brilliant.

The title number, sung twice, sums up this production perfectly. The first time, more traditionally, it is a rousing tribute to the American way. All smiles and in full voice, the company sells the number. "Sells" is the key word here - as if loud singing and big grins means happiness and pride. The second time, they sing it with as much gusto, nearly shouting it at us. There are no smiles, just shock and angry, hard boot stomping. It is a grim ending to a superb, game-changing revival. I left exhilarated and angry, joyous and disturbed. OK!