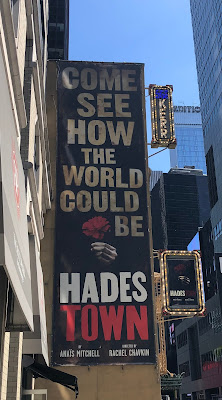 The more shows I see, the harder it is for a show to completely exhilarate me. Each season, I look forward to the next thrill ride, and many shows come close. Sure, there are shows that I love and admire, each perfect in their own way. But very few excite me and re-set the bar just a little higher. In fact, it's been a full decade since the last perfect storm of art, writing, staging and performance showed itself to me. That show was Next to Normal. Now, almost exactly ten years later, lightning has struck again. The show is Hadestown. And it is brilliant in every way.

Anaïs Mitchell's take on the ancient Greek myth of Orpheus and Eurydice is a heady, flamboyant one; her book and lyrics are at times poetic and otherworldly, and at other times pithy and shockingly present. Her score, a perfectly crazy mix of country, alt-rock and New Orleans jazz. (Her orchestrators, Michael Chorney and Todd Sickafoose have made sheer magic with a seven member orchestra/jazz band.) The combination defies convention and yet feels like a natural fit. The years Mitchell has spent refining, adding, subtracting and tweaking the piece have been worth it.

The entire design concept is just as unified, even though it would seem impossible. Michael Krass's costumes are a sexy mix of character-specific styles, spanning flapper dresses, 40's style menswear, depression era destitution and dystopian modern. The unit set - part French Quarter jazz club, part coffee bar aesthetic, with a multi-circle turntable and a dead center bottomless portal to Hell - has been stylishly designed by Rachel Hauck and holds some sweet surprises which I won't give away. This visual feast is made complete with the often eerie, often beautiful, and always stunning lighting design by Bradley King. Nevin Steinberg and Jessica Paz have provided equally eerie, beautiful and stunning sound design.

Though the story centers on two mythical couples, Hadestown is a true ensemble piece. Each of the thirteen cast members is integral to every aspect of this lean, tight piece. The five member Workers Chorus plays multiple roles, acts as scene changers and scenery, and contributes heavily to the show's themes. They (Afra Hines, Timothy Hughes, John Krause, Kimberly Marable and Ahmad Simmons) are also amazingly athletic and graceful dancers. In a world inhabited by gods and goddesses, and a story that hinges on twists of fate, it is only fitting that we are presented with The Fates (Jewelle Blackman, Yvette Gonzalez-Nacer, Kay Trinidad and Khalia Wilcoxon - an understudy, though who she was in for was not named), who observe, critique and manipulate with a scary yet enticing intensity.

As our guide Hermes, André de Shields offers up a suave, sophisticated smooth talker, carefully balanced with a gravity that has the focus of a laser beam. With the slightest glance, the merest trace of a grin, or a twitch of a gesture, he commands the stage in all the best ways. It is through him that we follow this twisting, turning tale of love, optimism, greed and faith. The ruler of Hell, Hades, and his seasonal wife, Persephone are the first of two central couples. Theirs is a complicated relationship, and they spin a juicy tale. I can't imagine a better duo to bring them to life than the positively wicked Patrick Page and the radiantly boozy Amber Gray. Page has made quite a living as Broadway's go to villain, but here he's completely original and oh so sinister. No resting on laurels or using the same old bag of tricks this time around. And please add me to the Amber Gray fan club list. My gods, she is mesmerizing. Together, these two perform two of the musical highlights of the entire theater season: he with the frightening (and all too present day) call and response number "Why We Build the Wall," and she with the act two opener, "Our Lady of the Underground."

The tragic couple at the center of it all is played with a delightful, youthful vitality by the fiery ball of energy that is Eva Noblezada and the angst-filled (and criminally underrated) Reeve Carney. True triple threats, they sing, act and dance with finesse, and they are the emotional center of the entire show. So good are they together, that even though I knew from the beginning how things would turn out, I was still shocked and saddened that they didn't somehow manage to avoid their fate. Not to worry - the final moments, including the rousing post-curtain call number - will leave you floating out of the theater on wings like Hermes.

Helmed by the über-talented Rachel Chavkin (she was also instrumental in the development of the work), Hadestown is so tightly constructed and the staging and choreography (by the equally brilliant David Neumann) so seamlessly blended it feels less like watching a musical and more like watching living, breathing art bloom right before your eyes. "Come see how the world could be," indeed. Timely and timeless, Hadestown is a masterpiece.