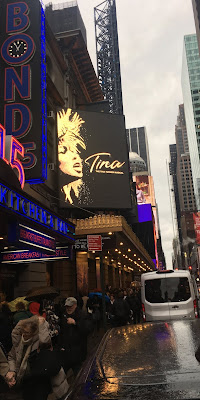 We are, frankly, tired of bio-musicals, having been bored by the overly sanitized Beautiful and frustrated by the slick but unsatisfying Jersey Boys. Others have littered our theater-going, with only On Your Feet! coming close to being both entertaining and dramatic enough to justify bio-musicals in the future. It isn't that we don't care for the catalogs of music that have gotten such treatment, or the lives of their subjects. But somehow, more often than not, these lives get the Wikipedia/Behind the Music treatment, which is to say, they simply aren't dramatic. Was Carole King's life really that easily solved and sunny? Other times, these vehicles are so over produced/directed that it feels like everyone involved is trying to put one over on us, like we won't notice if it is loud enough and never stops moving. Seriously, couldn't the fake Four Seasons sing one song all the way through?

Truth be told, the primary reason we went to see Tina: The Tina Turner Musical was because Mike and I have set a goal to see every musical that opens on Broadway this season. We went in fearing the worst - over-conceptualization or a squeaky clean version of Ms. Turner's notoriously troubled life. (And with only one Tina?) Well, what a wonderful surprise we got! Not only were our worries for naught, our faith in the sub-genre has been almost restored. Tina is the best of the bio-musicals, and is also a terrific musical.

Though I'm certain living the reality of parental rejection and spousal abuse was way more horrifying that it was portrayed on stage, it is to the show's credit that this isn't ignored or minimized. It was uncomfortable to watch as it was. Katori Hall's book (with an assist from Frank Ketelaar and Kees Prins) vividly depicts the familial cycle of abuse, emotional, physical and sexual. There is also plenty of coarse language, and disturbing racism. Harsh and occasionally shocking in its execution, the book provides the dramatic tension necessary for any musical to work. The score, made up of Turner's greatest hits and a few period songs, more often than not hits the mark and works in the story. Only one time did it really seem awkward and forced - "We Don't Need Another Hero" as a justification for cremation is, well... That said, the song itself, like all of the others, is beautifully arranged (by Nicholas Skilbeck, a skilled musician) and sung. No snippets here, each number is sung in its full version, thank goodness.

Visually, the show is nice to look at, shifting easily between concert settings, recording studios, and a variety of living spaces. The sets by Mark Thompson, the vivid projections by Jeff Sugg and the superb lighting by Bruno Poet allow for a seamless ebb and flow between performance and life, just as Ms. Turner's life did. Thompson's cavalcade of costumes help nab time and place. Choreographer Anthony van Laast recreates some great, notorious numbers from the Ike and Tina Turner Revue, and has staged some interesting numbers with the feel of music videos from MTV's heyday. But it is Phyllida Lloyd's fluid, easy direction that keeps things moving, equal parts reality, performance art and concept musical. Her work, while evident, doesn't get in the way of the action, and the storytelling never feels heavy-handed or insincere.

The large, multi-talented cast is full of quadruple threats. What dancers! It was exhausting just watching them. Watching the company go full out on "Proud Mary" not once, but twice, was a genuine thrill. Featured in supporting roles, Jessica Rush (as one of Ike and Tina's managers) and Charlie Frankin (as Tina's solo manager, Aussie Roger Davies) were standouts as defenders of our heroine. Mars Rucker positively glows as Alline, Tina's sister, and Mehret Marsh as young Anna-Mae, earns screams of approval with a voice five times as big as her diminutive stature. The piece is grounded by the warm and wise presence of the marvelous Myra Lucretia Taylor as Tina's beloved grandmother.

I gasped more than once at the performance of Dawnn Lewis, as the headstrong abuse survivor/neglectful mother who abandons a young Tina. She is unbelievably cruel, denying Tina the love and acceptance she craves, but has learned to thrive without. Ms. Lewis has real presence, which is perfect for a role where she must hold her own against the two strongest characters in the piece. One is Daniel J. Watts, who is explosive as Ike Turner. In lesser hands, this bastard could be a one-note blur of rage. But Watts wisely gives a volatile performance that grows in intensity, yet is even more dangerous in quieter moments.


If you find yourself at a performance where Nkeki Obi-Melekwe plays Tina Turner, do not despair. She is a brilliant performer, who, even from the mid-mezzanine, seemed larger than life. Wisely, she does not do an imitation of Turner - I mean, who really could? Rather, she does an "approximation" which works perfectly. But when she sings, WOW! I'm pretty sure the audience over at Tootsie can hear her. Seriously though, whether she is blasting through a powerhouse rendition of "River Deep - Mountain High," or quietly emoting through "Private Dancer" or "What's Love Got to Do with It," she owns the stage and our hearts. What talent.

Will bio-musicals ever be our favorite kind of show? Not likely. But from now on, we won't make too many preconceived judgments ahead of time. And, guess what? When it tours, we plan on seeing Tina again!