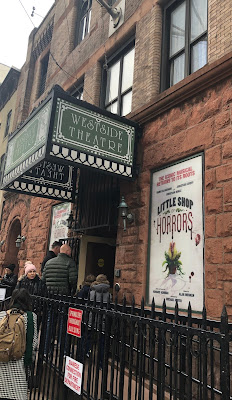 What a wonderful thing it is to see a thrilling production of a show you love! Such is the case with the practically perfect off-Broadway revival of Little Shop of Horrors. The show is such fun, made even more so by the cast and production that are completely on the same page, and they are all clearly having a ball. 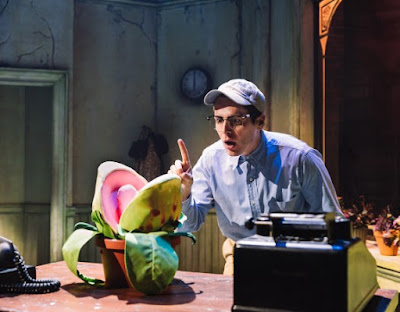 Visually, the show benefits from being small. There's an inherent quaintness about it. Never once did I think, "wow, imagine how much better this would be if they had more space and added more effects." Instead, the result is both retro and somehow sci-fi all at once. Julian Crouch's Skid Row is wonderfully detailed and feels larger than life, even as the growing plant makes it appear claustrophobic - exactly as it should be, while Bradley King's old school lighting heightens the mock pulp thriller vibe of the piece. All of the above is equally true of Tom Broeker's clever, but on point costuming. My only technical quibble, frankly my only quibble about the whole show, was with Jessica Paz's frequently too loud sound design, where the band over powers the singers in the bigger numbers. Frequently, I had trouble making out what the Urchins were singing, which is a problem considering the deep well of clever creativity in Howard Ashman's lyrics. Fortunately for me, I knew the lyrics well enough to fill in the blanks. 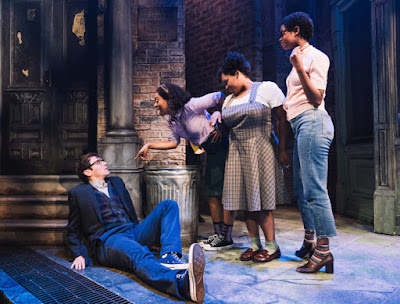 It would be very easy, after settling into a run, to run fast and loose with these characters, overplaying and mugging for the audience. Thankfully, that is not the case here. Every cast member is going full throttle, and obviously having the time of their life. The Urchins (Ari Groover, Salome Smith and Joy Woods) are a riot of sass, funk and soul, delivering their narrator/girl group role with panache. (Ms. Woods was a particular standout for me.) These ladies can SING! Meanwhile, Tom Alan Robbins as the down-on-his-luck, aptly named Mushnik, is a heady mix of old world warmth, almost cuddly, and shrewd, manipulative meany. Let's just say that when he meets his end, it is a good thing. Kingsley Leggs' vocalization of Audrey II equal parts big laughs and sinister creepiness. 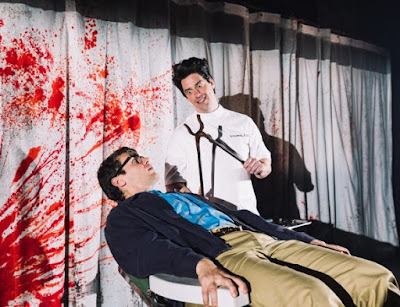 Anyone that had misgivings about casting "too cute" Jonathan Groff as Seymour, needs only to see his very first entrance to reconsider those misgivings. He is just amazing, with superb comic timing and, yes, a fully believable nerdiness. His voice is perfectly suited the score. Then there is the incomparable Christian Borle, whose gift for physical comedy and snap-of-your-fingers characterizations recalls the days of such comic genius as Sid Caesar,  Milton Berle and Tim Conway. The treat of his star turn is discovering what he'll be wearing, how he'll be revealed, and how in just one or two lines he will create a full character. But the best thing about his performance is that he never outstays his welcome or becomes self-indulgent. He also nails the pure evil of the maniacal dentist role with a harsh stream profanity and abuse hurled at the sweet Audrey. When he calls her "Slut!" it stung the whole audience.

Sometimes fate brings you wonderful surprises. I had one such surprise in the form of an understudy named Chelsea Turbin. Mark. My. Words. She will be famous. Soon. What a performance! Sweetly naive yet street smart, funny yet tragic, vulnerable yet tough as nails, her Audrey is sheer perfection and the heart of the show. Her voice is five times the size of her entire body, and she has that illusive, intangible "it" factor. Look for her to do big things.

EDIT: Now, the show is scheduled only through March 8th, and tickets are scarce. But if you can get there, or if they extend and you can go later, DO IT! Two of the best hours I've spent in a theater in 2019.