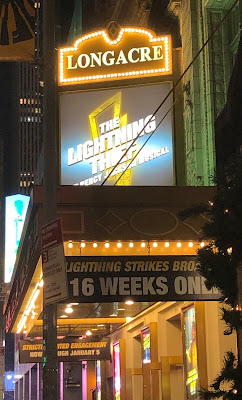 If the young man sitting behind me is any indication of success, then The Lightning Thief is a success of Hamilton proportions. I am, frankly, envious of his absolute joy and excitement. I remember when seeing a show gave me that feeling. Perhaps you can, too. You know, when what you have seen is just so great, you can't talk fast enough to get all of the happiness out? The boy was teary with joy, and couldn't wait for intermission to be over. For what it is - children's theater - indeed, The Lightning Thief is an achievement. As adult Broadway entertainment, not so much.

Mind you, I knew going in that it was aimed squarely at the kids sitting all around us. But, like it or not, Disney has set a nearly impossible bar for adult level children's theater. No, I'm not talking about the necessity of a zillion dollar budget and movie level special effects, which TLT certainly does not have. I mean that Disney shows are enjoyable on both a child's level and an adult level. So, as theater, sans the "children's" adjective, The Lightning Thief comes up short.

Oddly enough, though I think it would have been better streamlined down to its original one act size, I can't really say what I would cut - it didn't feel too padded. Joe Tracz' book is fast-paced, blink-and-you'll-miss-it full of story. It is clear and downright exciting most of the time, with smartly placed moments of serious emotion to let us catch our breath and feel something. But it lacks a certain maturity. The same can be said for Rob Rokicki's boisterous score, which as it is happening feels exactly right, both musically and lyrically, but none of it really sticks with you, either. Here is a case where I liked the music enough that I wish I could hum some of it.

I am a firm believer that a great show doesn't have to be lavish - if it is really a great show, it'll be great on a bare stage (Chicago is a perfect example). That said, if going "un-lavish" is the concept of your design, I think it important to incorporate that somehow into the direction (think the recent revival of Once On This Island where recycling was part of the pre-show and therefore made sense in later scenic and costume choices). That is not the case here. Though urban alley chic is consistently applied to all aspects of the aesthetic, Lee Savage's graffiti covered set of construction scaffolding and Sydney Maresca's trash as monsters costumes come off as cheap and low-budget. Somehow, the creative team just expects us to accept it as is, without even a visual cue or two as to why it looks like it does. Thankfully, both David Lander's lighting and Ryan Rummery's sound are more on par with a Broadway production, as both create mood and up the excitement.

I suppose with the same book writer and director, comparisons between The Lightning Thief and Be More Chill are inevitable. While BMC is aimed at a slightly older demographic, TLT is considerably better. Here, the book doesn't pander to the lowest common denominator with an unhealthy need to be cool; instead, it exects its young audience to pay attention and it never talks down to them. I really appreciate that. The same thing can be said for Stephen Brackett's direction. Here, he keeps a breathless pace, but his staging is far more creative and engaging. Yes, he paints with a too-broad brush sometimes, but he has chosen a theme and stuck with it. Perhaps his earlier show would still be running if he had done the same. A lot of staging credit also needs to go to choreographer Patrick McCollum and fight director Rod Kinter, who continually create movement that seems both epic and full of adventure - a great thing considering the story. They work miracles with just seven actors.

And what about those seven actors? They are a wonderful example of a "company." Considering that they have all been together so long, they make full benefit of the obvious bond and trust they share, but they also manage to make it feel like this is the first time they've ever done it (take note, Hamilton). That they play 47 different characters is staggering to think about. But a simple costume piece and a shift in posture sure can be stage magic, as they prove continually. That said, even small children know when they are being played, and Sarah Beth Pfeifer in particular would benefit from bringing all of characters down a few notches; what gets a laugh the first time won't always get a laugh the tenth time. The only one of the three main characters who plays multiple roles is Jorrell Javier, and when he's playing camp administrator "Mr. D," he is an excessive scenery chewer. He screams every line and toward the end does way to much mugging and posturing. He reminded me of the excess of George Salazar in Be More Chill, which I guess makes sense, as Salazar was in the first edition of TLT. That is not a good thing. Having said that, Mr. Javier is wonderful in his primary role as best friend and satyr, Grover.

Other standouts in the company are James Hayden Rodriguez, who creates a suave and confident character, which nicely balances with all of the surround in angst, and Jalynn Steele, who is so warm as Percy's mother, and a sultry riot as Charon, our hostess to Hades. The best of the ensemble for me was Ryan Knowles who played a wide variety of roles, male, female and mythical. His booming deep voice reminded me of a certain fellow way down in Hadestown. Perhaps Mr. Knowles could be seen for replacing that certain fellow?

There were two pleasant discoveries here as well. One was girl power incarnate, the fierce Kristin Stokes, who was the kind of performer you watch even when she's in the background just to see what she's up to. She's created a smart, brave young woman on par with Belle, Elsa and Hermione Granger, and that is a huge compliment. I look forward to seeing her in a production worthy of her talents soon. I feel the same for the powerhouse that is Chris McCarrell. He is Albus, Scorpious and Evan Hansen all rolled into one. He is a terrific mix of Broadway and rock star - think Dear Evan Hansen meets American Idiot. (I nominate him for a revival of the latter!) I suspect both Ms. Stokes and Mr. McCarrell have long careers ahead of them, and we are all the better for it. 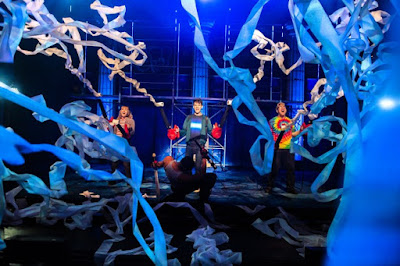 Despite its shortcomings, The Lightning Thief was enjoyable. And, hey, I can check "having toilet paper shot at me so I am wrapped like a mummy" off my bucket list. Subsequent patrons sitting in orchestra seat C109 beware!