The Art of James McMullan and the Logos of FRAVER

If you are reading this blog, I am going to assume that you have more than a passing interest in theatre and aren’t just looking for a photo of Jersey Boys or Times Square for some sort of report. I’ll also assume, then, that the two men I’ll be talking about today are both people with whom you are familiar. You may not know them by name, and even I, a huge fan of both, didn’t know what they looked like until I did a little research. But you definitely know their work. They are theatre poster designers Frank Verlizzo  (left) or FRAVER as he is known in design circles, and James McMullan (right), the man largely responsible for the art work used by Lincoln Center Theatre.

On a recent trip into the city, I was fortunate enough to have caught the last days of the FRAVER exhibit at the New York Public Library for the Performing Arts, Dorothy and Lewis Cullman Center and the middle of the McMullan exhibit at the same library, just one floor down at the Vincent Astor Gallery. This branch of the NYPL is located, fittingly enough, at Lincoln Center, in the back, near the new park/seating area and adjacent to the Vivian Beaumont/Mitzi E, Newhouse Theatres. The FRAVER exhibit is no longer showing, but the McMullan exhibit runs through June 11. It is open Monday – Saturday at noon, and closes at 8PM on Mondays and Thursdays, 6PM every other day; it is closed on Sundays.

Like FRAVER’s work itself, his exhibit was simple and straight forward: a small alcove of his show logos on objects, like a souvenir apron from the original production of Sweeney Todd, a few Playbills, and even his logo engraved on a silver flask for the show Looped. The main attraction, though, is his prolific theatre poster collection. With a 4 decade career, it would not be practical to have a sample of every show he designed, but there was a fairly large collection stretching all the way down the main hall and around the corner. Seen as a collection, I found it interesting to note the similarities – his signatures, if you will – like clean lines, sharply contrasting colors, vivid iconography and careful, deliberate use of type face to convey what a show was all about. And yet the individuality of each design is equally thrilling to behold. No two are alike. I have previously blogged about this artist’s works (including several examples), which you can find HERE. 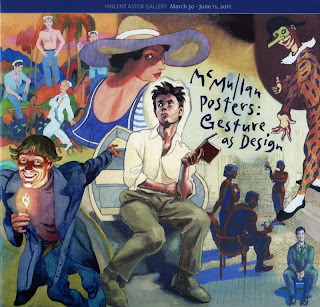 The McMullan Exhibit Brochure
The McMullan exhibit gets the star treatment downstairs at the Vincent Astor Gallery, where, like his theatre posters, each work represented, is shown just as any other artwork would be at the Met or MoMA. The exhibit is primarily of his theatre art for Lincoln Center, though one wall does exhibit some of his other art used for advertising outside of theatre. Some of his most famous works line the walls, in huge form: those giant subway posters that used to hang everywhere or as banners outside the Vivian Beaumont. Along side each is a small, individually drawn and painted original of the giant poster. The contrast is stunning, as you can see the actual pencil lines through the watercolors, not just a blown up version of the same.

In the center of the room are a series of glass display tables that show you the complete process for several of his works, from initial pencil sketches, to photographs of human models from which he draws his forms. Many also contain several drafts of each poster that lead you to the final product. From this you can really see the artist’s mind at work. Among the more interesting things I found was the genesis of one of my favorite McMullan works, The Glorious Ones and the use of the model to create his Ah! Wilderness!. I was also surprised, considering the resemblance of the figures to actual cast members, that much of his South Pacific poster is based on movie stills from the movie version of the show, not the recent revival. 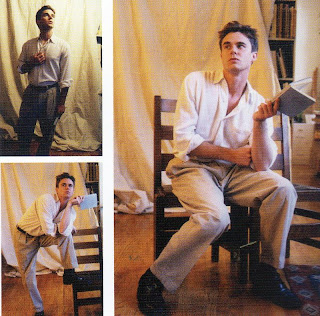 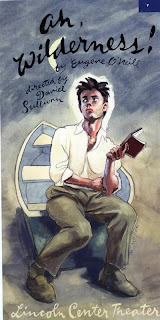 Step 2 (left): Sketch and experiment with color
Step 3 (right): The final image and poster
As a lover of theatre art, I thoroughly enjoyed both exhibits. While you still have the chance, maybe if you get to War Horse early, you can go in and see the McMullan exhibit. You can do the whole thing quickly or linger. There is even a short documentary film that runs on a loop if you are so interested. But it is a free exhibit and a worthwhile use of a half an hour or so during a trip into the city and to Lincoln Center itself.


Comments? Leave one here, email me at jkstheatrescene@yahoo.com or Tweet me!
Jeff
2.255
Posted by JK at 2:15 PM