Broadway on TV : The Pilot Season

If you follow TV at all - and I freely admit that I watch way too much of it - you know that now is the time that the networks announce cancellations and new series, which may picked up after their pilot episodes have been filmed, critiqued, polled, focus grouped, etc.  (Kinda like Spider-Man 2.0!).  "Out with the old and in with the new," they always say. 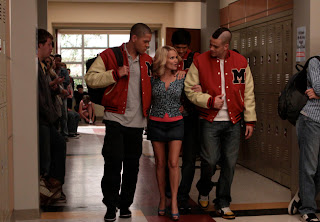 Kristin Chenoweth: From Glee to Good Christian Belles
This year, a lot of Broadway favorites have joined the TV ranks, which is bittersweet.  I mean, sure, if the ratings are good, we'll get to see the likes of Cherry Jones and Kristin Chenoweth every week.  On the other hand, that also means we probably won't be seeing them on Broadway any time soon, either.  Naturally, I wish them all every success, but hope that they don't forget us theatre fans and come back to the stage soon. 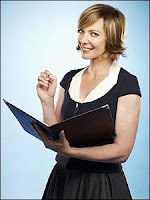 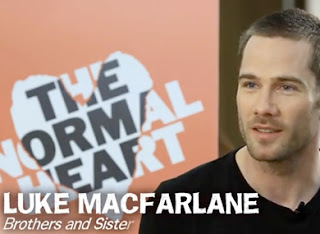 Janney and MacFarlane: Gone from the TV screen, back to Broadway?
I was, first of all, saddened by the announcement of the cancellation of a few ABC series which have Broadway ties: Off the Map, sort of Grey's Anatomy meets Tarzan got cancelled.  It featured one of my favorite young actresses, Mamie Gummer.  Then there is the comedy Mr. Sunshine, whose co-star, Alison Janney (9 to 5: The Musical) was the biggest reason to watch that show.  But I am heartbroken about Brothers and Sisters.  With that show gone, however, maybe Calista Flockhart (The Glass Menagerie), Sally Field (The Goat, or Who is Sylvia?) and Luke MacFarlane (The Normal Heart) will return/stay on Broadway.

Still, there are a lot of Broadway babies to be excited for (and I'm sure I'll miss a few): 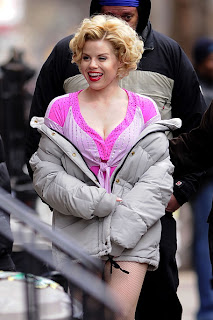 Megan Hilty on the set of
the pilot for Smash
Of course, most Broadway eyes will be on Smash for several reasons.  One, it is about the birth of a new Broadway musical.  Two, if it is made into a series - more likely now that the pilot has been chosen - it will likely be filmed in New York, which means day jobs for Broadway actors.  These are at a premium with soaps dying off or moving, Law and Order winding down and no more Sex and the City.  And three, not only will it star some of Broadway's brightest, but its pedigree and production staff is all Broadway: Steven Spielberg (Catch Me If You Can) produces, Michael Mayer (American Idiot) directed the pilot, and March Shaiman and Scott Wittman (Hairspray, Catch Me If You Can) are penning the original musical score for the show.

I guess TV this year will be a win-win for everyone!  I hope all of these shows make it and run for years.  Just don't forget the stage, OK stars?

Labels: Broadway on TV, Catch Me If You Can, Kristin Chenoweth, Megan Hilty, The Normal Heart