To fully understand and appreciate some of the choices that were made in creating the logo for War Horse, one must take a look at where the production started: The National Theatre of Great Britain.  War Horse, like The History Boys before it (as well as all of their productions), is a part of a branding style for that venerable theatre company.  By having all of their logos consist of thought-provoking, story-telling photographs and brightly colored, plain (if bold) typeface telling us the title of the production.  The idea is that one can look at any of their theatre logos and instantly recognize a "National Theatre of Great Britain" production. 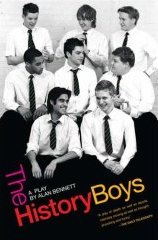 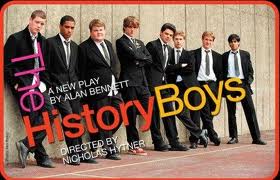 You can see that style here in the artwork - the same on both the West End and Broadway - for The History Boys.  Notice that the photos immediately tell us part of the story: these are boys that attend the same class in school (the "class photo" version) and that these boys are friends beyond school (the "line up" version).  Both photos work at a glance, since you can tell that from just looking at the images.  But closer inspection reveals much more as each boy in each photo reveals much about his personal character trough facial expression, posture and the like.  Relationships are even inferred in the way they arranged. 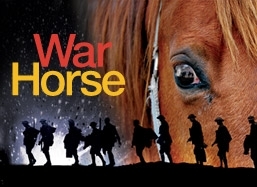 That kind of broad, instant recognition - crucial for any successful logo - is also very apparent in the art work for War Horse.  Instantly recognizable is the lose-up of the horse's eye and nose, his chestnut/reddish color so warm, majestic and beautiful like the animal itself.  The across the bottom we see a rough, rugged terrain populated by soldiers on a march in silhouette.  A quick glance tells us they are soldiers, with guns in hand all marching in the same direction - toward an explosion of epic proportions.  War: check.  Horse: check. 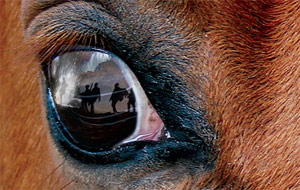 But a closer look reveals much more about this compelling story of man and beast at war.  The horse's eye reflects the same line of soldiers.  Clearly, the animal follows their movement, and is in his thoughts.  Why are these men walking away from the horse?  Is the horse with them?  (An earlier version of the logo depicts just that.)  And then notice the particulars of the men.  Even in silhouette, you can't help but notice the fatigue in their posture, many with heads down, exhausted, despairing.  Notice, too, that they are not in formation, but rather walking in pairs or in solitude.  These man, it is apparent have survived, but the magnitude of what they have been through clearly weighs heavily on them.  (Not to put too fine a point on it, one can tell from the shapes that these are soldiers from the first World War.)

With its bold red-orange "WAR" and more earthy, but cautionary yellow "HORSE" we can tell it is a NTGB production.  But the choice of color and placement of the title suggests just how significant the story of this animal must be; how majestic and powerful.

Finally, I think it very telling, in a terrific way, that the poster reminds us that very real people and animals were a part of this "war to end all wars."  Once you attend the show, and are swept away in its thrilling theatricality, it is vital to remember that real men, not actors, and real horses, not magnificent puppets courageously lost their lives fighting in one of mankind's worst follies.