Today begins my annual look at the commercials deployed by the producers of this year's Tony Award nominated shows.  It strikes me as a sign of the times that for the first time, I've actually seen these commercials, even though I don't live in New York.  Why?  Because they are now featured in all media - pop-up ads at theatre related sites, show websites themselves, and even YouTube "Channels" dedicated to the shows.  Yes, the world continues to get smaller, and in this case much more inclusive.  Long gone are the days when you had to be in New York City to see an ad for a show.

Here is a look at two of the four Best Musical nominees. 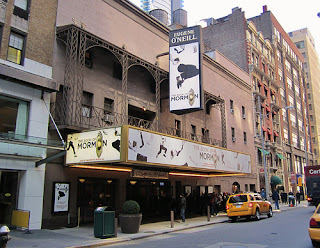 You know, I have found the entire PR machine around this gigantic hit show to be so fascinating.  The producers are savvy enough to know that a sold out hit doesn't require advertising frequently, but enough to keep it in the public consciousness.  And yet, the whole thing feels (in an entirely terrific way) like a new kid has come to town, and not knowing the rules, is making up new ones.  It is not unlike the show and its creators themselves.  They are breaking all of the rules... free listening to the cast recording on NPR... a free performance for those hundreds of loyal kids who assemble every night for a lotto that has cheap seats to accommodate 20-25 people... sure, they can afford, right now, to give away the farm, but the long-term good will this engenders should be vast.  And it should be game-changing.  Like the advent of seat lotteries and student rush tickets ushered in by the last blockbuster new kid, RENT, the show has, hopefully, started some new trends toward bringing Broadway entertainment to the masses.

And their ads - which fit TV, websites, etc. - are as simple and to the point as Mormons themselves.  Instead of big splashy production values and one long commercial, the group has created a series of 5 ads that give us rapid fire narration of significant quotes from critics, while trumpeting 14 Tony Nominations, including Best Musical.  Why these 16 second bits work is threefold.  One, they are short enough to keep the "I hate pop up ads/I hate commercials" crowd interested and tuned in.  Two, because they are narrated word for word from the words on the screen, they work whether or not you have in your ear buds or the sound is up on your iPad or other device.  And three, they are organized into types, so where they are placed can have the most impact.

There are 5 of them, but I'll focus on three:

1.  This ad is for the traditional Broadway attendee, who lives, breathes and worships at the altar of The New York Times.  It hits the old-fashioned button while still being hip, brings in mom and dad, who always talk about how great Broadway used to be, and of course is almost reverent about the source it comes from.  Very smart - reach beyond the initial South Park loving crowd.  There are way more of them.

2.  Speaking of that target audience, this second clip is directed toward them, for sure.  Who is quoted?  The kings of subversive late night, Jon Stewart, Jimmy Fallon and David Letterman.  Not a Leno in sight.  These are the shows the target audience watch, and if these guys (all men, mind you) can crack wise about a MUSICAL and still love it, maybe its time to get with it and see what this Broadway business is all about.

3.  This one, I think is for the more traditional theatre goer who is looking for something new.  He or she has probably heard of the show, knows its bad boy reputation, and has probably dismissed it.  But since it got all of those Tony nominations, maybe it is worth a second look.  So why not give these folks a series of quotes from a wide spectrum of reputable publications to mull over.  After all, Rolling Stone, Vogue AND The London Daily Mail can't ALL be wrong, can they?

It may not be glitzy, glamorous, or even all that "Broadway," but it works so well!  Grade: A 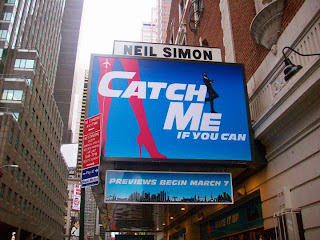 This show is really cashing in on the sexy glamour of the 60's, focusing on the gorgeous, leggy gals of the ensemble and the youthful sex appeal of star Aaron Tveit.  Played like a cross between a Fosse musical and an old airline commercial, this spot has its cake and eats it, too.  It shows us a good glimpse of one of the main segments of the show, it shows us dancing, pretty girls and a hot leading man.  If you know the film, you understand the nod to Leonardo DeCaprio walking down the jetway with a pair of stewardesses in tow.  If you don't know the film, it is still  everything Broadway should be to the average viewer: song and dance, and romantic characters doing exciting things.  Hot stuff, indeed!  Grade: A-

Here is the "Making of" video:

And here is the finished product.  Makes me want to see it again!