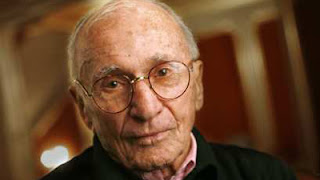 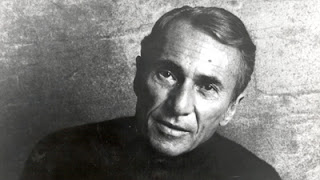 I think I've read close to 50 tributes and remembrances of Arthur Laurents, who passed away Thursday at the age of 93.  And just about every one of them used at least two of the words above to describe the man who left behind a legacy of truly historic proportions.  Some of the greatest people in modern American musical theatre, themselves worthy of reverence, speak of this man with a humble gratitude unlike anything I've heard before.  All of them talk about the man's love for theatre and his desire only to improve the art form.  And all of them talk of a man whose honesty was brutal, uncompromising, and down right cruel.  But underneath it all, the respect comes shining through for a man who was generous with his gifts, and simply expected everyone around him to come up to his level.  Nearly everyone talks of being terrified by him, then basking in the glow of his love for all things theatrical.  They speak of the tyrant, the teacher unable to be pleased and task master.  And then they speak of giving some of the best performances of their careers because of him.  One can only dream of being spoken of like this at his own passing. 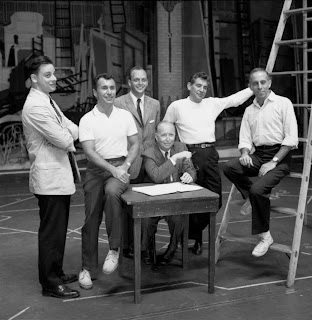 The entire creative team of West Side Story
(Arthur Laurents is second from left)
The Great White Way is littered with the egos thrashed down by his pointed criticism and blatant disregard for anyone he felt didn't give the work the attention it deserved.  Just ask the original cast of the most recent revival of West Side Story.  Very public print and Internet interviews had him naming names and feeling cheated that all of his work on that production was not being upheld by a cast full of lazy, cynical and talentless hacks.  Apparently, the leads and subsequent replacements met with his approval.  But in the balance, we were rewarded with a gutsy, raw, tense piece of theatre, not a dusty throwback of a revival; West Side Story in 2009 was not resting on its historic laurels, it was alive in ways that the original couldn't approach. 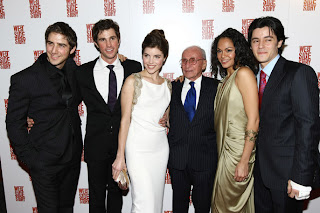 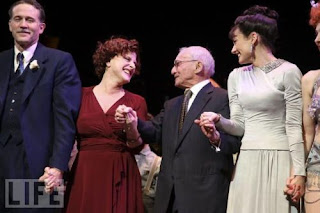 (Top) Laurents, center, at the opening
night of West Side Story
(Bottom) Laurents, center, with his 3 Tony-winning stars
at the opening night of Gypsy
Then there was his declaration that Patti LuPone was the ultimate Rose in Gypsy.  Sure, theatre fans may agree or disagree - Tyne, Angela and Ethel all have their fans (he apparently wouldn't even discuss the Bernadette revival) - but considering that the man wrote the book and directed several productions, he of all people should know who came closest to what the author intended.  His final revival of that gem earned each of its three leads hard earned and well-deserved Tony Awards.

But just look at these last two paragraphs.  Imagine having a career that includes two of the most important musicals ever written.  One addressing issues and asking difficult questions in an era when musicals where loud, colorful laugh fests, the other widely considered by all in the field to have the perfect book of a musical, fat free and brilliantly laid out.  Can you imagine having just West Side Story or just Gypsy to your credit?  How truly blessed we as theatre-goers have been to have witnessed these two classics re-conceived and given their final stamp of approval by their own author all with in the space of 3 years or less. 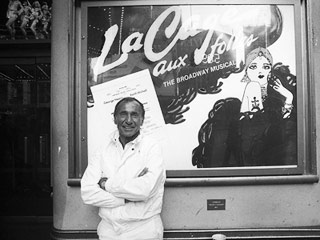 Of course, he is best known for those landmark shows, but he also directed arguably the most critically popular musical of the late 20th century, and the only one to have won the Tony for Best Musical or Revival three times.  I am speaking, of course, of La Cage aux Folles, a show that was revolutionary in the early 80's, just as AIDS was getting started and gay rights were just a long off dream.  The revivals of his show he had little kind to say about, but it is safe to say that neither revival could have happened without his original, indelible contribution.

Even his stage flops are notorious: Anyone Can Whistle, for which he wrote the book, lasted a mere 9 performances, and remains beloved by musical theatre aficionados the world over; the show that won the Tony for Best Musical, but was already long closed after a very short run, Hallelujah, Baby! was his work, and until recently, his directorial flop Nick and Nora was the longest previewed musical of all time.  It's cast recording only hints at that show's potential brilliance, and even in its "floppiest" moments, his signature wit and intelligence comes through in the individual performances of such stars as Joanna Gleason, Faith Prince, Christine Baranski, and Barry Bostwick, to name just a few. 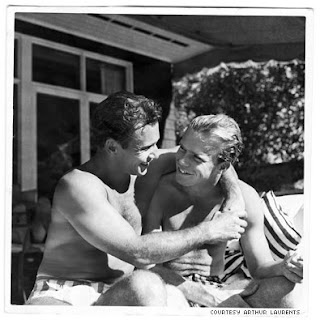 1956: Arthur Laurents and his partner, Tom Hatcher
Then there was his film career, including such classics as Rope and The Way They Were among several others.  He also wrote an autobiography that detailed his love for theatre, his hatred for many a theatre person, and his personal life.  Even in that regard, the man was so far ahead of his time.  As a gay man living as openly as one could during some of this country's most dangerous times, Arthur Laurents was a role model of discretion and living they way he wanted to despite public opinion and cruelty against homosexuals everywhere.

The lights of Broadway were dimmed in his honor on Friday evening, a time honored tradition out of respect for theatre legends.  I wonder if he'd be embarrassed or proud of the honor.  I'm guessing probably a little of both.  He knew he had a gift, and he shared it with generations past and his legacy will live on in the future.  He was proud of his work, even when he could be his own harshest critic.    After all, he only gave 100% one hundred percent of the time, and expected just as much in return.  But I think he might blush a little at the fuss, and then smile.  Even the greatest among us enjoy credit where credit is due.

Thank you, Mr. Laurents, for everything.