Apparently, when you stop a show in mid-previews, re-work it for a few weeks and then re-boot the show, the motto is "With great overhaul comes great a volume of promotion."  Such would be the case with the Great Broadway Experiment it seems, though to be fair, we are really going into uncharted territory here.  Sure, The Scarlet Pimpernel ended up with three versions on Broadway, but the show didn't close between 1.0 and 2.0 and the changes weren't as vast as those reported to have been done to Spider-Man: Turn Off the Dark.  Even Pimpernel 3.0, which came back to Broadway after a brief tour, with a new director and cast, wasn't that substantially different.  (Please, Theatre Gods, don't let the Wildhorn camp get any ideas and do Wonderland 2.0!)

So far, at least, the media outlets have been pretty good about all of this, actually giving this version the treatment a new musical would get and not more.  There is an excellent (and honestly fair and balanced) article (CLICK HERE) about the changes in creative staff and in the show in The New York Times.  The Julie Taymor/SMTOTD 1.0 business is reported factually and bias-free, and they have gone out of their way to let us hear from the new director and original cast members.  And though they are careful not report the changes as facts, since no one has yet seen the new version, I have to say all of the changes they describe sound, on paper, like they really have tried to move things in the right direction.  Re-writing the script, refocusing on different aspects of the characters, adding more flying and adding songs and re-tooling others are all things that should improve the show.  I love more Peter Parker-Mary Jane Watson!  Give me more Uncle Ben and Aunt Mae!  And Patrick Page as the Green Goblin?  Please, Sir.  I want much more!  And I am also glad they didn't do away with Arachne, and are using her for a sensible symbol - a guardian angel - for two reasons.  One, T.V. Carpio is a serious talent not to be wasted, and two, it means that there will still be some of Taymor's work in there, and the new version won't become a total theme-park show.  Don't turn off all the dark, you know?

Just looking at the song titles, and assuming they are in show order, you can see things have been added, dropped and moved around (song list from Playbill; bold represents new title):  "The Myth of Arachne," "Behold and Wonder," "Bullying by Numbers," "No More," "D.I.Y. World," "Bouncing Off the Walls," "Rise Above," "Pull the Trigger," "Picture This," "A Freak Like Me," "If the World Should End," "Sinistereo," "Spider-Man!," "Turn Off the Dark," "I Just Can't Walk Away," "Think Again," "The Boy Falls From the Sky," "I'll Take Manhattan" and "Finale – A New Dawn." 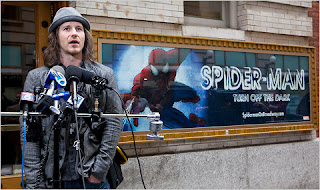 Tierney addresses the press on the day
of his return to work at the Foxwoods Theatre.
And isn't it nice that the return of Christopher Tierney, while not quite the same YouTube sensation, has gotten almost as much press as his fall?  If you want to talk hero, here you go, Broadway.  Bravery, good moral fortitude and an unwavering commitment would make Spidey, Superman and the League of Justice proud.  OH!  And since apparently the cast was given the opportunity to jump ship free and clear, thank you, Reeve, Jennifer, T.V., Patrick, et al for staying!  Even if this turns out to be an epic failure, you are a part of the great history of Broadway.  And if it turns out to be great, thanks in advance for sticking with it, while having the grace to be humble about the whole experience.

On the other hand, the advertising leaves me scratching my head and feeling a tinge manipulated.  For all of the criticism the producers got for "duping the public," blah blah blah, it doesn't help that they are having their cake and eating it, too.  Almost everything I've seen in print or through advertising in general pushed the revamped, re imagined theme, but then quotes the critics.  Hmmm.  Personally, I don't blame them.  If Jerusalem and Billy Elliot can advertise with quotes from their London incarnations, and The Book of Mormon can quote from critics who attended a backers' audition, then why not?  Still, doesn't it make it seem like it has already opened?  (Please note sarcastic tone...) And seriously, without sarcasm, isn't it kind of crappy to completely ignore the past and say "Previews Begin May 12?"  Um... 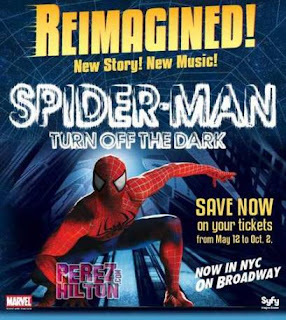 And the new commercial, too, seems to be having it both ways.  Granted, there has not been time to re-film things, so they have to rely on 1.0 footage.  But is the inclusion of that hideous army dance an indication that it is still there?  And what about Swiss Miss and Carnage? Is the fashion show still on?  My hope is that the former will be utilized as a better, clearer story device (and we already know it is re-choreographed) and that the latter is simply because those costumes cost so much freakin' money they HAD to be used.  Maybe a montage sequence of Spider-Man vanquishing a bunch of evil before he gets a crack at the Green Goblin once and for all?  A closer look at the song list above does imply that the "army dance" and the Sinister Six are still in, as those songs are still listed.  Of course, the songs may have been reassigned or re-done.  I'm going to assume that much of the overhauling is with the book.  As it stands, the new ad has a voice-over telling us it is all new, but the pictures say "same old, same old."

On the plus side, though many are reading this as desperation, there are a lot of discounts out there to entice theatregoers.  And as a two time attendee of 1.0, I really appreciate that they extended us a special discount for having already invested in the original version.  Nice, smart and just plain decent.  I think discounts during the preview period are a great, grand gesture, too, for all the crap they took for full-price tickets during the previews of 1.0. (I've stated before what I think of that criticism and will leave it at that.)  At this point, if you buy a ticket at full price, no matter how much you follow theatre or not, you are doing so with knowledge.  These discounts are EVERYWHERE.  Handbills in Times Square, SEVERAL Email blasts, and the fact that they exist has been mentioned all over the newspapers.  OK, so an Eskimo on leave from Alaska might not know...

And so, today it re-begins.  The inevitable bitch session threads on Broadway World and All That Chat, where about 10% of what is posted will be by people who actually saw the show tonight.  The other 90% conjecture and outright lies.  (I wouldn't believe any posting that is from an anonymous cat or crew member, or anyone who overheard something at the stage door or who is a "friend of a cast member."  Do you really think that after all of this they will be chatting up the public at large?)  Try as I might, I know I'll read it all in spite of my honest hatred of it.  But mostly, I am really looking forward to seeing what they have done to the new season's first new musical.

I remain optimistic and almost obsessed about how all of this will turn out.  I can't wait to see this new version after June 14 - the show better open on that date!  On the other hand, when it does open, it'll finally put to rest years of speculation, national attention and no fewer than two story lines on TV series.  Even the great Rodgers and Hammerstein didn't get this much attention!  Whatever will I do?  Well, if it is good, probably see it a few more times.  If it is bad, I'll move on like everyone else.

Break a Leg, Spider-Man company!  (And please!  Nothing else!)

Comments?  Leave one here, email me at jkstheatrescene@yahoo.com or Tweet me!
Jeff
2.256
Posted by JK at 2:42 AM