Coming Attractions: Broadway at the Movies

PLEASE TAKE A MOMENT TO TAKE THE MONTHLY POLL
AND TO VOTE IN ROUND SIX OF "HOT/HOTTER"
AND ENTER TO WIN TICKETS FOR NICE WORK IF YOU CAN GET IT
ALL THREE ARE TO YOUR LEFT!  CLICK THE ICONS! 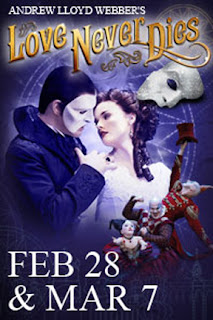 There were two distinct crowds of people at the showing of Love Never Dies that I attended last night. People who are Phantom of the Opera fans and complete Broadway fans.  Yes, there is an overlap, but it became apparent that there was a distinction once the "Coming Attractions" started.

They started with a 2 minute bit about Sister Act, featuring Whoopi Golberg extolling the 100% family fun of "every single scene!"  (I take exception to that - a point blank shooting murder doesn't qualify as "100% family fun," and I'm pretty liberal.  But I digress.)  Complete Broadway fans' reaction: "Did you hear that that Cosby girl is going to be the lead in that show?"  Phantom only fans: "How does Whoopi do that show AND The View?"

Then there was the commercial for Ghost: The Musical... Complete Broadway fans: "Another movie as a musical.  Isn't she the girl on the poster for Hair? No!  She's the one who sang "Easy to Be Hard" (singing that ditty followed, while the woman two seats over from me did the following when Richard Fleeshman is stripped of his tank top) "Oh My God, he is HOT!  I am wet!  How do I get tickets?"  I kid you not.  She was LOUD.  Note to producers of these ads: Tell us where to buy tickets!

Then there was the 10 second blip of Jesus Christ Superstar that garnered this from Phantom only fans: "I forgot HE wrote that, too." Complete Broadway fans: "Didn't they just revive that?"  "No.  This is not the same show we have on DVD.  This is the Canadian production."  "Really?  Is Jesus different in Canada?"  (Hearty laughter.)

Second to last was the 16 seconds of Evita: Phantom only fans:  "Without Patti LuPone, that is going to suck!"  "Oh, who cares?  Phantom is the only decent show HE wrote."  Complete Broadway fans (sitting right behind me): LOUD LAUGHTER  (Watch the commercial and see if you can figure out why!)

Finally, the ad for the DVD of the 25th Anniversary Phantom of the Opera at the Royal Albert Hall came on.  Complete Broadway fans: "Thank God!  Maybe after this the show will start..." "I am so over Phantom..." "Then why are you here?  Because I'd rather sit through this for $20 here than shell out $150 on Broadway."  Phantom fans: (General applause, sighs and pointing at the screen) "Now THAT's what I'm talking about!"  "I ordered my DVD the other day... AND I saw it on PBS the other day!"

The lights went down and the show started... 10 minutes of Lord Webber gushing about how amazing he is... never a good sign... come back tomorrow for my review of Love Never Dies...