PLEASE TAKE A MOMENT TO TAKE THE MONTHLY POLL,
VOTE IN ROUND 8 OF HOT/HOTTER
AND ENTER TO WIN TICKETS FOR LEAP OF FAITH
ALL THREE ARE TO YOUR LEFT!  CLICK THE ICONS!


OK, so I'm later than usual with my season theatre wish list.  By now, I've usually blogged all about what I can't wait to see between March and May.  Not that I need an excuse, but part of the reason I'm late with this edition is because I've been seeing so much theatre already in March!  And I don't see much of a slow down between now and the end of April.  And May will be full of making up the shows I've missed and Tony talk (not to mention the 3rd Annual Awards That Tony Forgot!).

For those of you who follow this quarterly series, I took a look back at winter HERE. 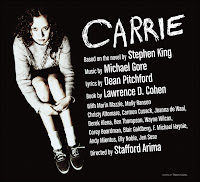 CARRIE (Saw on March 3)
I have been looking forward to this show since they announced the workshop-reading a couple of seasons ago.  I even bought a subscription to MCC Theater to assure that I'd get decent tickets.  Usually, when I build up something in my mind as much as this, I am disappointed.  Not this time!  I found it poignant, chilling and exciting.  Read my review HERE.  Plus!  An interview with Carrie star Derek Klena!  Part 1 HERE.  Part 2 HERE.

ONCE (Saw on March 17)
I know nothing of the film on which this show is based, and I am mostly interested because of the buzz surrounding the recent off-Broadway "try out."  I am, though, looking forward to seeing both Steve Kazee and Cristin Milioti, as I have heard so much about their "star quality."  (Review will post on Tuesday, March 20) 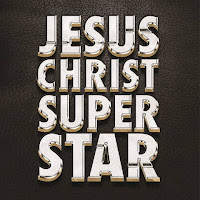 JESUS CHRIST SUPERSTAR (Saw on March 17)
This show and I have a long history - I've done it twice!  And its score is one of my favorites.  I'm excited to see if all the hoopla surrounding this particular production is on target or just so much hype.  It'll be nice to see Tom Hewitt in a new show again, too. (Review will post on Friday, March 23)

INTO THE WOODS - Baltimore's Centerstage (Saw on March 9)
How cool to see another regional theater!  And one of my favorite shows!  Plus, after seeing the original production 6 times, it'll be cool to see the original Little Red Ridinghood, Danielle Ferland, as the Baker's Wife.  And the cast includes three more of my favorite actors, Jeffrey Denham, Nikka Graff Lanzarone and Lauren Kennedy.  (Review will post sometime during the week of March 26)

NEXT TO NORMAL -Boston's SpeakEasy Theatre Company (March 24)
Another regional theatre to check of my list!  And with one of my all-time favorite shows!  I am very excited to see my first production of the show that isn't the Broadway or tour version.  It will be interesting seeing it through someone else's vision of the piece.  (Review will post March 27) 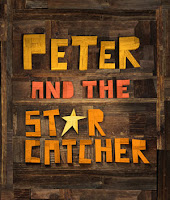 PETER AND THE STAR CATCHER (April 14)
Peter Pan has always been one of my favorite stories, in every possible permutation.  So I am really looking forward to this show.  But the theatre lover in me also can't resist the sheer theatricality of the presentation.  And the leads thrill me every time I see them: Adam Chanler-Berat, Celia Keen-Bolger and Christian Borle.  This may just be the show I am most looking forward to! 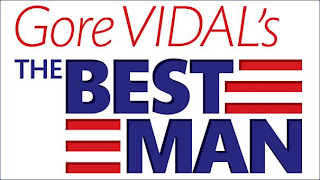 GORE VIDAL'S THE BEST MAN (April 21)
Two words: Angela. Lansbury.  Plus my first time seeing James Earl Jones.  And the rest of the cast... wow!  I almost don't care about the play itself!

LEAP OF FAITH (April 7)
My concern is that I'm seeing a very early preview.  But I still can't wait to see the awesomeness that is Jessica Phillips again!  She was great in Priscilla, but she was a revelation in next to normal.  And now she's a leading lady all on her own!  And there's the always interesting Raul Esparza... 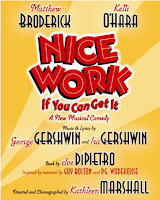 NICE WORK IF YOU CAN GET IT (April 7)
Every year there is one show I have almost no interest in.  This year it is this show for me.  On paper, it looks like a great thing: a Gershwin score, a top-notch cast, and what sounds like an eye-popping extravaganza.  Matthew Broderick, Kelli O'Hara, Judy Kaye, Estelle Parsons... who could ask for more, really?  Still, I'm underwhelmed by their ads and Gershwin keeps popping up... we'll see!

GHOST: THE MUSICAL (April 14)
Loved the movie.  Love the two sexy stars - Caissie Levy and Richard Fleischmann.  And LOVE the previews I've seen of it.  It looks like they've done a great job of theatricalizing a film, making the stage version a special thing all unto itself.  I hope so!

NOW. HERE. THIS. (April 15)
I can't think of anything better than seeing old friends again after a long time apart.  And that's how seeing this show feels for me.  I loved, loved, loved [title of show] and Heidi, Susan, Jeff and Hunter continue to rock my world.  My one regret?  I'm seeing the last performance! 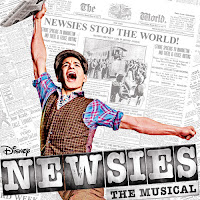 NEWSIES: THE MUSICAL (April 15)
Another movie turned into a musical.  Yawn, right?  But I loved the film, and I love Disney.  And I really love the team behind the stage version, particularly Alan Menken and Harvey Fierstein.  And of course, there is the greatness of Jeremy Jordan, and the cuddly cuteness (not to mention the talents) of Andrew Keenan-Bolger.  It also boasts two of my favorite dancers, Ryan Steele and Kyle Coffman.

EVITA (April 21)
Super excited to see a new production of one of my favorite shows, and one of my three favorite Andrew Lloyd Webber scores.  And very much looking forward to Ricky Martin and Elena Roger.  Add the choreography of Rob Ashford and I am really pumped to see this one. 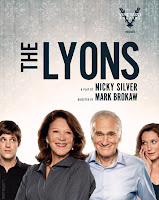 THE LYONS, CLYBOURNE PARK, DEATH OF A SALESMAN, VENUS IN FUR...

As you can see, there is a lot coming up on my plate!  I can't wait to share it all with you!  And please tell me what you are looking forward to this spring on stage!

Labels: 2011 - 2012 Season, Can Get It, Carrie, Evita, Ghost, Jesus Christ Superstar, Leap of Faith, Newsies, Nice Work If You, Now Here This, Once, Peter and the Starcatcher, regional theatre, the Best Man