For someone so young, up-and-coming star Derek Klena has already had a wealth of experiences that any actor would envy.  Or singer.  Or athlete.  Yes, athlete.  And now he is making headlines in New York in the high-profile revival of Carrie, playing good guy Tommy, the boy who takes Carrie to that ill-fated prom.

In this first of a two-part interview, Derek talks about his brush with American Idol, leaving UCLA for a chance at a NY stage role, and what it was like telling his coach and teammates that he was leaving the pitcher's mound for microphone and stage. 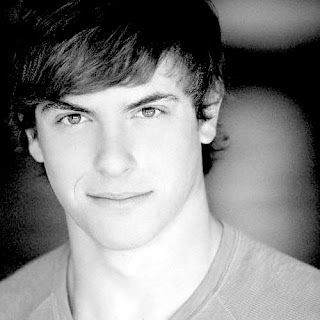 
Jeff Kyler: So, this is your New York debut - what a way to start your career on the East Coast!  I understand you took time off from UCLA to do Carrie.  Was that a difficult decision or a no-brainer?
Derek Klena: When I started school I knew that if I did book something out in NY or a tour of some kind that I would take time off school, so it wasn’t a very hard decision once I got the offer for Carrie that I wanted to take the opportunity to perform in such a special production in NY.

JK: How important is it to you to finish up after Carrie is over?
DK: It is important to me to go back to school and finish up my degree in Psychology at some point whether it is sooner or later.

JK: In addition to your studies at UCLA and doing lots of regional theatre, I’ve read you play baseball, too.  Do you still play for UCLA?
DK: My freshman year at UCLA I played on the baseball team, not really knowing if I wanted to pursue theater as a career. But after that first year I knew I wanted to keep acting and performing, so I stopped playing baseball and started auditioning around Southern California.

JK: I always wonder how it is for people who are both athletes and theatre people.  Generally, the two worlds stay pretty separate, right?  How did your teammates feel about your performing on stage?
DK: My teammates at the time did know that I could sing and acted because I got the opportunity to be a part of American Idol that year and actually had to talk to my coach about getting a couple days off from practice to participate in Hollywood week. It was definitely an interesting conversation to have with a college baseball coach, but he and the rest of the team were very supportive.

JK: What elements of baseball/team sports come into play when you are in a production and vice versa?
DK: I feel that playing sports and performing growing up went hand and hand. It really taught me how to prepare, how to take care of my body and how to perform under pressure in front of a crowd. Being a pitcher when I played baseball, it was always so important to keep focused and to not let any of the extraneous variables affect my performance.

JK: Fans of American Idol might remember you from Hollywood Week in Season 9 of that show.  How accurate is the portrayal of the audition process on the show?
DK: The audition process is definitely different than how they portray it on TV. There are about three rounds before you even get in front of Simon (Cowell) and the panel of judges that take place over a couple months.

JK: Does that experience make auditioning for subsequent jobs easier?
DK: I always feel like an audition is an audition no matter the scale. Being that millions of viewers could potentially see your audition for American Idol did make it slightly more nerve racking, but all you can do is just prepare like any other audition.

JK: Original Carrie star Betty Buckley recently went very public in defense of Broadway, Broadway performers and the prejudice she feels is being perpetuated by the comments of the Idol judges, particularly Randy Jackson, about contestants sounding too “Broadway” and the like.  How do you feel about that issue, having been on both sides of it?
DK: I think that saying someone is “too Broadway” is just an excuse for saying someone may sound too legit. I agree with Betty Buckley’s concerns and also feel that it is kind of degrading for Randy and the rest of the judges to label someone as “too Broadway,” insinuating that they don’t have what it takes to make it in the music business.

JK: So… your leading lady, Molly Ranson, wasn’t even alive when the first production of Carrie came to Broadway.  I assume from the cast photos I’ve seen that that is the case with most of you!  Given your relative youth, what do think you bring to telling of this now nearly 40 year old story (the novel was first published in 1974)?  Is it still contemporary and poignant to your generation?
DK: I feel that the morals and themes addressed in Carrie are universal and timeless. Bullying and expressing yourself no matter what others may think is always going to be an issue regardless of the time. That has been our goal through the rehearsal and preview process, to find the truth and realism in the story so that the audience can really relate. Before we would even block the scene in rehearsal, Stafford Arima would sit down in a circle so that we could just talk about our own high school experiences and ways that we can relate to our characters. The entire creative team and writers all were supportive of our opinions and insight and encouraged us to add bits and pieces of ourselves to the piece.


CONTINUE TO PART TWO OF THIS INTERVIEW BY CLICKING HERE!

Coming soon in Part 2:  Derek talks about the Carrie experience, preparing for a new take on an old flop, and just how amazing Marin Mazzie is!