PLEASE TAKE A MOMENT TO TAKE THE MONTHLY POLL AND TO VOTE IN
ROUND SIX OF "HOT/HOTTER" - BOTH ARE TO YOUR LEFT!

(To find out how this is calculated, please click HERE.)
(-) - Last week's position in the Broadway Top Ten


Time Out New York's 25 Biggest Broadway Divas of All Time 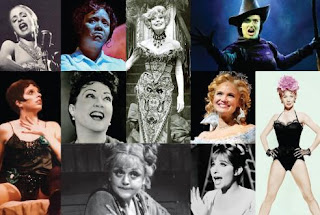