In Part 1 of this interview, Derek Klena, one of the young stars of the off-Broadway revival of Carrie talked about his experiences as an athlete and performer, and particularly his experiences as a Hollywood Week finalist during season 9 of American Idol. (Click HERE for Part 1.)

Today, the interview wraps up with a chat about his experiences in creating a new version of such a notorious theatre piece.  He also talks about working with director Stafford Arima and star of the show, Marin Mazzie. 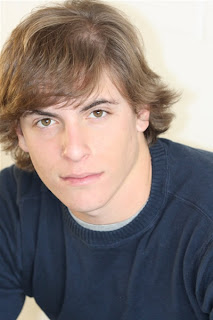 Jeff Kyler:  The press materials and various interviews with cast and creative team members suggest that this version of Carrie will focus on the more human side of the story and less on the supernatural (though that will, of course, figure prominently).  Given that the original was a huge special effects laden spectacle, and it was less than successful, how do think a more stripped down, bare bones style production will help tell the story better this time around?
Derek Klena:  Finding the realism and the truth within Carrie has definitely been our goal through this exploration process. I think stripping it down and not focusing on the special effects as much has only enhanced the story telling. Yes, there are still some magical elements to the show because of Carrie’s telekinetic powers, but by not relying on the effects to drive the show, the audiences have been drawn in and really feel the pain and sadness that Carrie and Margaret White experience.

JK:  Lysistrata Jones and Bloody Bloody Andrew Jackson both had much critical success on and off Broadway, yet both flopped uptown, with audiences seeming to want more bang for their buck.  If this production of Carrie really takes off and transfers to Broadway, do you think the changes made already are enough to satisfy both lovers of good theatre and people who expect huge production values?
DK:  I think so! The visual set of our show may look dark and run-down, showing the remains and fragments of the demolished gym after Carrie’s destruction, but Sven Ortel’s amazing projections and Kevin Adams’ lighting design transform the dark stage into this vivid and imaginative image of Sue’s memory.  Even though some of the coming audiences want to see the blood and guts of Carrie, I feel that they won’t be disappointed with our more artistic take.


JK:  Tell us about your character, Tommy Ross.  How does he fit into Carrie’s story?
DK:  Tommy Ross starts as the stereotypical high school jock with a sports scholarship, but he later reveals that he has a hidden love for writing and poetry when he asks his girlfriend, Sue Snell, if he should put the “whole sports thing aside and see if (he’s) got what it takes to be a writer.” This hidden aspiration of his is what connects him to Carrie. She also has these hidden desires that are hindered by everyone else’s negative depiction of her.

JK:  I saw a video of a great new duet, “You Shine” written for this new version of Carrie and sung by you and Christy Altomare (who I loved in Spring Awakening’s tour!).  How is it to be making your debut in such a famous show AND getting to debut a brand new song in the show, and written by Oscar winners?  You must pinch yourself every day!

DK:  Going into this production I really had no idea how amazing this whole process was going to be!  Getting to play alongside all this amazingly talented group of actors and creative team has really been unbelievable.


(Rehearsal video from Playbill Online.  "You Shine" - music by Michael Gore, lyrics by Dean Pitchford, book by Lawrence D. Cohen, based upon the novel by Stephen King)

JK:  What kinds of things have you done to prepare yourself for the Carrie journey?  Did you read the book, watch the film versions, or maybe watch a bootleg of the original Broadway production?
DK:   When I first got the audition for Carrie I really had no idea what it was about or the history behind the story. I watched the movie and tried to find clips online from the original production, just to get a grasp of what it was all about.

JK:  How has Stafford (Arima, director of Carrie) helped prepare the cast to take the show in new and exciting directions?
DK:  Stafford Arima is amazing! He really encouraged us to put pieces of ourselves into our characters and to not make the obvious choices. Like I said before, we would sit in a circle and discuss our own experiences through high school and how it affected us before we would even read through scenes. This really helped us bond as a cast and as a general group of high school students. Stafford, the creative team, and the writers emphasized having an “open room” where we all felt comfortable sharing our personal thoughts and opinions, which also made the rehearsal process so fun and exploratory.

JK:  You also get to work with one of Broadway’s greatest talents, Marin Mazzie.  What have you learned from watching her and the few other cast members with a lot of New York experience?
DK:  Getting to work with the Marin Mazzie has really been an unbelievable opportunity. She is not only one of the most amazing actors I have ever gotten to work with, but she is also such a warm-hearted generous person. I feel like being a part of such a young talented group of actors has pushed me to up my game and work harder at stepping out the box and finding new and interesting choices for my character.

JK:  What do you think you and the less experienced cast members have brought to the show that maybe Ms. Mazzie can say she learned from all of you?
DK:  The fact that so many of us are young I think brings a youthful realness to the show. We could all imagine and relate to all the themes and messages in Carrie because it wasn’t that long ago that all of us were in high school. This really helped us depict a realistic image of the high school social life and teenage struggle that each of us go through at some point or another. I think the fact that we all would have these open discussions in rehearsal about our personal experiences probably helped Marin, in a way, get a grasp of what Carrie felt and dealt with.

JK:  How do you think this Carrie will benefit from the combination of experience and youthful excitement?
DK:  Everyone in the cast, creative team, and MCC have worked so hard at keeping this a true and real story about a troubled girl and her struggle to fit “in,” and I feel our cast’s youthful spirit and ambition will help this message shine though.

JK:  Well, Derek, congratulations on your most auspicious debut!  So far, the buzz on the show has been so incredibly positive.  I certainly hope the show is a huge success both for the piece and for you, personally and professionally.  Thank you so much for taking the time to answer my questions!

(Photos from UCLA.edu, MCC Theater, Getty Images.  Video the property of Playbill Online, MCC Theater and the producers and creative team of Carrie.  Video used for illustrative purposes only.  No copyright infringement intended.)