PLEASE TAKE A MOMENT TO VOTE IN ROUND 8 OF "HOT/HOTTER"
AND THIS MONTH'S  POLL QUESTION!
(CLICK THE ICONS TO YOUR LEFT)


THIS CONTEST IS OVER!  THANK YOU TO EVERYONE WHO ENTERED!
THE ANSWERS ARE BELOW! 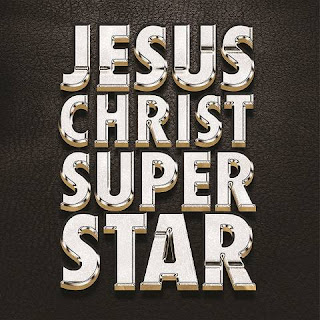 Since its Broadway debut, JESUS CHRIST SUPERSTAR has thrilled millions of theatergoers worldwide: mesmerizing them with its passion, captivating them with its story and entrancing them with its anthemic title song. And now, the two-time Tony Award-winning director of Jersey Boys, Des McAnuff, brings a bold, new vision to the classic rock opera by Tony, Grammy and Academy Award winners Andrew Lloyd Webber and Tim Rice.

Praised by Variety as “A TRIUMPH” and hailed by The Toronto Star as “AN ABSOLUTE KNOCK-OUT,” this thrilling new production has already won rave reviews at The Stratford Shakespeare Festival and Charles McNulty, chief critic of The Los Angeles Times, proclaims, “Go and observe the benevolent gift of this revival which has had the miraculous effect of turning an Andrew Lloyd Webber denier like me into a believer.”

Don’t miss your chance to experience one of the most popular musicals of all time as it gets ready to rock Broadway all over again.  Now playing at the Neil Simon Theatre.  For more information visit SuperstarOnBroadway.com


And JK's TheatreScene is pleased to present you with the chance to see the show for FREE!  That's right!  Today begins a new contest for tickets to see one of Broadway's new shows! 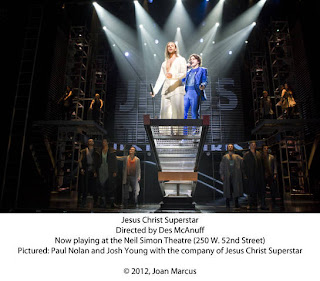 
Check back each day this week for a new question.  Collect the answers to all 5 questions, then enter to win on Friday, March 16!


(Monday) 1.  As of March 12, 2012, both Andrew Lloyd Webber and Tim Rice will have three shows giving performances on Broadway.

(Wednesday) 3.  All of the following Biblical figures have their name in a song title in Jesus Christ Superstar EXCEPT:

AGAIN, THANK YOU FOR ENTERING!
THE NEXT CONTEST STARTS MONDAY, MARCH 19!