YOUR VOTE IN THIS WEEK'S "HOT/HOTTER" IS VERY IMPORTANT!
THIS WEEK YOUR VOTE WILL DETERMINE THE 2 FINALISTS
IN OUR SEARCH FOR BROADWAY'S MOST UNIQUELY HOT GUY!
VOTE NOW BY CLICKING ON THE ICON TO YOUR LEFT!


One of my favorite theatre bloggers, Ken Davenport (he also produced Godspell), recently wrote about why he allows comments - encourages them, even.  I, too, think your comments and questions are valuable and make me a better blogger.  You might even have noticed that at the end of each and every blog, I have listed three different ways you can give me feed back.  You can Tweet me, email me, or, easiest of all, click a box at the very bottom of that day's blog.  You are also welcome to leave comments there as well.  And I will reply to just about anything you send my way, even if you are telling me something you don't like or agree with.  About the only thing I don't respond to or print are things that are generally offensive or personal attacks.

Anyway, one of the points Mr. Davenport makes in his blog is that if he gets the same feedback or question 3 or more times, he knows it needs to be addressed.  I couldn't agree more!  (Click HERE to see his blog.) And to that end, today, I'll be addressing just that - I've been asked the following things 3 or more times in recent weeks:


"creatives": This is a term I use when referring to the creative staff of a show.  That is anyone who isn't actually performing the show or putting up the funds for it.  They include the writers (playwright, book writer, composer and/or lyricist) the designers (lighting, set, costumes and sound), and directorial staff (director, choreographer, musical director, specialty artist).


"proscenium": The term refers to the stage "frame," literally the structural frame that is in front of the stage space the audience sees.  The audience is seated facing it in a relatively straight forward manner, kinda like we sit in front of a TV or movie screen.  If you've seen Mary Poppins, it is the very thing the Bert walks and dances up and around and upside down on.  Peter and the Starcatcher has a now famous "homemade" one. The majority of Broadway houses have proscenium stages, and many times a musical in particular will have performance space in front of it, called the "apron" (where footlights used to be put and sometimes still are, and they also cover most of the pit, and playing spaces are created there, too.  Some of the action in Wicked takes place on "stages" outside the proscenium.  Related to that is the "thrust" stage, which has the traditional proscenium and stage space AND a considerable playing space in front, with the audience generally seated around the thrust (think large "U"s).  The Vivian Beaumont at Lincoln Center is just such a space.  Then, there is in-the-round theatre, where there is no proscenium, and the audience literally sits all the way around the stage space.  Circle-in the Square is the only Broadway house that is configured in this way, most recently for Lombardi and Godspell. (If you saw Rocky Horror Show or Spelling Bee there, those shows had the space modified into a severe thrust space.)

"logo": When I use this term when I evaluate them, I am referring to the icon and/or photo image and typography used for the title.  They usually go hand-in-hand.  (There are a ton to look at up top under "Logos".  The "yin/yang" of Elphaba and Glinda that we all recognize from Wicked and the orange fuzzy subway "Q" are some current famous ones. I'll bet that the photo of Steve Kazee and Cristin Milioti staring awkwardly at each other paired with the guitar and squiggly guitar string spelling out "Once" will become a famous logo as the show continues its run.  As it is, the "guitar string" Once is already a logo by itself. 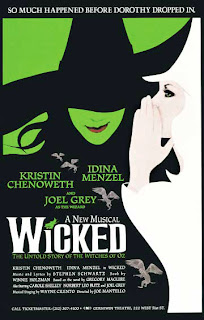 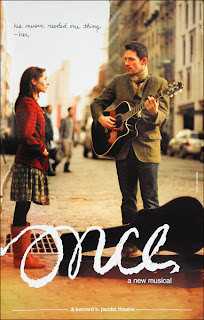 "tagline": The term as I use it (also used in association with film and film advertising) refers to a slogan used  with the logo to make a point about the show.  Some are simple and straight forward: "Broadway's longest-running musical" (Phantom); "The World's Most Popular Musical" (Les Miserables).  Some are show-specific selling points: "Now and Forever" (Cats), "The Best Musical.  Ever." (A Chorus Line).  And still others help to clarify the story: "Some Much Happened Before Dorothy Dropped In" and "The Untold Story of the Witches of Oz" (Wicked) or "His music needed one thing...her." (Once).  This term is not to be confused with a sub-title, like "A New Musical" or "The Musical" or "A Play."

"rant/rave":  As I use it, a "rant" is strong opinion in reaction to something.  For me, it is generally long-winded and full of support and examples.  What it is NOT, for me anyway, is necessarily, a negative thing.  I can be very much ranting about a positive thing as much as a negative thing.  I personally reserve the term "rave" for a enthusiastically positive review of a show or performer.

2.  Jeff, we who read your blog regularly know your favorite recent show is next to normal, but what is your favorite show of all time?  Your favorite performers past, present and future?

I'm pretty sure I've answered this one before, but you asked, so here it is:  FAVORITE SHOW OF ALL TIME: A Chorus Line (with Kiss of the Spider Woman, Grand Hotel, Sweeney Todd and The Mystery of Edwin Drood all right up there with Line and Normal)