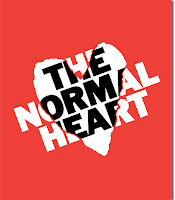 
Based on the Tony-winning 2011 revival, this production of Larry Kramer's The Normal Heart, reunites the entire creative team and some of the Broadway cast.  As such, my focus upon returning to property was on the performances, more so than the staging, which under the careful hand of George C. Wolfe remains tight and profound.  The somewhat more intimate Keeger Theatre in no way diminishes the impact of this explosive drama.  No one holds back, and their proximity to the audience only adds to the immediacy of the piece. 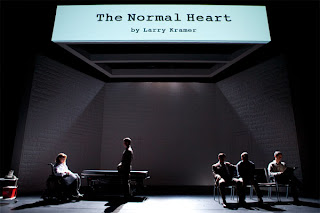 Even the actors in the smallest roles have terrific presence and impact.  Chris Dinolfo, who represents the first person in Ned Weeks' circle to have AIDS, and Tom Berklund, who represents to first really frightening representation of the physical toll the disease takes, both bring a profoundly sad and very scary physicality to the disease that even today most people give little thought to.  That Kramer begins his play this way makes the nearly 30 year old work as pertinent today as it was when it debuted.

John Procaccino, as the "straight/legal" voice of the piece - not to mention the brother of Ned Weeks, provides a sobering point of view, while delivering what ultimately proves to be a thoughtful and very human performance, even as he often has to tell a side of the issue that people don't want to hear.  Equally difficult are the two roles performed by Jon Levenson, who plays Mayor Koch's aide who has nothing to say that the Gay Men's Health Crisis wants to hear AND the Examining Doctor at the CDC who denies the only doctor who seems to care a single penny of research money, let alone any sort of recognition.  He is a presence in both roles.

One of my favorite younger actors, Christopher J. Hanke brings a sense of humor to the piece as Tommy Boatwright, Southern "belle" and friend to all.  While he is considerably more flamboyant in the role than his Broadway counterpart (Jim Parsons), Hanke is never over the top or even particularly stereotypical.  Rather, he is a glimmer of warmth in a vast and bleak landscape of anger and dispair that threatens to swallow the company whole.  Another of my favorite actors, Michael Berresse plays the good natured and necessarily nervous Mickey, whose job with the city is threatened when his role in the group going up against the Mayor of New York is exposed.  His second act monologue is a highlight of the production, bringing the grim realities of the AIDS era and the ramifications of identifying oneself as gay to frightening light.  Sniffles were heard all around, myself included.  Times have changed in terms of coming out and job security, but not that much, either.  The handsome Nick Mennell takes on the role of Bruce Niles, bank CEO and "sexy" face of the community, but steadfastly closeted.  It is hard not to understand why Bruce resists coming out of the closet, and the strength of Mennell's performance, tempered with an under current of fear and regret, makes his journey in the piece emotionally satisfying.  His act two monologue detailing the gruesome death and mortifying lack of public sympathy for a former lover provides both character and audience a moment of catharsis and a turning point in the play's insistence that we be roused in anger to fight the fight.


As far as this particular production goes, the actors who have taken on the Tony-winning roles of Dr. Brookner and Felix Turner have it the toughest, so memorable were the star turns by the Broadway company.  So it is both a relief and a pleasure to report that both Patricia Wettig and Luke MacFarlane give amazing performances.  Wettig's measured performance leads you to a powerful, passionate monologue toward the end of the play.  Her tears of rage and anguish give the cold, pragmatic doctor a very endearing touch of humanity.  Aren't we all glad that we had such a fearless woman (and all of the pioneering doctors she represents) on our side in those early days?  Mr. MacFarlane, who appeared in a much smaller role in the Broadway revival, probably had the biggest shoes to fill, and to be completely honest, I wasn't sure he had the depth needed for the part.  My concerns were quickly allayed.  Don't be fooled by his matinee idol looks, winning smile (dimples and all) - he may look like a living Ken doll, but he is so much more.  Coy and charming, warm and strong, he is the ideal man.  Under better circumstances, he'd have been a poster boy for gay marriage.  Instead, he puts a youthful, all-American face on the disease, and it is difficult to watch MacFarlane undergo the physical challenges facing a man in the late phases of AIDS.  His is a thoughtful, demanding performance that ultimately provides the emotional center of this angry play.

I imagine all productions of The Normal Heart depend upon the quality of the performance of the actor playing Ned Weeks.  Fortunately, this production is in good hands with Patrick Breen in the role.  I've seen Mr. Breen in a number of productions, but nothing prepared me for his powerful, passionate, relentless performance.  It is a fine line to walk when playing a character who is by necessity loud, overbearing, self-involved AND altruistic.  The majority of the time he is screaming to be heard above the din of silence he is greeted with at nearly every turn.  Breen makes you take his side, even as you have to agree with all of the reasons the very organization Weeks founded dismisses him from having a role in its future.  He brings the role to an emotionally satisfying end during the final scenes where he is taking care of his dying lover.  His emotional breakdown and ultimately selfless caring that justifies that nagging feeling all along that Weeks is a pain in the ass - right or wrong - but you can't help but admiring and even loving the guy.  He not only talks the talk, he walks the walk.


If you are anywhere close to Washington D.C., you should take the opportunity to visit the magnificent facility of Arena Stage and see the excellent production of The Normal Heart playing there until July 29.