The afternoon before we saw Trouble (see those "note" HERE), Mike and I saw another New York Musical Theatre Festival entry called Stuck with a book, music and lyrics by Riley Thomas.  This production is exactly what I envisioned all NYMF "full productions" to be: fully staged both directorily and technically, with a company of actors fully rehearsed and in control of the characters they are playing.  Again, I also go into these shows understanding that time and budget by necessity keep things simple.  So while the set pieces may be a little rickety and the lighting may be simple, it is nice to note that David Goldstein's design in both areas reflects real thought and effort.  The same can be said of Stephanie Alegado's costume designs.  And both choreographer Tim Young and director Michael Berry keep things moving at a brisk pace, no easy task considering that the entire 85 minute, intermission-less affair takes place on a stalled subway car.  Both alumni of Broadway's next to normal, you can see its influence in the change of perspective and use of the subway poles as things to hang on and swing around on in both the direction and movement. 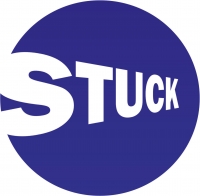 One of the reasons we picked this production was because it sounds, on paper at least, like another musical that I really enjoyed, Happiness, and I wanted to see how a similar scenario might be played out in different hands.  Since Stuck (like all NYMF productions) is still a work in progress, this blog is not intended to be a full-out review, but rather my impressions of the piece as it currently stands.

Grade: Stuck may already be pretty much all it can be - it may take some serious overhauling to get this train moving in a more original direction.


What Works: The Book: Stuck has an interesting framing device in the narrator, Lloyd, a mysterious homeless man who waxes philosophical and dispenses wisdom and props from his enormous bag.  While narrators are hardly a new thing in drama, this one offers a unique perspective, which has the potential to inform the whole piece.  How many times have all of us walked past a homeless person and ignored the poor soul, dismissing him/her as a dirty eccentric, and silently thanking whoever that it isn't us?  A couple of the other characters have the potential to offer a unique perspective - a young guy is stalking a young girl and they are trapped in the same stalled car.  She's a pretty, if paranoid girl and he is a little "off the beam," obsessed with a comic book character.  She whines; he broods.  They are interesting.


What Works: The Score:  In Riley Thomas' 15 song score, he proves he can write in a variety of styles - traditional Broadway, modern pop, modern Broadway, ballads, up tempos and even a Samba.  A few stand out nicely: The Prologue sets up the framing device and tone, "Magnificent Maggie" is a catchy tune that uses a unique comic book character to reveal much about the boy stalker, and "I Break Into Your House," offers a somewhat interesting perspective on racial profiling from a the young girl being stalked (she's Asian).  And both "The Subway Samba" and "What Everyone Wants" prove that he can do a decent group number with interesting harmonies.

What Works: The Cast: Most of the six cast members are good, each contributing what they can to the piece. Danny Bolero does a nice job as Ramon - he sings very well and manages to make his character much more than a stereotype; EJ Zimmerman as Alicia, the Asian girl, is given the unenviable task of addressing racial issues head on in her big solo, and does so beautifully.  Mel Johnson, Jr. is everything his homeless man/mysterious narrator role allows him to be.  The best of the lot is Tim Young as the brooding young man.  He sings well and acts the part especially well, even when he's not the focus.  Of course, he also has the benefit of playing the best written and fully realized, most interesting character.  Both Beth McVey and Anita Welch do alright, but in both cases, I left wondering "they couldn't have found anyone better?"  To be fair, both actresses play characters that are cliches of cliches.  Which leads me to...


Just How Stuck is Stuck?: Well, there are two big issues with this musical as it stands.  One, nearly every opportunity to make this static/stagnant scenario a unique, interesting piece is started and abandoned (the narrator/unique perspective on the homeless guy stereotype, directly addressing issues in a no holds barred way).  It often feels like Mr. Thomas is throwing out every idea he has and is trying to see what sticks instead of using the risks he does take and seeing them through the entire piece.  Two, and most importantly, when all is said and done, very little of the show takes us anywhere we haven't been in dozens of other musicals, movies or TV shows.  Too often, the lyrics in the songs I didn't list above not only go into cliche, but boring platitudes with obvious rhymes.  And there are the uncomfortably dull stereotypes - the African-American girl is angry, the Asian girl is self-conscious and quick to judge while feeling constantly judged, the quiet middle aged white woman clings to her religion like a crutch, barely even angry that her son has committed suicide.  And just when I thought, "Finally, a cross-section of society cast DOESN'T include the gay guy!" we find out that one of the reasons her son killed himself was because his love for another guy ("Mama, I love him...") has gone unrequited.  Suicide as cliche is as about as uncomfortable as it gets, and it is the one time I am glad a subject was touched and dropped fast.

Unfortunately, all of the cliche and stereotyping point up that fact that Mr. Thomas has painted himself into a corner.  Maybe a collaborator with a unique perspective could add to the book and lyrics.  Stuck is a pleasant little one act musical, but it could be much more interesting.  Imagine what it would be like to be trapped with a more honest cross-section of life with a little more at stake than passing the time.  Oh, wait.  That musical has been done already.  It is called Happiness.